This time, a hunter uses an unconventional strategy during a deer hunt 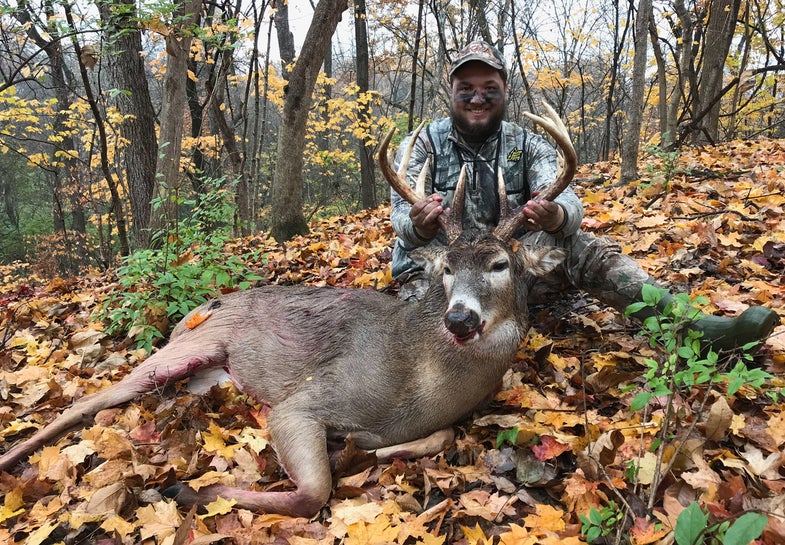 After I posted about oddball tactics for pheasants, ducks, and turkeys the other week, I received a note from Nick in Illinois, who shared an oddball deer tactic with me. As you can see from the picture, it worked.

Nick was hunting in Illinois during the rut back on November 12, and it came down to the last day. Bucks had been chasing does all week, but Nick still hadn’t connected. He was sitting in a stand on a ridge saddle with steep sides that had several trails leading up to it from the creekbottom below. Once the early-morning flurry of deer traffic ended at about 8:15, Nick climbed down from his stand.

It had rained the night before, so the damp leaves deaded his footfalls as he snuck about 60 yards along the saddle, staying down to keep out of sight of the deer in the bottom. Then he turned around and ran back to his stand, grunting like a buck after a doe and doing his best to sound like a deer, not a human, as he ran.

He climbed back into his stand, got ready, and not three minutes later this buck walked up to his stand from the direction Nick had been running. He was out of breath, but not too out of breath to make the shot.

I have seen turkeys blow up into strut when they heard a hunter’s footsteps that they mistook for a rival bird, but have never heard of it working for deer. But it should work, and it did.