The One: Catching Trout with the Best Fly in the World

Some days, if you're lucky and if you listen closely, the trout will tell you exactly what they want 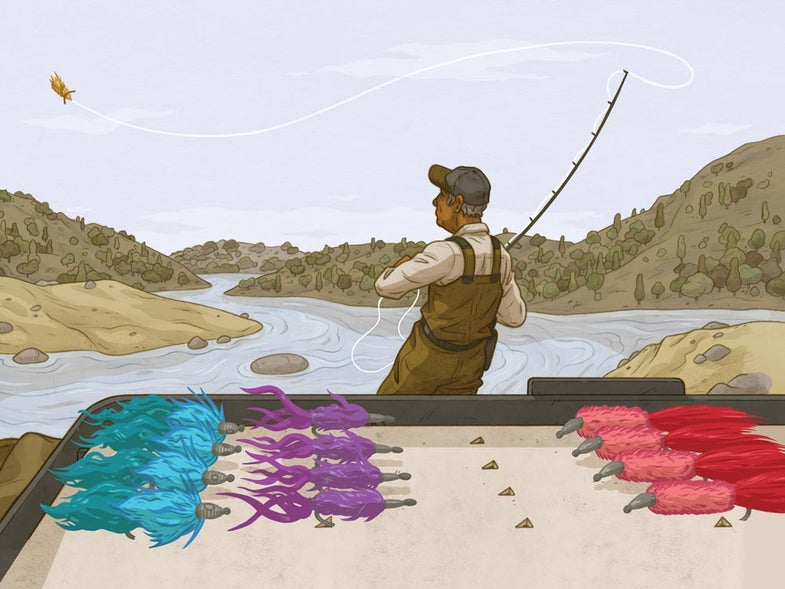 The fish were picking at the fly, plucking and nipping at its tail in the slower pools, but slashing at the bug in the swift water with maybe a 40 to 60 percent commitment rate. The trout—rainbows, cutthroats, and the occasional brown beast in this northern Montana creek—had already turned down all of the standard menu choices for this water. They rejected the Cat Puke, a big wedge-headed bank crasher that killed them a week ago. They wanted nothing to do with any Green Drake—neither the giant-hackled pattern that was suggested at the fly shop nor the slimmer parachute version. But they sniffed and sipped at the golden stonefly. It was a kinda-sorta bite. Our first clue.

While my buddy Land Tawney handled the raft oars, I went to work on the fly. I had only one version of a golden stonefly in the box—a bullet-beaked meat bug nearly 11⁄2 inches long with tiger-striped rubber legs that looked like they belonged on a mosquito hawk. That’s where I started. I trimmed a half-inch of rubber off each leg, and the strike rate stepped up. The more I trimmed, the more fish I caught, and by the time each leg was down to a half-inch long, I was left with a snub-nosed size 4 fly I could skip like a rock. It looked like I was chucking a mustard-yellow cigar stub through the air. And the trout went nuts.

Maybe it was me. Maybe it was as simple as getting the timing right. The canyon had steepened and the stream ran fast, and it could be that we had simply floated into a zone where the fish were on and they would have eaten a greasy foam earplug as readily as my hacked-up stonefly. But suddenly there was no time to ponder each pocket of water, no time to mend, no time to look downriver to plan for a drag-free cast. Every inch of water was a trout pocket. Four out of five casts bent the rod. There was no time to think about anything. There was only time to cast.

Veteran trout fishermen know this scenario. There are days the fish will eat anything, and days they will eat all you can feed them…but only if you feed them the right fly, of the right size, on the right tippet, with the perfect cast. For many anglers, figuring out this Rubik’s Cube of flyfishing—matching the hatch—can be a sublime pleasure. I have friends who will chuckle and grin at each rejected fly. The thornier the problem, the calmer they get. A half-hour can pass in the same pool, working the same trout, and they are positively gleeful.

But I run out of patience not long after I offer up, say, the third perfect fly. I can feel my anxiety rising with every snubbed cast. I am easily offended by fish. You don’t want the diaphanous-winged spinner? The CDC fly developed in freakin’ Switzerland? What the hell is your problem? I have to talk myself into a state of calm or, just as often, cede the victory and head up the creek.

I don’t mind losing to a fish, but I’ve never quite figured out which game we’re playing. Am I matching wits with a wily creature, or is something more primordial going on here? Most flyfishermen scratch their head, open fly box in hand, working through the metaphysical questions that bind together bait dunkers and metal chuckers and fly-casters alike. Are these fish really smart? Are they down there making cerebral choices based on nutritional value versus effort expended divided by exposure to predation? Or are they intellectual dullards that simply stay within the constraints of habit and instinct honed by evolution?

Beats me. But what’s really smart is to pay attention to the fish. Especially when they’re telling you everything you need to know. I babied my last of the magic mutant golden stoneflies until it snagged on a rock and we couldn’t stop the raft, and the line parted with a snap swallowed up by the rushing of the water. There was no hand-wringing over what to do. We had a car stashed at the campsite, so in the last of the day’s light, as Tawney made camp by the river, I careened down 20 miles of dirt road and 30 miles of blacktop, trying to make it to the nearest fly shop before it closed. The fish had spoken.

Tawney and I broke camp the next morning with a fresh quiver of flies and pushed the raft into the creek. There wasn’t a stonefly in sight. Pale morning duns pillowed up in shafts of sunlight low on the water, tempting me sorely. That was food. Surely a trout would go for the low-hanging fruit.

Instead, I tied on a stonefly.

My second cast snagged in the jaw of a 14-inch cutthroat trout, and Tawney howled to the sky, “It’s on, brother!” He pulled on the oars, and I could feel the bones of the creek in the bottom of the raft, and we gave them what they wanted—again. I cast like I was playing whack-a-mole, firing at every piece of water large enough to wet a fish. The trout were as hungry as baby birds, and I fed them rapid-fire, without thinking, because I don’t get this that often. The fish told me exactly what they wanted, and I had a fly box stuffed with exactly the right fly. What had most likely occurred was I blundered into the right place at the right time with the right stuff, but I still felt like the best damn flyfisherman in the world. I would have patted myself on the back, but I simply didn’t have the time.