(Editor’s note: This is the first of a three-post series about the Yellowstone River, the longest undammed river and one... 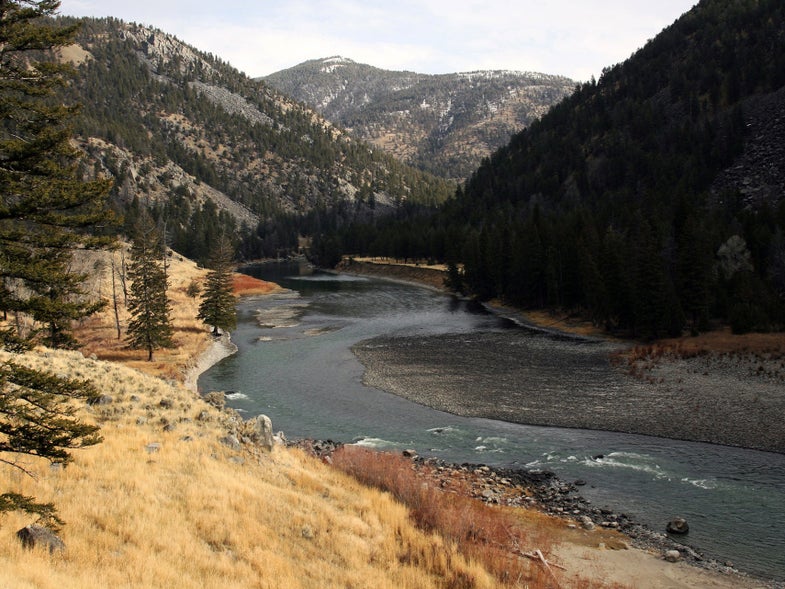 (Editor’s note: This is the first of a three-post series about the Yellowstone River, the longest undammed river and one of the best wild trout fisheries in the continental U.S.)

When I think of the Yellowstone River, I remember a late October day a couple decades ago, jump shooting big redleg mallards on the braids upstream from the Pine Creek bridge. What can anyone say about such a memory? That the last of the leaves on the cottonwoods were a deep butter-yellow, or that my Lab at the time, a powerhouse named Bear- he would die at age four due to my negligence- worked like a champion, or that he and I stopped above a little plunge pool on a side channel and watched a big brown finning there in the current, all of it under a wash of late autumnal light, as if we were moving in an artwork wrought by the very hand of the Creator? I have never been back to that particular place again.

But I’ve been blessed to see a lot of the Yellowstone’s 692 miles, from its headwaters in the Absaroka Range on down. I’ve fished and floated from Mallard’s Rest, swam the mighty river on a scorching August day below Columbus, caught big rainbows below the mouth of the Boulder. Last summer, working a river mapping job on the Missouri, our crew stopped for lunch at the mouth of the Yellowstone (the mouth is just upstream from the boom-bust town of Williston, North Dakota), wading with reverence in deep mud and clouds of mosquitoes at what certainly must be the epicenter of the history of our American West, from the first people to see it after the ice age to the Native American nations to the fur trappers and steamship pilots and outlaws of the 19th and early 20th centuries (there is a heck of a channel catfish hole there now.) The Yellowstone is America’s river, and one of the truly great rivers of the world. How we treat it, respect it, use it, is a metaphor for how we view our nation and ourselves.

And that is pretty scary. Because for the past two decades, we’ve been treating the Yellowstone River like a third-world ditch. We’ve been asking everything from it, and giving nothing back.

On August 19th last summer, state officials in Montana closed down 183 miles of the upper Yellowstone to all recreational use. Fish were dying, starting with the abundant mountain whitefish and moving to the rainbow and Yellowstone cutthroat trout. The culprit for a fish kill that shut down the single largest engine of Montana’s recreational economy, putting guides and outfitters out of work and emptying hotel rooms of tourists? A tiny parasite called Tetracapsuloides bryosalmonae, which causes proliferative kidney disease (PKD) in fish, leading to a lethal anemia.

The parasite was not known to be in the upper Yellowstone before it began killing off fish from the border of Yellowstone National Park to 100 miles downstream at Big Timber, but it would have been a miracle if something new and destructive did not emerge from the Yellowstone last summer: we were using the river at record levels for fishing, swimming, and boating, even as a meager snowpack and relentless irrigation withdrawals had reduced its flow to a near-historic low, and record-high water temperatures of 70 degrees for day after day (healthy temperatures for the river are mid-50s) were turning our mightiest coldwater river into a blooming Petri dish. The closure was lifted after mid-September, when more seasonal temperatures and some rain returned and cooled the river down, bringing the fish kill to an end. Economists at the University of Montana estimated that the closure cost local businesses between $360,000 and $524,000, in addition to the unquantifiable effects of tourists and fishermen who will choose another healthier, more carefully stewarded river for their future vacations and trips.

What the fish kill did mostly—one cannot say it was a wake-up call, because no concrete plans exist to remedy the real issues behind the parasitic outbreak- was point out that a river in a hot, dry world is being asked for more and more every year, and that every natural system has a breaking point.

(Next: How taming the Yellowstone and drawing from it has changed the ecological process of the river.)