F&S Classics: Legend of the Bowie

The story of America's most famous, deadly, and mysterious knife 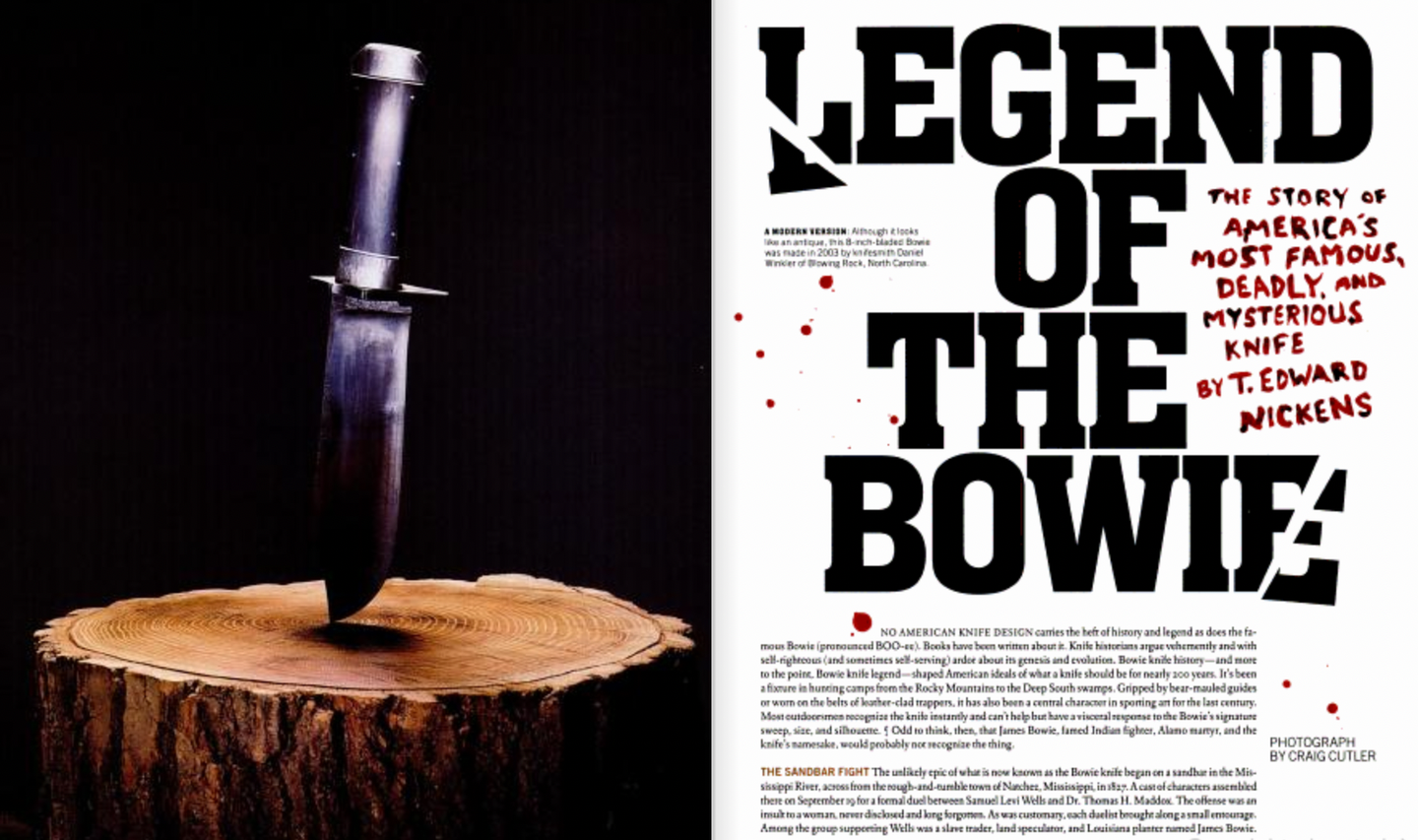 "Legend of the Bowie" was first published in February 2004. Field & Stream
SHARE

No American knife design carries the heft of history and legend as does the famous Bowie (pronounced BOO-ee). Books have been written about it. Knife historians argue vehemently and with self-righteous (and sometimes self-serving) ardor about its genesis and evolution. Bowie knife history—and more to the point, Bowie knife legend—shaped American ideals of what a knife should be for nearly 200 years. It’s been a fixture in hunting camps from the Rocky Mountains to the Deep South swamps. Gripped by bear-mauled guides or worn on the belts of leather-clad trappers, it has also been a central character in sporting art for the last century. Most outdoorsmen recognize the knife instantly and can’t help but have a visceral response to the Bowie’s signature sweep, size, and silhouette. ç Odd to think, then, that James Bowie, famed Indian fighter, Alamo martyr, and the knife’s namesake, would probably not recognize the thing.

The unlikely epic of what is now known as the Bowie knife began on a sandbar in the Mississippi River, across from the rough-and-tumble town of Natchez, Mississippi, in 1827. A cast of characters assembled there on September 19 for a formal duel between Samuel Levi Wells and Dr. Thomas H. Maddox. The offense was an insult to a woman, never disclosed and long forgotten. As was customary, each duelist brought along a small entourage. Among the group supporting Wells was a slave trader, land speculator, and Louisiana planter named James Bowie.

Maddox and Wells stood eight paces apart, left side facing left side. They fired twice, missed both times, and shook hands. As they were leaving the dueling grounds, however, their companions decided it was a fine time to settle a few old scores. A grisly melee ensued. As the original duelists watched, one man fired at Bowie. Bowie drew a large knife and took chase, during which he was shot through the chest. In the next few moments, Bowie was clubbed with a pistol and shot twice more. While he was down, two assailants attacked with sword canes. Bowie slashed one in the gut. The other man stabbed him through the hand and body. Still impaled, Bowie grabbed his opponent’s coat, lifted himself off the ground, and sunk his blade heart-deep.

At the end of the “horrid outrage,” as one newspaper account billed it, Bowie was bleeding from no less than seven wounds. He wasn’t expected to live. He did, of course, for another nine years, until he perished in the even more confounding mists of the Alamo. But from the Sandbar Fight rose his reputation as a knife-fighting master that grew to mythic proportions, fueled in part by the frontier public’s infatuation with his knife.

From then on Bowie’s every altercation was fodder for the press. Various reports have him engaged in hand-to-hand combat dozens of times. Once, it was reported, he was attacked in Texas by three hired assassins. With his terrible blade he decapitated one, disemboweled the second, and split to the shoulders the skull of the third. American men clamored for a knife like Bowie’s,” and Bowie knives were worn by soldiers, buffalo hunters, senators, and governors.

A Life of Its Own

More than a dozen makers of the original Sandbar Fight Bowie knife have been fingered, from a New Orleans knifesmith known only as “Pedro” to Bowie’s older brother, Rezin. Among the most likely candidates is a trio of blacksmiths: Love or Lovell Snowden, Jesse Clifft, and James Black.

“Nobody knows who the hell made it and what it looked like,” asserts James L. Batson, past president of the American Bladesmith Society and author of James Bowie and the Sandbar Fight. At the time it was described variously as a “large butcher knife” and a peculiar shaped and formidable knife.” Whatever its original shape, within a few years the so-called Bowie knife assumed some of its more contemporary characteristics: the coffin-shaped handle, the heavy cross guard, the sweeping clip blade with its partially sharpened top edge.

There is no question that the knives were deadly. Across the young country, according to one breathless account, “Bowies were drinking blood from New Orleans to Dubuque and from Savannah to Brazos.” In 1837 the Arkansas Speaker of the House killed a fellow legislator with a Bowie on the floor of the Arkansas House of Representatives. That same year Alabama passed a law stipulating that anyone who killed another person with a Bowie knife “shall suffer the same as if the killing had been by malice and aforethought.” In 1828 Tennessee banned their sale.

By the mid-19th century the cutlery industry of Sheffield, England, where some 30 shops turned out mass-produced knives and other metal goods, was flooding American ports with various incarnations of the Bowie knife. Some were very good. Others were as weak of steel as they were true to the Bowie lineage. Some Bowies sprouted a brass ridge along the back of the blade, supposedly positioned to snag the edge of an opponent’s knife. During the Civil War, many Bowies grew to the size of small swords.

One of the best-known Bowie knives today is the Musso Bowie, owned by Bowie knife collector and film industry artist Joseph Musso. It’s a frightful knife with a nearly 14-inch-long blade that some believe to have been James Bowie’s personal knife. But most serious Bowie knife students, says Mark Zalesky, editor of Knife World, look to a much more subdued knife as “an early example of the intermediary steps between whatever was used at the Sandbar Fight and later forms.” The Searles/Fowler Bowie has long been displayed at the Alamo. This straight-backed knife sports a checked ebony handle and a tiny cross guard and was given as a gift by Bowie’s older brother Rezin in the late 1830s, and so bears the stamp of Bowie family approval.

Other knife historians hold that perhaps the truest “Bowie knife” extant—meaning an early knife with a defensible connection to James Bowie himself—is Bowie No. 1, an exquisite work owned by and exhibited at the Historic Arkansas Museum in Little Rock. It’s an awesome piece of steel, nearly 183/8 inches long, manufactured with a coffin-shaped handle wrapped in silver and lacking the signature guard that would define the later Bowie aesthetic.

By most accounts the knife was made by James Black, a Washington, Arkansas, blacksmith whom The Washington Telegraph blamed in 1841 for “inventing this far famed deadly instrument,” according to a recent article in Knife World. Engraved on the knife’s escutcheon plate is the phrase “Bowie No.1,” and while it is known that James Black didn’t mark his knives, some historians figure this one was so important that Black or a later engraver marked it as such.

But like all the other original” Bowies, no one knows for certain if this is a knife designed by the hand of Bowie himself, or if that hand ever held it. All anyone will agree on is that the Bowie knife, whatever it was, became a symbol of the frontier’s brashness and bravado and that 176 years after the legendary fight that birthed it, the Bowie knife seems destined to start more arguments than it settles.