When a dozen elk broke through the ice of Washington's Kettle River, 20 people worked for hours on the day before Christmas to save six of the animals 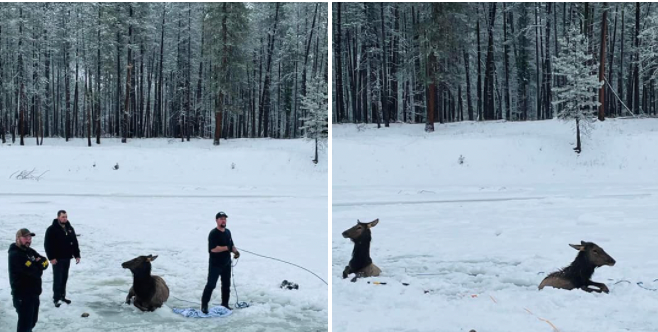 When Jeff Stuart  and Jordan Fish discovered a dozen elk trapped in Washington’s iced-over Kettle River the morning of Christmas Eve, they were advised by authorities to “let Nature take its course.” Bu the men had already swung into action to save the six cows and six calves that had apparently broken through the ice.

According to a Facebook post by Stuart’s wife Ryle, the men used ropes and kayaks to reach the stranded animals and begin to laboriously pull them to shore. In the meantime, Rylee Stuart called the state patrol, then Washington Fish & Game, asking for help. While a warden from F&G arrived some time later, other citizens had also pitched in to help the desperate animals. No less than 20 people, including several children, worked for hours on the rescue.

Rylee Stuart surmised that the elk had fallen through the ice during the night, as one calf had already drowned when the herd was discovered, and several animals had cuts from the ice. After several elk were brought to shore manually, a concerned citizen appeared with a vehicle equipped with a winch. While this eased some of the physical effort of removing elk from the water, rescuers still had their hands full, administering CPR to animals, building fires to warm them, even wrapping them in blankets.

Six elk (four cows and two calves) pulled from the water survived the ordeal, while four calves and a pair of cows did not. Permits to keep the dead elk were issued to rescuers so the meat could be salvaged.

While obviously not part of their Christmas Eve plans, Rylee Stuart told KXLY TV in Spokane “I would do it again in a heartbeat.”