The Perfect Way to Squeeze a Rifle Trigger

Learn the right way to trip a trigger, especially when it really counts 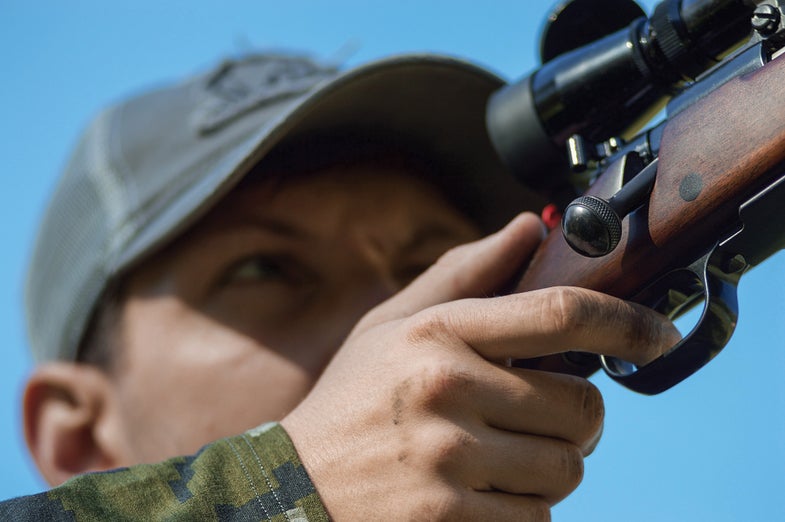 Under Pressure: Breathe in, then out slowly, and gently pull straight back.. Dave Hurteau
SHARE

We picked up the eland’s track at dawn and followed in single file behind Buti, our Namibian tracker, who somehow sorted the bull’s print from the thousands of others pressed into the blazing Kalahari sand. The track had wended roughly 10 kilometers when, around 11 a.m., I caught the bull’s silhouette in the shade of a camel thorn tree 200 yards out. I slammed my rifle into the V of the shooting sticks and found the bull in the scope. Afraid he’d bolt and assuming I couldn’t miss such a huge target, I mashed the trigger—and whiffed.

I had proved, the hard way, that while executing a proper trigger pull is not terribly difficult, doing it when everything is on the line is. No matter how much you’ve practiced, no matter what experts you’ve learned from or snipers you’ve trained with, that 1⁄4-inch movement that frees the firing pin can be devilishly tricky.

So what’s the problem? It’s just pulling a stupid lever, right? The problem is that even a slight amount of pressure or movement in any direction other than straight backward can cause you to miss. What’s more, unwanted pressure can come not only from the trigger finger, but from any of the other digits on your trigger hand. So the first key to a good trigger pull is to take the proper grip. When you’re shooting from a rested position, do not wrap your trigger-hand thumb over the stock’s wrist. Instead, rest it along the same side of the receiver as the trigger finger, which helps guard against canting the rifle, and aids in applying even pressure directly backward.

The other part of the grip—your three non-trigger fingers—is important, too, as excessive pressure here can just as easily throw shots. Find a comfortable space on the grip where these fingers can help hold the rifle in position as necessary but exert minimal influence. To make sure they’re relaxed, undulate them on the grip before firing, as if anxious for your martini to arrive. (Don’t drink and shoot!)

Finally, use the last pad—but not the tip—of your index finger to contact the trigger. For righties, this would be about 1⁄8 to 1⁄4 inch left of the digit’s last crease.

Once on target, as long as the sight picture stays the same or improves, apply pressure directly rearward on the trigger. Breathe in, exhale slowly, and squeeze.

Should the shot come as a surprise? The answer is a definite “sort of.” You should command enough trigger control that you are deliberately choosing when to fire, and yet, the exact moment that the gun goes off should come as a sort of micro-surprise, within about a half-second window.

If your rest is perfect and your form superb, you’ll see the crosshair rise and fall with your pulse. You want to time the trigger break within the valley of your pulse and not on it. From the moment you take a breath and start letting it out, you’ve got about eight seconds to shoot before you’ll need to breathe again, so don’t waste any time. Great shooters can settle in, squeeze, and fire within a few seconds, every time.

Mastering the basic mechanics doesn’t take long. The real issue for most people is having the mental game to overcome buck fever, performance anxiety, fear of recoil, and everything else associated with the heat of the moment—and still exe­cute a smooth, rearward motion of the finger. Practice doesn’t guarantee against yanking the trigger, but doing something correctly so many times that it can be performed almost automatically, even under crushing pressure, helps enormously. You can practice any time for nothing by dry-firing.

Simply getting some critters under your belt helps, too. You don’t ever want to stop being excited on the hunt, but if you can stop freaking out, that’ll go a long way. Some shooters also like to drill into their heads a short mental mantra, like Squeeze and follow through to help them focus at the crucial moment. I admit that I’ve forgotten to squeeze and follow through once or twice. But now there’s an eland in ­Namibia that helps remind me.