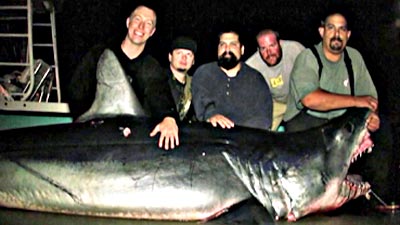 Sean Gizatullin (far left) could not have asked for a more thrilling introduction to shark fishing: During his long-awaited first attempt at the sport on July 24, the 27-year-old Newbury Park man hooked this 1,098-pound Shortfin Mako off the Southern California coast in a tournament sponsored by the Pacific Corinthian Yacht Club of Channel Islands Harbor. Find out why the fish thought to be the largest ever caught in California did not win the tournament.
SHARE
Fishing
Saltwater Fishing