Recent Record Catches in the News

Though the possible record largemouth bass caught in Japan may be talk of the fishing world right now, there have... 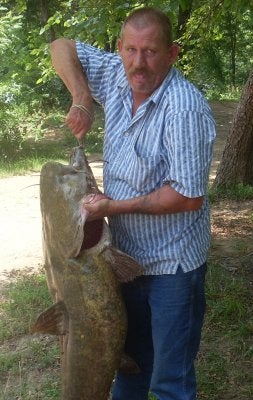 "Catfish Gives Fisherman a Record Story to Tell" - Photo 1 of 2 Tommy Couch, Howe, Okla.
Oklahoma Rod-and-Reel State Record Flathead Catfish
Weight: 76 lb. • Length: 51 1/2" • Girth: 58 1/4" The Lowdown: Couch met up with a few buddies below the dam on Wister Lake in Wister, Okla., on the morning of June 13. He caught a 10-inch blue catfish, then tossed his line into a deep hole a few feet from the bank, and about 10 minutes later the monster bit. About 100 people witnessed the 45-minute fight, Couch said. The angler didn't have to pull the record fish into the boat alone: His friend's Yorkie-Schnauzer pulled on the fish's fin right out of the water to help. Bait Used: Red worm Previous Record: 72 pounds, 8 ounces Quotable: "It's a big ol' booger. He came up and look like a big ol' shark." -- Couch Full Story.
SHARE

Though the possible record largemouth bass caught in Japan may be talk of the fishing world right now, there have been some other impressive catches in the last few weeks that will turn some heads, too. Gleaned from news sources around the globe, here are the photos of the these record contenders.