If you can handle the winter weather and want to test your might against a blue catfish of epic proportions... 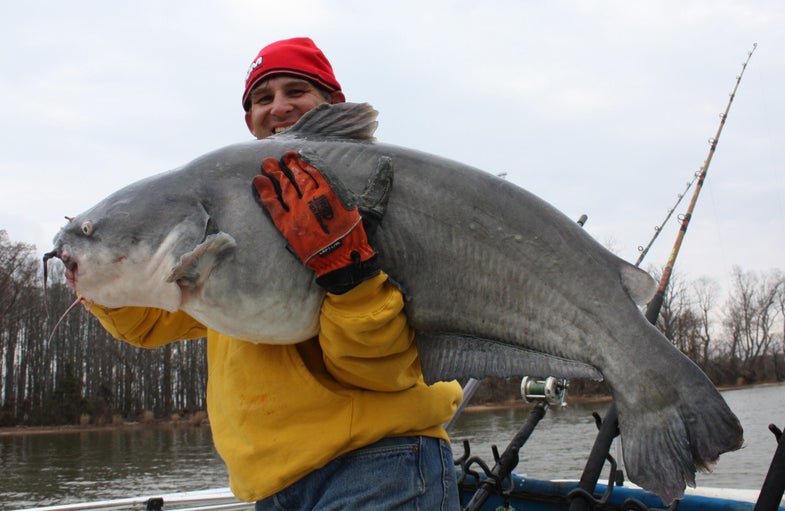 MOST BULGING BELLIES are anything but pretty, except in the world of blue catfish, where obesity is beautiful. I know first-hand from a recent day on Virginia's James River, which may be the hottest river in the country for trophy blue cats. Non-native blues have been in this big tidal flow since 1971, but they didn't start drawing attention until the mid 90s, when bigger fish started showing up on anglers' hooks. Full-time Guide Chris Eberwien began fishing the river in the early 90s, just ahead of the popularity surge. "When you'd catch a 35-pounder at that time, it was a really big deal," Eberwien said. For comparison, our five biggest fish during my recent trip to the river totaled 244 pounds. Eberwien seemed pleased, but even that catch wasn't anything special, though our biggest cat weighed 61 pounds. "I can't seem to break the 83-pound mark," Eberwien lamented. He's had four that heavy in his boat during his career. Seems like it's only a matter of time, though, before he bests his own mark, maybe with a new state record, or even a century-mark fish. Eberwien didn't make bold promises when he asked the size of my biggest cat --about 40 pounds--but I'm confident he knew that I'd catch one bigger. It didn't take long; I broke my personal best about 10:30 that morning, when I caught a 44-pounder. And that was before we found the big ones. Jeff Samsel
SHARE

If you can handle the winter weather and want to test your might against a blue catfish of epic proportions on Viriginia’s James River, visit guide Chris Eberwien’s website, or call (804) 449-6134.

And to get another take on this fishery, check out Bill Heavey’s story, “Catfish Central.”