Click here for information on gun appraisals, and to purchase a copy of S.P. Fjestad’s Blue Book of Gun Values. 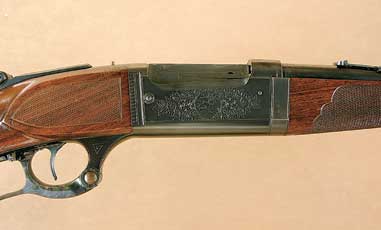 During the 19th century and well into the 20th, most major American gunmakers featured high-grade firearms in their catalogs. Shooters who had the money and yearned for something much nicer than what their friends could afford would thumb through and choose among half a dozen or more fancy and ultra-fancy offerings. (Parker, for example, offered nine ascending grades.) Savage was no exception, and the 1899 Leader Model is a prime example of the kind of gun that highly skilled workers could produce. This is a takedown lever action in .303 Savage (a highly popular cartridge of the day that is roughly equiva-lent to the .303 British). It was made in 1912 and bears the serial number 1211XX. The rifle barrel is 24 inches long and the optional .410 smoothbore barrel is 22 inches. -The special-order features that were available include Sav-age's Grade B engraving, deluxe walnut and special checkering for the pistol-grip stock and the fore-end, both open and aperture rear tang sights, a takedown action, and a fitted luggage case. Today, some rotary-magazine Savages that sold for $100 when new are bringing 10 times that. But this rare and beautiful gun puts them to shame. In 1912, the 1899 Leader Model sold for $81.95 (a plain Jane Model 1899 would have cost about $20). This particular firearm pictured above is in NRA Excellent condition and is presently valued at about $7,500 to $8,000. -David E. Petzal; appraisal by gun expert S.P. Fjestad. Field & Stream Online Editors
SHARE

Click here for information on gun appraisals, and to purchase a copy of S.P. Fjestad’s Blue Book of Gun Values.