The Tactical Side of Things From SHOT Show 2011 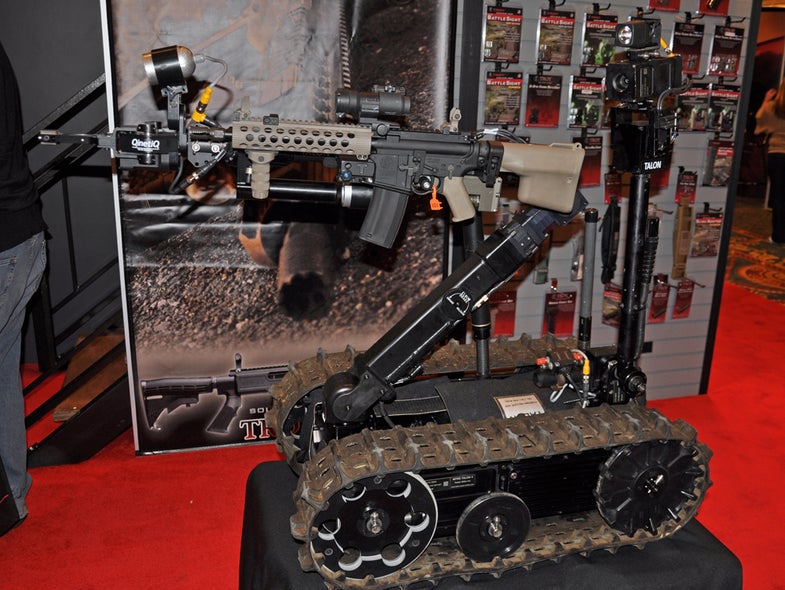 Foster-Miller TALON Robot In front of the Troy Industries booth was this armed, tank-treaded robot. It's actually a Foster-Miller TALON robot--a combat monster that can travel through sand, water and snow up to 100 feet deep and even climb stairs. This puppy is obviously packing heat, sporting a mounted, tricked-out AR-style rifle, and is one of the company's new SWORDS, or Special Weapons Observation Reconnaissance Detection System, designed for the U.S. Army. They cost about a ¼ of a million bucks (take a breath) and can additionally accommodate the SAW M249, M240 machine gun, M82 Barrett .50 cal rifle, a six-barreled 40mm grenade launcher or a quad 66mm M202A1 FLASH incendiary weapon. The robot is controlled by a soldier from a small console. With that kind of payload versatility and a trained soldier behind the wheel, we may soon see these SWORDS, or machines like them, patrolling dangerous urban combat zones putting metal at risk, rather than flesh. Foster-Miller.qinetiq-na.com.
SHARE
Shooting Gear
Gear
Pistols
revolvers
SHOT Show
suppressors