Bear Wars: Rare Photos of a Mamma Grizzly Battling a Huge Male to Protect Her Cub

Nature photographer Jim Abernethy was on a two-week trip documenting the grizzly bears of Alaska’s Katmai National Park and Preserve... 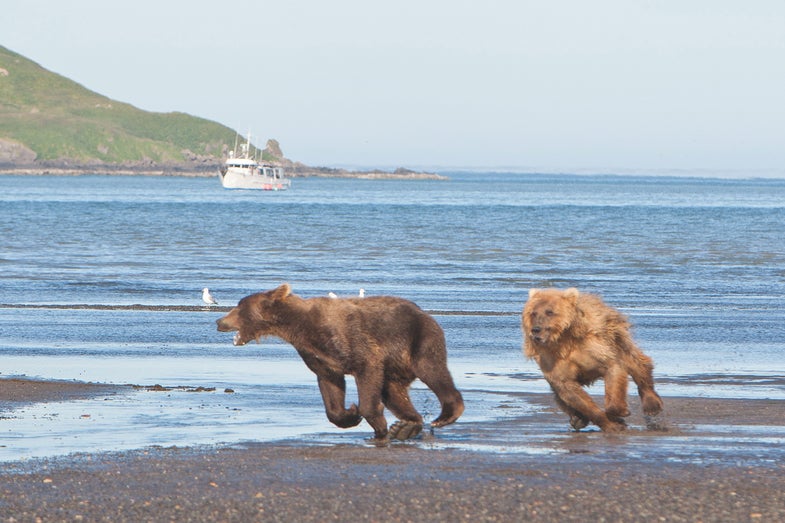 With the female still in hot pursuit, Secretariat headed for home. "He didn't even stay to fish. He got out of there as quick as he could. I think he probably had to watch his back the rest of the day. There's a lesson there! It shows you the power of females." The male had galloped within 8 feet of Abernethy on his way toward the water in pursuit of the cub; now he passed that close again as he fled the mama grizzly. Abernethy shoots a Canon Mark III, which he and his fellow photographers call "the fire-breathing dragon" because it sounds like an automatic weapon when the shutter trips at 10 frames a second. "When he got really close I said, 'I'm locked and loaded,' and I fired off about 3,000 [frames] at him like the camera was a machine gun. The scientists kept saying don't get emotionally involved, but it was a relief for me, like I was gonna take this guy out. It was comical.".
SHARE

Nature photographer Jim Abernethy was on a two-week trip documenting the grizzly bears of Alaska’s Katmai National Park and Preserve in August 2007 when he caught on camera a violent encounter rarely witnessed by man: a mama grizzly facing off against a much larger male grizzly in a desperate bid to protect her cubs from attack.