How to Make a Spear in a Survival Situation

Step-by-step instruction on how to make a spear 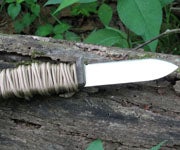 The spear has kept humans alive on the earth for thousands of years, and I believe it remains an important tool for the modern woodsman, but probably not for the reasons many would think.

In most scenarios a knife is the single most important tool you can have in a wilderness environment. In the hands of a skilled practitioner it yields shelter, water, fire, food and many other vital elements that keep you alive. Breaking or damaging your knife can be a mistake that costs your life.

So I say this as a word of caution because attaching your only knife to the end of a stick and then swinging it around aimlessly is a recipe for ruining it. This technique for how to make a spear is not intended for hunting, and most definitely not for spear fishing.

You should ONLY think of this method for how to make a spear as a last resort defensive weapon for protection against big predators that can truly inflict harm. Even at that, I would argue that the greatest value it provides is actually psychological. Bedding down alone at night in the wilderness can be a nerve-wrecking affair. Having a spear at your side may be the one thing that gives you enough emotional comfort to fall asleep… and sleep in a survival situation has immeasurable value.

The first thing you will need is a tree that is roughly an inch and a half thick at the top, and as long as you are comfortable handling. Always use a standing dead tree. If you must use a green tree, take it from a grove where it is competing with others for the same sunlight.

Now baton around the base of the tree until it falls over. A couple of well placed taps with your knife and baton will take out large chips. This process should go pretty quickly.

With the tree free from the ground, first baton halfway through the diameter of the sapling.

Then, hold the sapling upright with its base rooted firmly against a large stump, and remove a series of long chips until you have a nice clean shelf.

The finished product should fit the handle of your knife perfectly. The purpose of this shelf is to provide support to the knife for the thrusting maneuvers.

Tie a length of cordage to a tree and walk away until the line is taught.

When you get to the end of the line, begin wrapping the cordage around the shaft of your spear while leaning back with your full body weight. This creates an extremely tight wrap and prevents the wood from splitting under pressure.

Continue this wrapping all the way up to the hilt of the knife and then all the way back down again, finishing it with a few half hitches. Secure any extra cordage around the shaft of the sapling for future utility.