An Expert Guide to the Latest Techniques in Bass Fishing 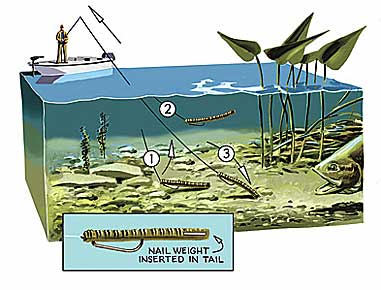 Work a Worm in Reverse
Instead of a standard Texas-rig worm presentation, Florida pro Terry Scroggins takes a 4¿¿-inch french fry (stick worm) and inserts a 1/32-ounce nail weight, the kind normally used with soft jerkbaits, in its tail. He then rigs the worm on an offset hook, casts around likely cover, lets it settle to the bottom, and retrieves with light twitches of the rod tip. "When you pop the worm off the bottom and drop it, the nail in the tail actually makes the bait move away from you as it glides back down, much the way a live crayfish backs up when it's frightened,-¿ he says. "I can tell from the way they slam it that bass haven't seen this presentation in a soft bait before.-¿. Field & Stream Online Editors
SHARE
Bass Fishing
Freshwater Fishing