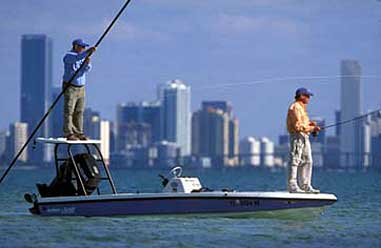 Fishing in some cities is a major deal, a vibrant and vital part of the local culture. Good water, big fish, and lots of them all factor into making this happen, but there's much more to it than that. In a great fishing city, you'll find trucks trailering boats through rush-hour traffic whenever the fish are running. You'll bump into anglers riding in buses or cabs to their favorite fishing spots. You'll see folks catching fish within the city limits and close by. And, in a real fishing city, you'll find good old-fashioned tackle and fly shops, and colorful, working guides who will be happy to book you for a trip right now. Fishing pervades the lifeblood of the urban scene. If you're a serious fisherman, ask three questions when you're rating a city: If you could switch jobs, would you consider moving there, to increase your fishing options? Would you plan a visit there, specifically to fish? Or, at the least, would you throw a rod and reel into your luggage before a business trip, in case you happened to find a little free time? The following cities kick bass, and walleyes, tarpon, and other species, too. We've rated them from 1 to 20, and given you the keys to the top 5. See if you agree with us. Jim Levison
SHARE

The Best of the Rest:

(6) Grand Rapids, Michigan:
You’re never far from fishable water in western Michigan. Grand Rapids is the hub city, where you can hook steelhead running up the Grand River in the middle of town by the Sixth Street Bridge. The city’s population shrinks on the last Saturday of April, when many head north for the trout opener.

(7) Denver, Colorado:
It’s the gateway to the Rockies and trout fishing, but don’t overlook warmwater species such as bass, walleyes, and pike in the reservoirs.

(8) New York, N.Y.:
You can chase striped bass and bluefish on the east end of Long Island, or within a double-haul of JFK airport in Jamaica Bay; fish for bass on the city’s reservoir system (get a DEP permit); or head up to the Catskills for trout fishing on the Beaverkill or Delaware River.

(9) Austin, Texas:
Bass fishing on crystal-clear limestone creeks is the big draw in the Hill Country. You can also find largemouths in Lake Austin, near downtown; and in LBJ Reservoir, northwest of the city.

(10) Anchorage, Alaska:
This is the staging point for most good things in Alaska. Before you jump into a bush plane, try fishing Ship Creek in town for salmon. Willow Creek, an hour away, holds huge rainbow trout, and the nearby Russian River is legendary for its sockeye salmon runs.

(11) Boston:
Obviously steeped in tradition, especially on the saltwater side. And freshwater fishing is taking off again … we’re paying attention, particularly to the EPA goal of making the Charles River and its tributaries “swimmable and fishable.” Though many strides have been made, we’re watching the situation, and think Boston is on the verge of cracking the list, the next time we do the story.

(12) Detroit:
Another fishing mecca. Lake St. Clair is awesome, and the culture here is alive and vibrant. Could do more to promote the destination appeal …

(13) San Francisco:
Love the Delta, and all it’s worth. Offshore, inshore, and of course, a short drive from some of the most technically challenging and storied trout and steelheaed rivers in the U.S. Couldn’t get over the Mark Twain, coldest winter I ever spent was a summer in San Francisco …

(14) Jacksonville, Florida:
Inshore and offshore, rock solid fishing. The St. John’s River is a vibrant and abundant resource. We gave the nod to the larger city down the coast.

(16) Milwaukee, Wisconsin:
Admittedly, many state record species have been caught right out of Milwaukee. It’s the epicenter of Lake Michigan fishing, Chicago not withstanding. And Badgers fish. Period. Tough call to give the nod to the neighbors in Minnesota …

(17) St. Louis:
We certainly understand and appreciate the Mississippi River fishery, and even more important, we understand the lure of the ample warmwater fishing hotspots around St. Louis.

(18) Buffalo, New York:
Lake-run fish and abundant local streams and lakes. But we couldn’t block out the “combat fishing” element, when the salmon or steelhead run.

(20) Portland, Oregon:
We know all about the local steelhead fishing, the bass, and otherwise. Portland rocks, but in the big city context, we gave the nod to its neighbor to the north.