How To Fake an Early-Season Scrape 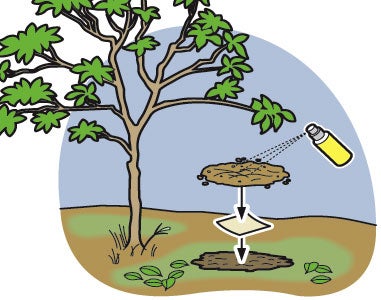 Start a Turf War
Make mock scrapes to lure early-season bucks
By Scott Bestul Scrapes are often compared to calling cards and singles bars, but veteran Iowa hunter and deer scent manufacturer Sam Collora believes a more accurate comparison is a truck tire. "Drive into any farmyard, and the first male dog that runs up will lift his leg on your tire,-¿ he says. "At the next place, another one will sniff the work of the first and leave his mark, and so on.-¿ Collora's analogy highlights two important points about scrapes. First, males are primarily the ones that create them. Second, the scent-making behavior is not limited to the breeding season. "Most hunters view scrapes as rut sign, but bucks use them all year long,-¿ he says. "That's why I start making scrapes weeks before the season, usually in August. My goal is to start a pissing match-¿--literally--"that will attract every buck in the neighborhood.-¿ Location is everything when it comes to an effective mock scrape, Collora says. "If I'm hunting familiar territory, I focus on areas where there's been good scrape activity in the past. On new ground, I look for logging roads, corners of cover, travel corridors, or other funnels. Then I search for a good stand tree and a spot to mark up within easy shooting distance.-¿ Once Collora has scouted several promising locations, he returns later to make his scrapes. "I wear rubber boots and gloves to stay as scent-free as possible,-¿ he says. "I also do it during midday, when bucks are bedded.-¿ Collora will revisit his handiwork about once a week. "The best ones will actually be taken over by bucks. I add urine only to ensure they stay fresh,-¿ he says. "The thing to remember is that as soon as these bucks get into hard antler, they're cruising, checking each other out, claiming their turf. When they start that behavior, they're highly killable over a mock scrape.-¿ How To Fake a Scrape
Collora makes a piping-hot mock scrape using a hand trowel, buck urine, 1-foot squares of waxed paper, and a machete or handsaw. Here's his recipe: (1) using the trowel, dig up an 18-inch oval patch of dirt beneath a tree branch hanging 5 to 7 feet above the ground. (Where no such branch is present, cut one from another tree and fasten it to yours using rope or nails.) (2) Scrape the dirt off to the sides until you've made a shallow bowl, then lay the waxed paper in the center and cover it back up with the dirt. This prevents the deer scent from seeping away into the ground. (3) Spray about 1 ounce of buck urine on the dirt. Collora also likes to spritz a little onto the overhanging branch. (4) If you have permission from the landowner, use the machete or saw to score the bark on a nearby tree (or trees) to create a mock rub. This strong visual cue might lure in any bucks that cruise by upwind and miss the odor. Field & Stream Online Editors
SHARE
Big Game Hunting
Deer Hunting
Whitetail Hunting