How To Read Pre-Rut Buck Rubs 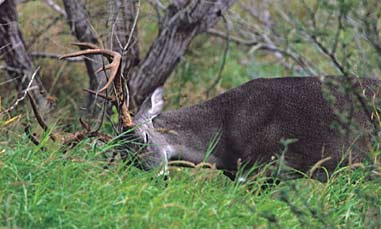 Secret Buck Rubs
Finding sign early in the season MAY mean there's a trophy in your woods
By Keith McCafferty In September, it takes a long, slow walk to find even a few buck rubs in one of my favorite whitetail haunts. In November, the same place looks as if it's been ravaged by a platoon of machete-wielding monkeys, with every fifth sapling scraped, tortured, bent, or broken. Although the latter may seem like the more promising sign, it's those few, scattered early rubs that can be the best clues for tracking down a trophy. Rub Rundown
Whitetail bucks make their initial rubs of the season to remove the velvet from their antlers. The behavior typically starts in late August or early September when vegetation is still green and thick. These relatively few rubs are so difficult to find that a lot of hunters don't even bother looking for them. But there are two good reasons to do so. First, in some areas, waiting until the immediate pre-rut to scout for rubs can lead to sensory overload. You may find, as I often have, that there is too much sign for you to decipher the exact travel route of any particular buck. Moreover, if you put off hunting rubs, pressure might already have altered deer movements by the time you get down to serious business. The fewer marked trees of the preseason or early season may actually tell you more about an individual animal, allowing you to set your stand up precisely where it needs to be in order to score. Second, the earliest rubs of the season are typically the work of the biggest deer. Dominant bucks begin rubbing first and continue the activity throughout September, even though it may be another two months before does come into estrus. Deer biologists have found that individual bucks make from 69 to 538 rubs each year, with dominant bucks averaging 300 rubs or more. Smaller males exhibit a slower rise in testosterone levels; they seldom begin the behavior until late in October and also do not make as many rubs. In other words, find a concentration of sign early on, and chances are you've found the haunt of a buck worthy of the wall. Rub Setup
Early rubs are often clustered around the perimeters of feeding areas, where other deer are most likely to read the signposts. You may also find them in numbers around a buck's bedding area. But you shouldn't put your stand too close to either of these spots. Instead, seek out rubs along a travel route connecting the two. Don't expect to find obvious sign every 10 or 20 yards. You're more likely to discover only a rub or two that will nonetheless help identify the trail or funnel that a buck is using. Set up along this travel route, situating your stand closer to the bedding area than to the feeding area (but not too close). This increases the likelihood of your seeing the buck during legal shooting light. Hang it well before the season opens to give deer time to adjust to its presence. Then, during an early bow or muzzleloader season, or even the opening day of regular firearms season, sneak in and tag your trophy. Tosh Brown, toshbrown.com
SHARE
Big Game Hunting
Deer Hunting
Whitetail Hunting