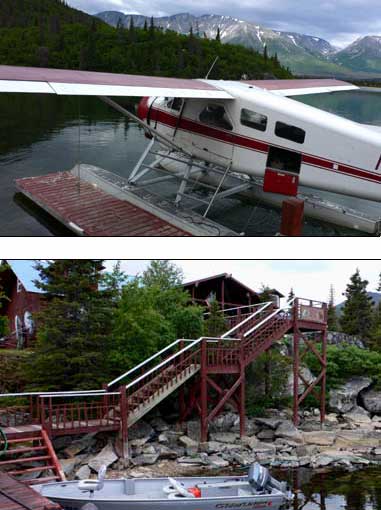 My son, James, and I recently completed an eight-day fishing trip to Alaska. Our plan was to sample the fishing in a number of spots on the Alaska Peninsula, which is renowned not only for its salmon runs (all five species), but for huge rainbow trout (up to 10 pounds), grayling, char, and northern pike. We booked four days at Rainbow Bay Resort (above), in Pedro Bay; and four at Nak Nek River Camps, in King Salmon (more on this lodge later). I made all the flight arrangements way in advance -" United Airlines from New York to Anchorage and back, Lake Clark Air from Anchorage to Pedro Bay; Rainbow Bay floatplane to King Salmon; and Penn Air back to Anchorage. Rainbow Bay Resort (www.rbrlodge.com, 907-850-2234) sits at the north end of huge Lake Iliamna (which is about the same size as Lake Erie). Jerry and Karen Pippen have been running things there for 21 years. The lodge is comfortable and has all the amenities, including Internet service and television (we watched some of the World Cup while we were there). It's also in the middle of great fishing for every species you might want to catch. James and I both caught northern pike, arctic char, rainbow trout, grayling, and king salmon. We didn't have time to do a halibut fly-out, but some of the other guests did, and caught a bunch of the huge flatfish. The lodge also offers brown bear hunting, spring and fall in alternating years. Jay Cassell
SHARE 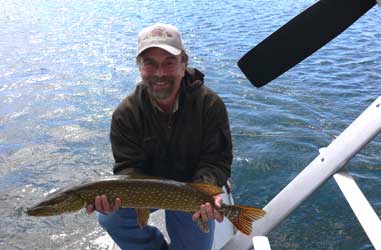 A 45-minute floatplane flight from the lodge took us to a remote lake west of Iliamna that was loaded with northern pike. Using Ugly Stiks, spinning reels loaded with 14-pound test, and colorful stickbaits, we took eight pike apiece in about two hours of fishing. This was my best, a northern pushing 10 pounds. He was lying at the mouth of a small feeder creek, and nailed my stickbait the moment it hit the water. This was fun, non-stop fishing, and we did it all from the pontoons of the floatplane (that black, paddle-looking thing in the upper right of the photo above is part of the plane’s propeller). 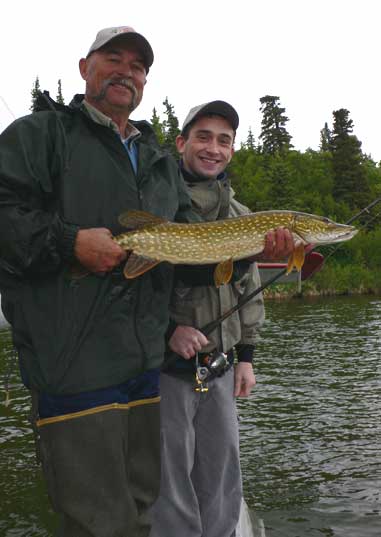 That’s James (right) and Rainbow Bay owner Jerry Pippen with a typical pike. We landed on the lake, then floated into some weedbeds where the pike were stacked up. Once the wind pushed us close to shore, Pippen would hop into the plane, start up the engine, and we’d motor back upwind for another drift. When I asked him what the pike ate, Pippen laughed. “They pretty much just eat each other,-Â¿ he said. “There are some small baitfish in here, but once the pike get big, they just lie in wait for another pike to come along. They’re just eating machines.-Â¿ 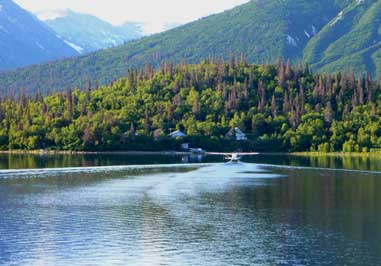 An Alaska taxi-“one of Rainbow Bay’s floatplanes, in this case a DeHavilland Beaver. The lodge also has a Cessna 185. Like many Alaskan lodges, Rainbow Bay is far from any roads, and the only way to get anywhere is by plane or boat. But that’s part of the allure of going to Alaska-“flying around and seeing all the incredible scenery and wildlife. This is the view from the lodge’s dock, looking east over Pedro Bay. By the way, this photo was taken at 11 p.m. Late June and July see 24 hours of daylight. That takes some getting used to, especially when the fish are hitting and you realize it’s getting late. Sleeping was difficult, too, as who can sleep when it’s light out? Eye shades help. 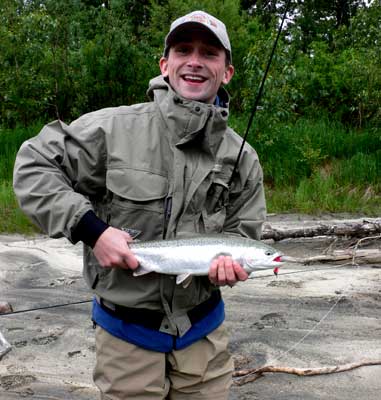 Day 2 at Rainbow Bay meant getting up early, having a quick breakfast, then boating across Iliamna Lake to a tributary stream, where the lodge keeps two jetboats. Along with our guide, Ronnie Meredith, we climbed into one of the boats and proceeded to motor six miles upstream. We stopped once along the way, at a deep bend in the river, and caught a few arctic char. Ronnie told us that the fish didn’t start biting until midday, and he was right. Here’s James with a typical char, one he took on light spinning tackle and a red curly-tail jig. 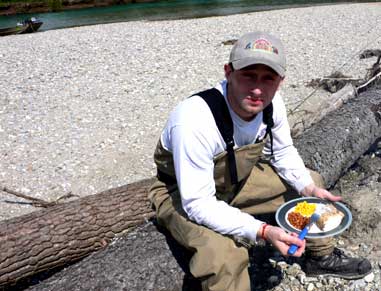 A shore lunch of halibut, beans, and corn, all cooked over an open fire on a gravel bar in the middle of the river, was a special treat. So was the eddy just past the bar, where a school of perhaps 50 char was daisychaining. Every time they came with casting range, we’d launch our lures and inevitably hook one. The action finally slowed as the char got onto us, so we hopped into the boat and headed down river to the next pool. We also caught a few 18- to 20-inch rainbows on this float, which spiced up the fishing. 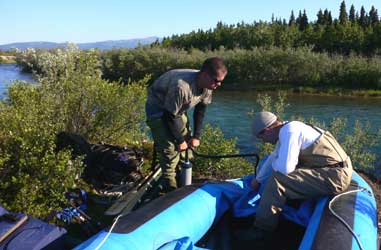 On Day 3, Pippen flew James, Ronnie and me back to the pike lake, where we put on our backpacks–including the inflatable raft–and hiked a mile to a nearby river. That’s James and Ronnie inflating our boat. The mosquitoes here were intense, so the work went quickly and we were soon on the river. 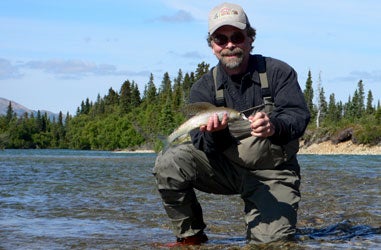 Eight miles of floating put us over grayling constantly. We took most on 5- and 6-weight fly rods and colorful flies. The grayling were huge fun, fighting hard and jumping like crazy. Plus, their dorsal fins are like those of no other fish, with colorful dots and an iridescent glow. 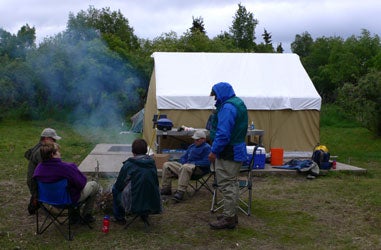 On Day 4, we flew an hour and a half west to the Nushagak River, where the king salmon were just beginning to run. Rainbow Bay leases some riverfront property there, and has a tent camp where lodge guests can overnight and fish two days for salmon. The camp was comfortable, the food was good, and the fire was appreciated — it was in the high 40s and rainy all day. That’s typical Alaska weather, though we generally lucked out and had sunshine for the bulk of our trip. 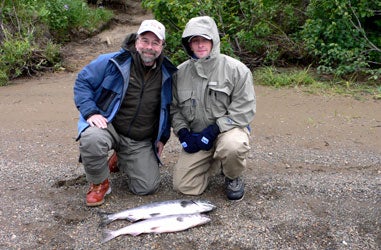 We had a slow day of salmon fishing, with only two keepers. The other guests, fishing out of a second boat, hit a pod that had just come into the river and they nailed them, getting their four-fish limits. One of the fish went 35 pounds, though most were about the size of the ones we caught. They taste best when they’re silver and fresh from the sea, as we discovered when we got home and cooked some fillets on the barbecue. 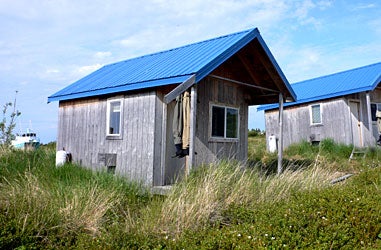 After fishing the Nushagak, we flew on to the town of King Salmon, where we linked up with Jim Johnston, the new owner of Nak Nek River camps. If Rainbow Bay was a five star resort, Nak Nek was a one or a two. But Johnston knows that; it’s part of his plan. “I wanted to open a camp that the average guy can afford,-Â¿ he told us. “We don’t have plush amenities. But if you want to come to Alaska, have a comfortable place to stay, and just fish like crazy, we can make that happen. We’ve gone the extra mile to make Alaska affordable.-Â¿ The camp is in Katmai National Park, right on the Naknek River. That’s our cabin in the center. There was no running water or electricity, but the cabin was comfortable, and it had a great view. 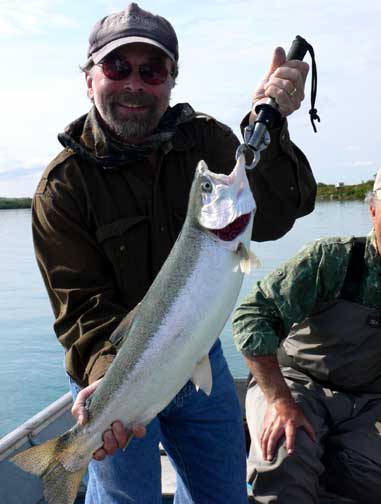 You can’t complain about rainbows like this, can you? This one weighed 8 pounds, and came from the pool right in front of our cabin. The trick was to watch the seagulls diving at baitfish. When the birds came close and the water started to boil, you quickly threw a stickbait into the melee. 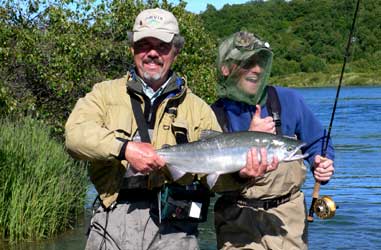 Success! Jim and James with a good sockeye, bright silver and fresh from the sea. James was using a 7-weight fly rod and a reel filled with 2-weight running line — a perfect combination that really lets you feel what the fly is doing. Jim uses a somewhat similar outfit when he guides for steelhead back home on Michigan’s Pere Marquette. 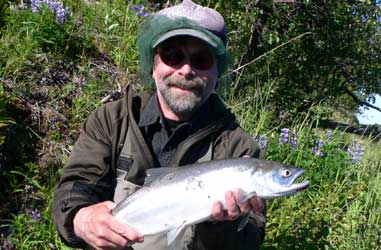 That’s me with my best sockeye of the day. There were some really huge ones going by this spot-” you could see them if you had polarized glasses-“but getting them to hit was another thing, as they don’t feed when they’re on their spawning runs. Mostly, they hit out of instinct or, perhaps, irritation. Once the fish swim past our spot, and past the camp, they make their way up to Naknek Lake, where they spread out to spawn in the various tributaries. One of those tribs is the Brooks, where you can go and watch bears feeding at the falls. We had planned to do that, but the wind on most days was too stiff for us to chance going across the big lake in Jim’s boat. Plus, we were having too much fun fishing where we were. 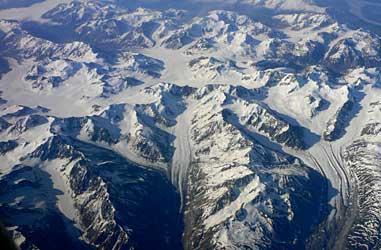 It all has to end sometime. Our stay at Nak Nek River Camps (231-745-4401) over, we flew from King Salmon back to Anchorage and then, eventually, back to New York. Those are the St. Elias Mountains down there, photographed as we flew over British Columbia.
Freshwater Fishing
Salmon & Steelhead Fishing