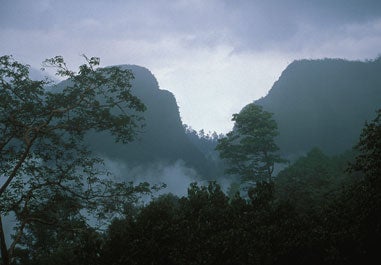 A view of Borneo's Gunung Buda limestone massif, in Gunung Buda National Park. Fly Fishing 3,000 Feet Under The Earth
By: Ralph Cutter, as told to Chris Santella "I was part of an expedition that went to Borneo to explore Gunung Buda, a massive block of jungle-cloaked limestone that rises more than three thousand feet into a ceiling of clouds that drench the area in 300 inches of rain each year. Known by geologists as a karst formation, Buda has been assaulted by hundreds of thousands of years worth of rain that has carved deep fissures into its limestone flanks. From a caver's perspective Gunung Buda may hold the crown jewels of Borneo; and on the global level, Borneo's caves are on a scale unto themselves. As an example: two ranges south of Gunung Buda at Gunung Mulu there is the Sarawak Chamber, a staggering cavern three times larger than the Superdome where a 747 could fly laps between its stalactites. "This expedition was going to be the third try at cracking Buda's secrets. The first was a brief scouting foray by John Lane and George Prest. With a minimum of time and equipment they found tantalizing leads hidden behind the massive piles of rockfall at Buda's northern base. Lane and Prest returned two years later with a team of hard-core cavers and discovered an astounding three dozen world class caves almost immediately. Unfortunately the close quarters, miserable tropical conditions, and driven personalities of the team combined to cause the expedition to implode in less than a month. Despite the social fallout, valuable data was logged and the discoveries set the stage for our expedition. For this expedition, John scoured the world for cavers with specialties outside of the strictly subterranean realm. I joined the team as its paramedic, herpetologist and fish biologist. Ralph Cutter
SHARE
Fly Fishing
record fish