The Seven Best Days to Hunt Deer This Season 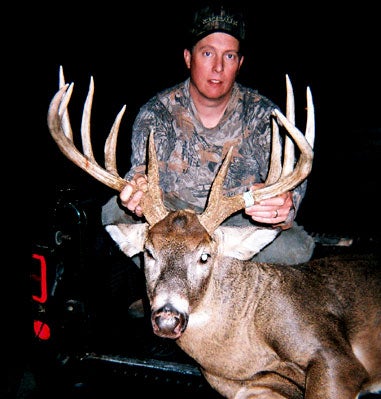 Norm Eggleston of Streator, Illinois shot this 12-point in the late afternoon from 5 yards away with his bow. It scored 156 5/8 (Pope & Young). October 22
The early pre-rut is just beginning. Testosterone levels are building, and bucks are in peak physical form. Five weeks from now, when the rut is over, they'll have lost 30 to 50 pounds from fighting with other bucks, chasing and breeding does, and not taking much time to eat in the process. Once the days start to cool and the new moon appears, bucks move more at dawn and dusk. Though the rut is imminent, mature males mostly stay in the thick, nasty cover in their core home areas. Look for these spots in elevated or swampy locations and then fan out from there, searching for the early rubs-"preferably 3 inches or thicker-"that bucks make as they start to look for older does coming into heat early. Corridors that lead from rugged summer hideouts to gentler doe terrain near cropfields, food plots, abandoned orchards, and oak flats are especially good places to hunt today. Food is still important to bucks at this stage, so keep an eye out for large single sets of tracks and scuffled leaves where deer have foraged for acorns. Nibbled blackberry, greenbrier, honeysuckle, and raspberry bushes along travel corridors also let you know that bucks have started venturing into doe territory. Rut Wrecker: The weather could be stifling hot, which would cause deer to bed down during the day and move after dark, when it's cooler. Either hunt right at dawn and dusk, or wait for the heat to break in a day or two. Field & Stream Online Editors
SHARE
Big Game Hunting
Deer Hunting
Whitetail Hunting
Bucks
Deer
Trophy Bucks
Whitetail Deer Hunting