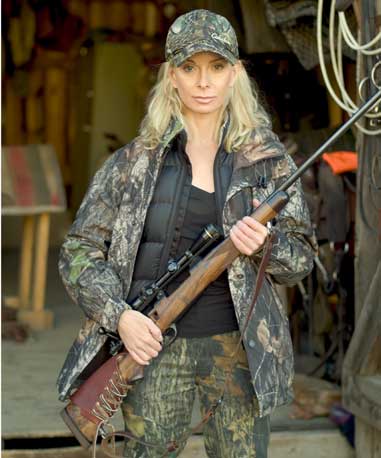 By Susan Casey If you had asked me a year ago, "So, when's the elk hunt?-¿ I would have been certain the question was meant for someone else. Because the two key words in that sentence-"elk and hunt-"meant nothing to me, and when combined spoke of blood and guns, and those were things I didn't spend much time with. I'd seen an elk once, but that encounter took place on Main Street in Banff; it was a tourist-addled nuisance cow looking for handouts of Cheetos and hardly a majestic ambassador of the species. Hunting wasn't part of my upbringing, at least not the type that results in homemade jerky. As for rifles, I'd never held one. But then at a cocktail party last June, hunting entered my life in an unexpected way. It happened during a conversation with Sid Evans, this magazine's editor-in-chief. As the crowd milled around us and the canap¿¿s were passed, I described my new infatuation with spearfishing. Stalking dinner felt surprisingly satisfying, I told Sid, and of course he understood. What was it like to go after something bigger, I asked. Did you have the same primal feeling, but amplified? This idea interested both of us and within minutes the gauntlet went down: Could Field & Stream take a hunting know-nothing, a gun ignoramus-"in other words, someone like me-"and send her on one of the toughest hunts in North America? Specifically: If the correct efforts were made, the appropriate expertise recruited, could a person go from never having laid eyes on a .300 Win. Mag. cartridge to making a 300-yard shot on an elk? In a matter of months? The next morning Sid e-mailed to see whether I was serious or "was that just the beer talking?-¿ Elk hunts are brutal, he cautioned. The Rocky Mountain elk fires on all sensory cylinders-"smell, hearing, vision-"and has an almost eerie knack for staying one step ahead of its pursuers. Elk hang out at high altitudes, in crags and gullies and dark folds of timber, in steep and slippery places where humans fumble around at a disadvantage. Elk hunting would be a commitment. A large one. I would need to learn every nuance of the animal from scratch. The hunt would require peak fitness levels, so that running around at high altitudes was, literally, no sweat. I would need to become a very good shot in a very short time. The magazine would understand if I wasn't up for it, he wrote. "After all, I realize that you haven't killed so much as a squirrel." "I'm in,-¿ I e-mailed back. "How soon can I go?-¿ My enthusiasm came from a mix of curiosity and guilt-"I eat meat but know nothing about what it means to kill for it. I love animals, but I also know that sentimentalizing nature is wrong. Dying, killing, becoming prey-"these things are all part of the game, and to ignore them trivializes life. Bluntly put, the modern relationship to the wild is a fake one. For many, meat is a section at the grocery store. And at Safeway there are no big brown eyes to consider, no blood. Hunting struck me as a more honest approach, and a necessary one if the goal is to understand the true nature of, well, nature. If this seems like an improbably heavy philosophical reason for going on an elk hunt, consider that I was an improbable elk hunter, and on the day I agreed to become one, the improbable stuff was only beginning. John Johnston
SHARE
Big Game Hunting
Elk Hunting
Elk
Elk Hunting Tips
record fish
Shooting