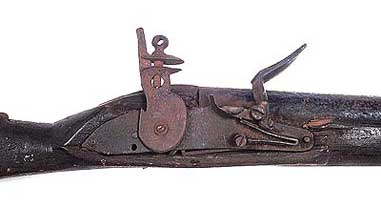 Here's a photo of the real thing. Guns like this flintlock from the late 1800s in the Illinois State Museum in Springfield were among the many tools -- including bait, multi-barreled battery guns, and pump and autloading shotguns with magazine extensions -- with which market hunters devastated waterfowl populations. Market hunting became illegal in 1918, although some outlaws hid their big guns by day and hunted by night into the 1930s. Courtesy of the Illinois State Museum
SHARE
Shotguns