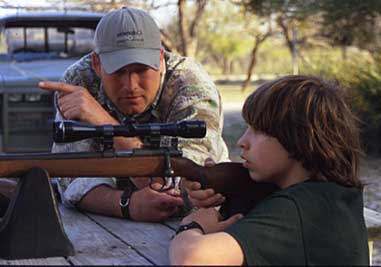 The Safari Club International's Apprentice Hunter Program is a hands-on camp that teaches hunting skills and culminates in an actual rifle hunt for an exotic animal. In early March, my 13-year old son John and I traveled to Indianhead Ranch in Del Rio, Texas for a three-day mini-version of the Apprentice Hunter Camp. Here's John with guide Darren Carr, at the rifle range. Field & Stream Online Editors
SHARE 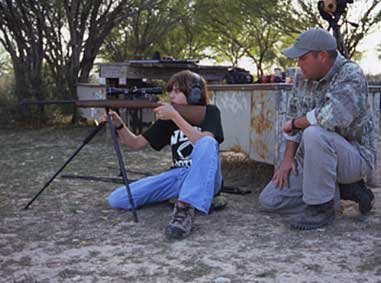 Shooting forms a large part of the curriculum

Shooting forms a large part of the curriculum. Campers have the opportunity to shoot centerfires, muzzleloaders, shotguns, hunting handguns, bows, and .22s, with an emphasis on safety and field shooting skills. Here Carr offers advice as John is taking aim at a row of metallic silhouettes using the shooting sticks he’ll take on his deer hunt. 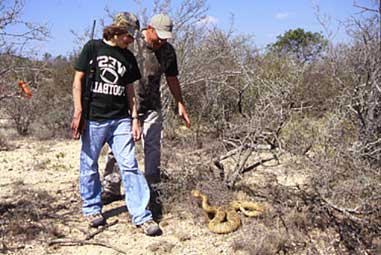 John has a close encounter with a rattlesnake

John has a close encounter with a rattlesnake (stuffed) on the “skills trail”. Campers walk along the trail making shoot-don’t shoot decisions, crossing obstacles, and being aware of hazards in their surroundings -” like poisonous snakes. Kids who attend the weeklong camp also learn camping and survival skills and spend one night putting them to use sleeping under the stars. 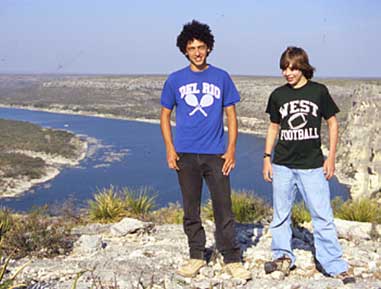 There’s time for sightseeing at Indianhead. Here John and fellow camper Jimi Stitts of Del Rio stand on the cliffs overlooking the Devil’s River, which forms one arm of Lake Amistad. Amistad, an impoundment of the Rio Grande, has become a premier bass fishing destination. 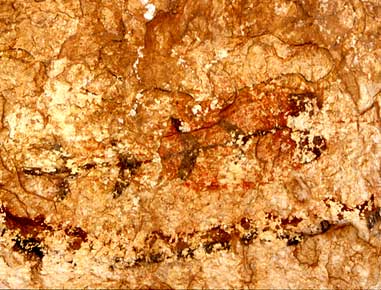 Indianhead’s rugged cliffs have attracted hunters for thousands of years

Indianhead’s rugged cliffs have attracted hunters for thousands of years. We climbed up to see 7,000 year old cave paintings on the property, among them likenesses of deer and catfish. The paint was made out of berries mixed with animal fat that seeped into the porous stone walls and has lasted for centuries. 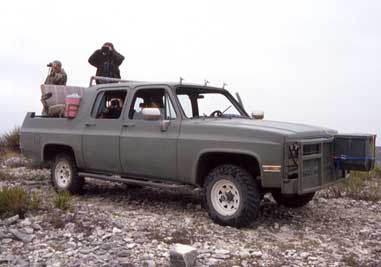 Hunts are spot and stalk

Hunts are spot and stalk, conducted in Texas-style, heavily-modified Road Warrior Suburbans. This one even has a removable windshield for unobstructed glassing.We covered lots of rocky ground looking for deer on the first morning, but the cold, cloudy weather had them holed up. 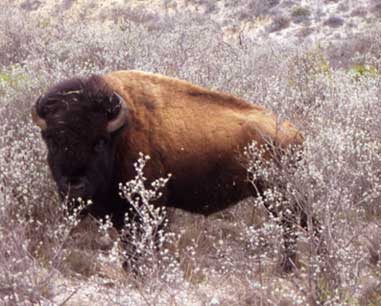 Indianhead has one high fence surrounding 10,000 acres, and its exotic animals are self-sustaining and free to go where they please. You never know what you’ll see next. We saw oryxes, addaxes, blackbucks, fallow deer, axis deer, elk, aoudad and others. John took this picture of a bison who didn’t want to get out of the way of our truck. 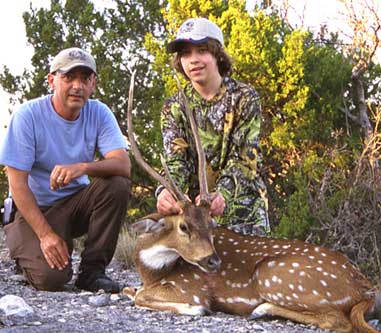 Here’s John with his axis buck.

Here’s John with his axis buck. We had an exciting afternoon hunt, stalking to within 100 yards of a herd, then hiding in a blowdown and waiting for this deer -” a “management buck” — to separate himself from the herd for a clear shot. After a tense 15 minutes he wandered off into the brush and we made a fast stalk after him. Darren set up the sticks for John, who shot the deer at 100 yards across a rocky draw. The buck ran off and might have been lost if it weren’t for . . . . 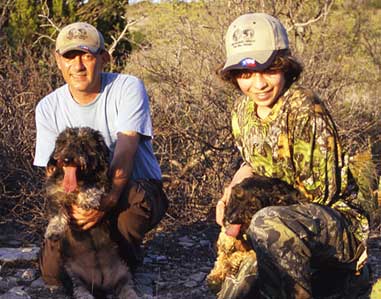 the heroes of the hunt, wirehaired tracking dachshunds Chili and Pepper.

. . . the heroes of the hunt, wirehaired tracking dachshunds Chili and Pepper. Indianhead owner Laurent Delagrange brought his dogs out from the lodge to trail the buck. The dogs found the deer hunkered in the bottom of a cedar-choked ravine and flushed him for the finishing shot. John is holding Chili, Laurent has Pepper, who may be the largest dachshund in the world. 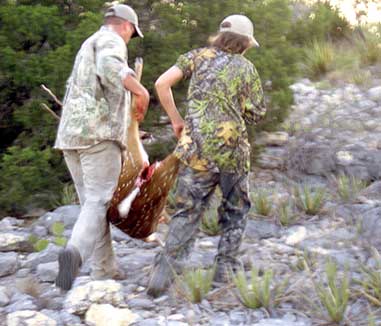 John and Darren haul the deer up to the truck.

John and Darren haul the deer up to the truck. Campers help field dress their kill, learn about caring for the meat, and bring it home with them. You can see this deer isn’t very heavy, but axis meat is the best venison I’ve ever had (and I live in cornfed whitetail country). Wouldn’t you rather your kid came back from summer camp with a bunch of boned venison instead a leatherwork bracelet?
Deer Hunting
Hunting