The Buck of a Lifetime 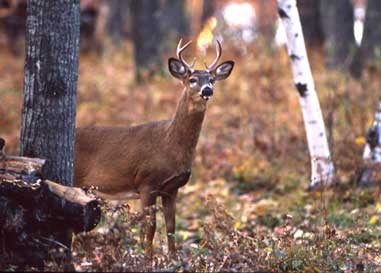 1.5 years old "These shots are all of the same buck, that's what makes them so unique and rare. I made a promise to the caretaker of this private property that I wouldn't disclose the location where these shots were done so I can only tell you they are from the upper midwest. After photographing this buck I became addicted to capturing him on film every fall. This area is one of the most difficult places to make good shots because it is all wooded and the overhead canopy keeps it dark until the leaves fall. Even then it is dark because the oak trees hold their leaves so late into the winter. Compound this problem was the fact that this deer was almost totally nocturnal. He only came out during the daylight during the rut. It made for a nearly impossible task to get him on film. He became my first "obsessesion deer." I spent all my savings just to purchase fast-enough lenses, sturdy-enough tripods, and the best silent cameras. For eight years I spent every fall, during the rut, trying to get usable images of him. I spent so much time at it that my career suffered; business-wise my time would have been spent much more wisely photographing more productive areas. But it was a grueling, satisfying journey. This buck taught me a tremendous amount about whitetail behavior, physiology, biology and social dynamics, so much that in seven seasons I gained a lifetime of knowledge from him. He's my favorite whitetail subject ever, not just for his tremendous antlers but for his brutishly "boss" look. He only had to throw a glance at other bucks to make them back down. He's probably the largest-bodied whitetail I've ever seen. If I've ever seen a 400-pound whitetail, he was it! I only ever saw his rut personality because that was the only time I could ever observe him; I never got a picture of him when he wasn't either with a doe or chasing does. His pattern was to never leave the hot doe alone. As long as I didn't spook her, I could get photos of him, if there was enough light! And there were a lot of photos of him that had to be thrown in the trash because poor light made for an unusable image. How'd he get this big? The property owners made a conscious decision not to harvest him if the chance arose, thank goodness they did because they allowed one of the greatest bucks ever to live to a ripe old age!" --Bill Kinney. Bill Kinney
SHARE
Big Game Hunting
Deer Hunting
Whitetail Hunting