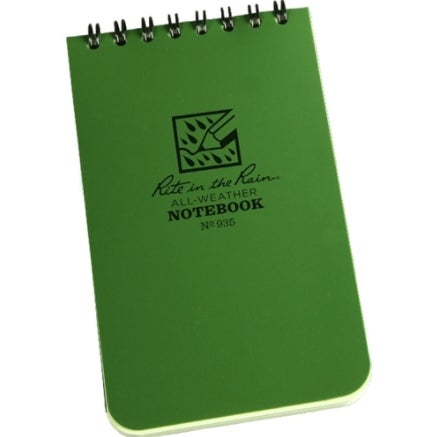 Back in 19 and 73, in January, in Chicago, I stopped in at the Eddie Bauer store to see what I absolutely had to have (the store sold guns at the time; that gives you an idea of how long ago this was) and came out with a Rite in the Rain Pad. In the ensuing 44 years, it’s been to Africa 11 times, Alaska six, New Zealand twice, and everywhere else I’ve hunted. In it, I’ve recorded all sorts of useful information.

The words for “thank you” in Shona are “da tenda.” This is the most useful expression in any language. In Swedish it’s “takk takk.”

I’ve used the pad to make maps, record back azimuths, sketch what the country looked like, note distances, and so on. In 1989, I was hunting on the east end of Anticosti Island with the late Chub Eastman. The east end of Anticosti is one of the easiest places in the world to get lost. Chub, myself, and our guide, who detested both of us, took a three- wheeler to a drop-off point, and on the way the guide managed to upend the vehicle, leaving the three of us pinned under it. That was pretty exciting.

When we got to the drop-off, Our guide left Chub and gave him directions in what might have been Romanian, or Quebecois, or Finnish, explaining that I was going to hunt with him, and Chub would hunt by himself and meet us here at 4:30.

Come 4:30, we were back at the three-wheeler, but no Chub. We looked and looked, but no dice. I fired off all my ammo in the classic three-shot bursts, but Chub never heard it. (We found later that he was a half-mile away. Think about that.) So I tore a page out of my Rite in the Rain book and left Chub a note.

It said: “We’re going back to the lodge, and will come look for you in the morning. Have a nice night, and if you die we will split up your stuff.”

I stuck the page on a tree limb and we went back to the lodge.

The next morning the lodge helicopter went out and found him. So many people got disoriented there that they kept the chopper just to look for lost hunters. Chub had built a shelter and spent a dry if hungry night. Despite the fact that it had rained nonstop since I hung the note, it was still there, perfectly legible.

Rite in the Rain paper has been around since 1916, and is very handy stuff. My chronograph book, which I keep in my range bag, is a RiR looseleaf binder. The fact that it sits in a damp garage all the time doesn’t bother it. In addition to the Eddie Bauer notebook, I have something like half a dozen RiR notebooks in my car, and other places. The Eddie Bauer notebook has only two pages left, and when those are used I don’t know what I shall do.

But there’s more. Rite in the Rain has just come out with a series of sighting-in targets that are waterproof and designed for sighting in at 25 meters. This makes them ideal for checking your rifle on hunting trips, where sighting-in facilities are usually crude or non-existent, and it’s a hell of a lot easier to get the job done at 25 yards, or meters, than it is at 100.

Here’s how you do it: At home, sight in your rifle at 100 yards. Then, go to a 25-yard range and see where the bullets strike on the RiR target. Slip that target under the foam padding in your rifle case, and when you get to camp, tack up the target 25 yards away and shoot. If the bullet goes into the group you printed at home, you’re set. If not, the ramp apes got to your gun and you need to make adjustments. Do not omit the 100-yard element of this process. As it says on the target, “Weapon is not considered zeroed until confirmed at true distance.”

Rite in the Rain also makes very good write-anywhere ballpoint pens, of which I have a bunch because I’m always misplacing them. You can find out about all this at Rainwriter.com.