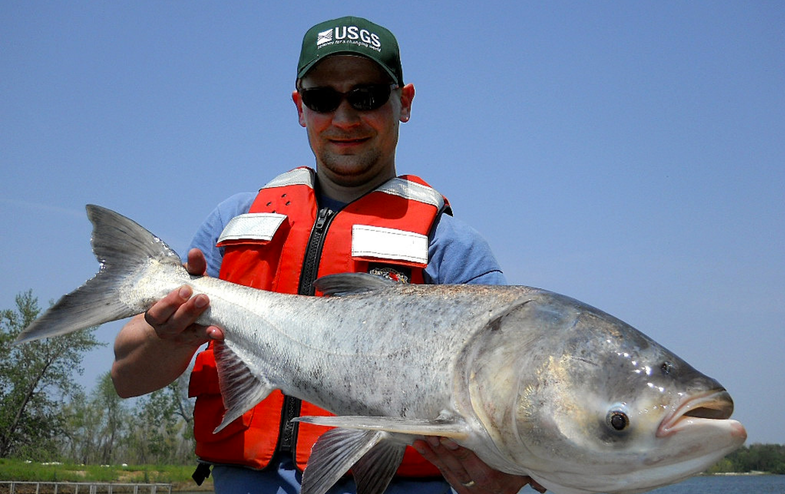 A bighead carp was collected on the Illinois River. USGS
SHARE

President Donald Trump’s proposed budget includes steep cuts to programs designed to keep invasive Asian carp out of and maintain the water quality of the Great Lakes. According to The Columbus Dispatch, the budget would reduce the $300 million annually invested in the Great Lakes Restoration Initiative and eliminate $1 billion in funding for the U.S. Army Corps of Engineers, hampering their efforts to prevent Asian carp from accessing the Great Lakes. The combined cuts could threaten the estimated $7 billion in revenue generated the massive five-lake fishery.   U.S. Representative Bill Huizenga, a Republican from Michigan, criticized the proposed cuts and emphasized the importance of the Great Lakes Restoration Initiative in maintaining the quality of the Great Lakes.

“In an era where federal spending must be prioritized, I believe the GLRI, which has a history of proven results and strong bipartisan support, should continue to be a national priority,” said Huizenga, a co-chair of the House Great Lakes Task Force.    The Great Lakes Restoration Initiative, which began in 2010, is a multi-agency program intended to improve the water quality in Great Lakes and fight the spread of invasive species, including Asian carp. The Asian carp, which can grow up to 100 pounds and eat 20 percent of its body weight a day, can decimate a fishery by devouring the plankton that serve as the base of the food chain in a lake. Representative Dan Kildee, a Democrat from Michigan, criticized the budget risking their introduction into the Great Lakes.

“Such irresponsible cuts to Great Lakes protection efforts will expose our freshwater to major threats, including species like Asian carp and pollution. These are very real threats not only to our environment, but also our economy,” Kildee said. “The Great Lakes generate billions in annual economic activity and support 1.5 million good-paying jobs in the tourism, boating, and fishing industries.”   The U.S. Army Corps of Engineers’ efforts to limit the spread of Asian carp could also be hampered by the proposed budget. The Corps is responsible for maintaining electric barriers in the Chicago Area Waterway System, the only confirmed means of movement for the invasive fish into the Great Lakes. Studies show these barriers, which inhibit upstream movement by generating electric fields, have been a successful means of deterring the spread of Asian carp. Future plans to build another fish barrier at the Brandon Road Lock and Dam in Illinois were put on hold by the Trump administration.