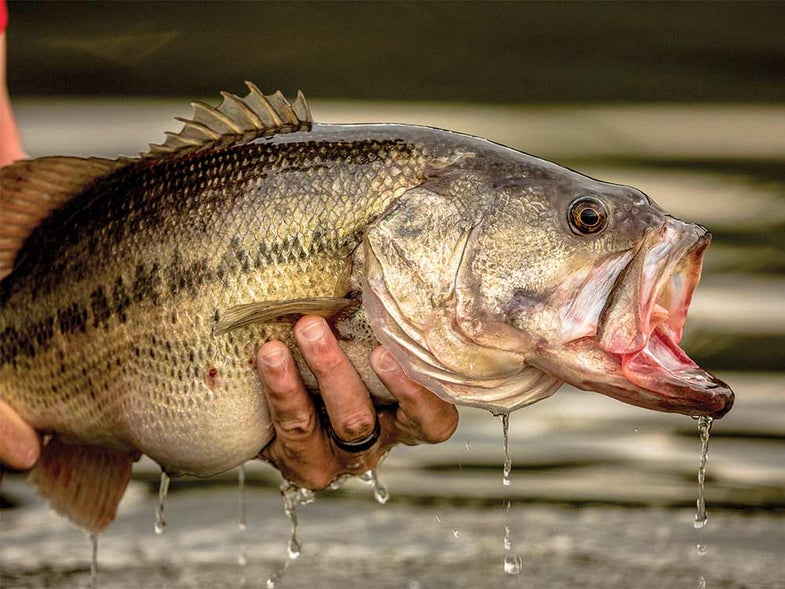 Bottom's Up: Deep cranking is a killer when bass move from shallows to offshore.. Lance Krueger
SHARE

Bass pros spend 200 days or more on the water every year. You don’t. You’ve got a full-time job and a family. That’s why by the time you get on the lake, learning something new is the last thing on your mind—you just want some bites. The problem is that as bass fishing continues to grow in popularity, fish in public waters are getting more educated than ever. It’s no longer possible to tie on a spinnerbait in March and fling it successfully until November. You’ll still get some solid bites many days throwing nothing but your favorite flipping jig, but there will also be days when you’ll scratch. And if you are a fiend for finesse, woe betide you when the bass get buried up under a thick canopy of hydrilla. The key to success these days is being adept at all sorts of specialized tactics, offering up the right tool for the specific situation that confronts you. Nothing hones those skills like time on the water, but if you don’t have tons of it, we talked to four veteran bass pros to get their best hacks for the must-know technical skills that work everywhere. Their advice will put you on the fast track from novice to expert, helping you maximize your precious time on the boat.

When line-shy bass need to be finessed into biting, the drop-shot allows for both vertical and semi-horizontal presentations with extreme subtlety. The weight anchors the rig to the bottom, but the soft plastic sits above it, unencumbered and undulating seductively. If you’re dealing with pressured fish, especially those in ultraclear water, you’d better know how to drop-shot. Sometimes this is the only tactic that will score when the fish are on high alert.

Find the “juice” and prepare to be patient. Pipkens says that he doesn’t expect to cover a lot of water with a drop-shot, not nearly as much as he would with a Carolina rig, and certainly far less than he would with a crankbait. In fact, he most often uses a drop-shot vertically, which allows him to target discrete spots directly under the boat thoroughly and goad neutral or negative fish into biting. By adjusting his leader length—usually anywhere from 8 to 12 inches—he can suspend his bait above bottom-hugging algae or short strands of grass and keep it clean. Trying to keep a shaky head or a finesse jig salad-free while working thick vegetation can be a real chore.

In an era when most “serious” anglers rely almost exclusively on tungsten weights with their drop-shot rigs, Pipkens says he still prefers to lean on lead weights. “Shape matters much more than a weight’s material,” he says. “I’ll use a cylinder weight around brush but a round weight in places with little bits of shell or rock on the bottom. The round weights let me feel the softer sweet spot better.”

Pipkens warns anglers not to shake the lure too aggressively. “Sometimes shaking it is the deal, but people often overdo it,” he says. “I’ve caught more fish doing nothing with a drop-shot than by shaking it.” A straight worm like a Lunkerhunt Core Strength Limit Worm, rigged Texas-style, gets most of his bites. But when bass are keyed on smaller bait, he’ll downsize to a little Lunkerhunt Darter.

°When bass get under a canopy of matted vegetation or in the thick pads, there are few techniques that can effectively get through or over the salad and generate strikes. A weedless hollow-body frog is one of them, and it can represent all sorts of aquatic and terrestrial creatures—not just frogs and toads, but shad, bluegills, and rodents as well. Fail to know how to work a hollow body, and you’ll be useless around the veggies.

Work on casting and rod manipulation. Most of the time, frogging is done in heavy vegetation, but DeFoe says frogs are also deadly under overhanging trees and docks. Learn to skip your faux amphibian way up into those dark spaces and you have a lure that’s capable of avoiding most hangups on unseen obstacles. Even in matted grass, where targets abound, you’ll still want to carefully assess casting angles to make sure that you cross key ambush points like ditches and holes at an angle that’ll force the fish to look up and still allow you to extract it. Random casting scores fewer bites, while target-oriented casting dials in a pattern.

DeFoe relies on three different frogs: the Terminator Walking Frog, the Walking Frog Jr., and the Popping Frog. All three will walk the dog, but the popper also gives him the opportunity to chug and blow a lot of water to call fish from afar, while the Junior offers up the most subtle action and the smallest profile. He says that dialing in the cadence the fish prefer daily or even hourly is critical. In many cases, it’s especially important to make the frogs sashay from side to side without a lot of forward movement. Proper casting and proper walking are easier when you’re not using a rod that’s a broomstick. “If the rod’s too stiff, you can’t load it up to cast it well,” DeFoe says. “You also can’t impart action into the bait with a stiff rod. If you learn to get enough slack in the line, you can make the frog turn around almost back on itself. That drives bass insane.”

°The close-range presentation of jigs and soft plastics allows anglers to make precise and stealthy approaches to shallow fish, generating reaction strikes in any sort of cover—from thick grass, to lily pads, to laydowns, to docks and trash piles. If you can’t flip, you’ll miss the opportunity to get a lure in front of some of the biggest bass in the lake. Period.

°Master the mechanics. If you’re flipping in a tight area, you want to be able to hit the smallest holes and crevices with the least amount of noise and disturbance from the lure hitting the water. Anything other than a silent entry may be a permanent deal killer, especially when targeting spawning or pressured fish. During cold Ohio winters, Shryock would sit in his living room recliner with a shortened flipping stick and a variety of shoes distributed around the room.

“You can’t practice too much,” he says. “Do it until you can put a jig in each shoe without hitting anything or making a ‘splash.’ If your entry is really loud, that’s the difference between a giant and nothing. If I flip to a dock in 2 feet of water and crash the jig, I curse myself every time.”

As with fishing a frog, a proper presentation requires understanding the strike zone. “I see guys make bad choices on where to flip to all the time,” Shryock says. “You want to present the bait to the closest stuff first. You don’t want to bounce it across everything in between you and the target.”

The one exception to his general preference for silence occasionally arises in the thickest possible matted vegetation, the type of cover that takes an ounce or two of tungsten to punch his bait through. “When the cover’s not too thick, I want my bait to just slip in there under the clump so the bass can turn around and get it. But sometimes in the really thick stuff, it’s better if the lure comes crashing down. They’re used to turtles and frogs and snakes walking on that mat, so the noise can actually be a trigger that gets them to look faster.”

Most of the time Shryock likes a heavy-gauge straight-shank worm hook as opposed to an extra-­wide-gap model for short-line presentations. “I tend to get more skin than bone and meat with a wide gap when flipping,” he says. “A straight-shank hook bites in much better when you’re setting with only a short amount of line.”

°For years, bass on offshore structures have been bombarded with all sorts of bottom-­bouncing lures like jigs, big worms, and Carolina rigs, but the evolution of crankbaits that can reach depths in the 20-foot range have changed the entire approach to deep bass. These lures rocket through the strike zone and deflect off underwater obstacles, triggering bites and keeping schools of bass fired up. Developing the deep-cranking touch will let you score piles of fish in the depths instead of just a couple on plastics.

°Become an electronics nerd and learn to identify travel routes and deflection points. Combs says that the best way to become a better deep cranker doesn’t require a rod in your hand but rather your face plastered to your graph. If you have multiple big, modern units with side imaging and down imaging, that helps, but even a single smaller screen can tell you what you need to know. Failing that, get the best topographical map you can find—or even better, multiple versions of the same map.

“When I’m out in 15-plus feet of water, most of the time I won’t fish until I see bass on my graph,” Combs says. “If you can’t do that, go out to the end of a main lake point. Some of my favorite places have sparse cover on them. I like it when my crank comes right over the top and hits that one piece of hard cover really hard. You’ve got to get noticed before you get any bites. That contact gets a lot of attention and draws reaction strikes. If you bang that off the structure two or three times in a single cast, that’s perfect.”

Combs says that many new crankers get caught up in having dozens of color patterns. He says that there are certainly times when bass react better to one paint job over another, but that’s putting the cart before the horse. “With a simple shad pattern, you can catch bass just about anywhere,” he says. “It’s far more important to know when your crankbait is doing the right thing than worrying about color.” That often means switching to tighter-wobbling models when it’s cold, and hard-thumping wide wobblers in the heat. But sometimes on pressured waters, he’ll tie on the one that wiggles more subtly, even in the heat of summer.