Well along in the 21st century, we have good news and bad news. Some of the bad news is that... 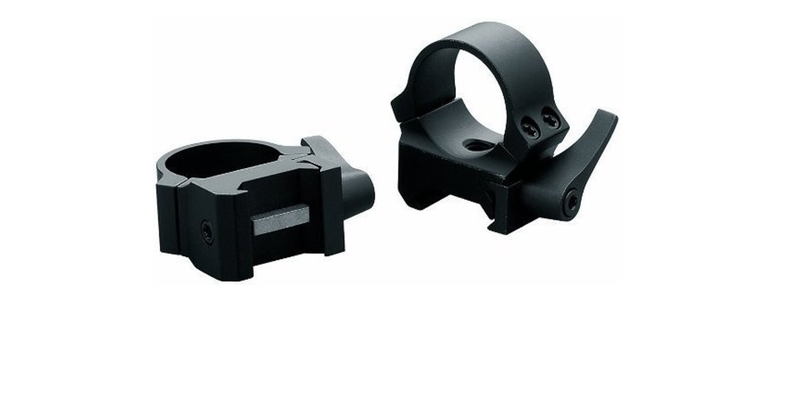 Well along in the 21st century, we have good news and bad news. Some of the bad news is that our colleges seem to have become lunatic asylums and places where free speech dares not show its face. And, if you’re looking for enlightened political behavior you’ll do better in any well-led baboon troop than you will in Washington, D.C.

But as for rifle scopes, it’s all honeysuckle and roses. What we have is marvelous, and getting better every year.

The question then becomes, since QD mounts are designed to let you get rid of your rotten scope in a hurry, why use them if there are no more rotten scopes? The answer is, they’re still useful, but you want to think about what takes their place.

The original premise of QD mounts was that, when your scope crapped out, your iron sights would not, and you could shoot almost as well with no glass as with glass. This rested on several assumptions: First, that your eyes were good enough to use iron sights, which means that you could keep three things in sharp focus simultaneously, which is optically impossible. Second, that your iron sights were visible enough, and could be adjusted precisely enough, and would hold their zero reliably enough, to give you at least an even break.

Even a person with very good eyesight can’t focus on the target, the front sight, and the rear sight. That’s why Jeff Cooper, in designing the Scout Rifle, specified a ghost ring rear sight, which you pick up only subconsciously and as a blur. That’s why the armed forces have kept iron sights as emergency backups, and have gone to red dots, which keep everything in one focal plane.

When I worked out the sighting equipment for my Ruger Gunsite Scout, I found that my eyes were so far gone that the iron sights were of little good, even though the front post is nice and big and the rear ghost ring is both precise and rugged. I saw that with divine intervention I might be able to hit a washing machine at 20 yards, but not much else. So I bought a red dot, with which I have no trouble at all.

If your eyes are good, within 200 yards you can shoot the Scout’s iron sights as well as you can a low-power scope.

Dangerous-game rifles have traditionally been equipped with a front sight which may or may not be useful, and an open rear sight, ditto ditto. These sights are (or aren’t, but should be) designed for ranges at which you are about to get buffalo drool on your boots, or lion slobber on your pants where it will look like you have wet yourself. A small brass bead, which is what so many rifle makers use, is worthless. A big ivory bead is fine; a fiber-optic sight is better still.

For a rear sight, a very shallow V is best, and even better if it has a big gold triangle or line inlaid at the bottom of the V. Among the sillier objects on earth are the “express” rear sights with folding leaves for 200 and 300 yards. Nonsense. Take a shot at a dangerous game animal at 300 yards and your PH will beat you severely about the head and shoulders. You want one fixed, perpetually immovable rear sight set for 25 yards.

However, even the best iron sights are not nearly as fast as a red dot, and I believe the fastest sight of all is a 1X or a 1.5X scope with an illuminated reticle center, such as the Trijicon I took to Zimbabwe last year.

In 11 safaris and many excellent adventures with dangerous game I’ve never had to take off a scope to get at the iron sights. During my first two trips to Africa I didn’t even have iron sights on my heavy rifle; I had a scope that went down to 1.5X. I killed large, slobbering animals as close as 10 yards and never wished for open sights.

If you’d like a different perspective, allow me to quote my friend and colleague Terry Weiland, who has done a ton of African hunting:

“I have removed the optical sight for iron. It most cases there was no need for it, but it was an available option. In one case I wanted to do it, and really, REALLY could have used it, but the rifle was fitted with one of those early detachable Leupold mounts with tiny levers. When you fired the rifle they tightened to the point where you needed a pliers to loosen them. Not having a pliers, I was left to face the beast with scope in place and it was NOT good and was a very close call. I fired my last shot into his forehead at four feet as he came.

“I have never used those mounts again.

“My .450 Ackley has claw mounts, and that is my vastly preferred mount for such rifles. You didn’t ask, but I would not have a bolt action for dangerous game without good detachable mounts, and by that I mean instantly detachable, with one hand, without looking down, like the claw.”

If you’re a prepper, and looking for backup sights for those dark days when you can’t get replacement scopes because there aren’t any, iron sights are fine, again if your eyes are good. If not, get a red dot. Many of them have batteries that live for tens of thousands of hours, and the Trijicons don’t even need batteries. You’ll either starve to death yourself or be killed and eaten long before your batteries run out.

As for the actual QD mounts, I have extensive experience with only two, so I’ll talk about those and ignore everything else. Talleys are the top of the line. They’re so good mechanically, as well as nice looking, that custom gunmakers who used to build their own rings and bases, now simply use Talleys. They mount on top, get the scope down low, and mount and remount instantly.

Talleys use a nice big locking lever, and here a word of caution is in order. I’ve seen people whale on that lever with hard objects, hard enough to lock it down so tight that you can’t get it off with your fingers. Never use more force on the lever than you can exert with your bare hand. Imagine an enraged lion in the bush and you looking for a nice smooth rock to bash your rings with. I’ve found also that over time, and shooting, the levers work themselves tighter, and I’ve taken to putting a very small bit of gun grease on the lever bearing surfaces (NOT the inner surfaces of the rings). This has worked out fine, but if it’s the wrong thing to do I trust the folks at Talley will advise me and I will inform you.

Whilst in Africa, I made it a practice each morning to give a tug on the ring levers to make sure they were snug; this done, I could then concentrate on not stepping in fresh buffalo poop or not stepping on puff adders.

On my various Scout rifles, I use Leupold QRW quick release rings. They work via locking levers and the same cautions apply here as with the Talley Rings. QRWs are very simple, strong, will get you back within about an inch of zero, and don’t cost a fortune. They’re reasonably ugly, but do we care? They have to tendency to torque the scope clockwise or counter-clockwise as you tighten the ring screws, but bear with it. I like them, and nothing’s perfect.