Ontario Honker Hunter requested this, and by gum, what OHH wants, he gets. Anyway. “QD” stands for “quick detachable,” and... 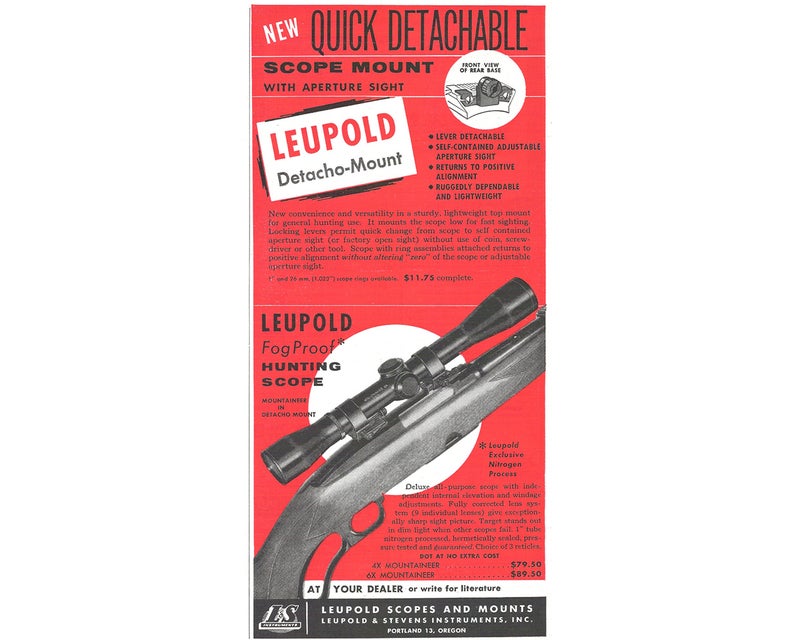 Ontario Honker Hunter requested this, and by gum, what OHH wants, he gets. Anyway.

“QD” stands for “quick detachable,” and is not an abbreviation of Q.E.D., which stands for “Quod erat demonstrandum,” which is Latin for “which was to be demonstrated,” which was traditionally put at the end of a mathematical proof, but is probably not done anymore because someone objects to Latin because the Romans practiced slavery, or because it violates someone’s Safe Space. But I digress.

QD scope mounts go back, I think, to the very first hunting-rifle scopes, which is roughly the 1920s, and were based on the very real premise that early hunting rifle scopes were devices from hell that would fail at the first opportunity, leaving you with a sickly smile and a thumb up your ass as whatever you were unlimbering to shoot at ran over the next ridge.

Scopes leaked. Reticles broke. Reticle adjustments broke. Lenses shook loose. The scene in Horn of the Hunter where Robert Ruark takes the ruptured scope off his rifle and flings it into the African bush is typical of the time. If you read Jeff Cooper, whose shooting career began in the Era of Rotten Scopes, you can see plenty of this hatred and mistrust of sights optical.

There were still plenty of Rotten Scopes around in the 1950s; it was probably not until the ‘60s that most of them had evolved into something pretty reliable. Still, one did not dare put a rifle on the market without putting iron sights on it; never mind that many factory iron sights were, and are, surpassingly awful. When Roy Weatherby brought out his Mark V rifle in 1958, one of the most radical things about it was the absence of iron sights. Roy bet everything on glass, and was vindicated, but at the time, some people considered it madness.

Thus, the QD mount. The principle behind the things was that you could get your busted scope out of the way or off the rifle altogether in a few seconds without tools and use the iron sights. Everyone and his brother made a QD mount, and they broke down into roughly two types: the ones that let you remove the scope altogether and throw it away, and the ones that allowed the scope to pivot to one side so you could see the backup sights, and throw it away at a more convenient time.

Almost without exception, both types relied on a mounting plate that was screwed or pinned or both to the solid side of the receiver. This had to be done by a gunsmith. Some, like the Echo mount, were relatively simple and inexpensive. Others, like the Griffin & Howe side mount, were miracles of complexity (the G&H side mount, by the way, is still made by the company, and costs $1,000 or so, installed).

Pachmayr made a mount called the Lo-Swing which mounted on the top of the receiver. This was a pivot mount, and a good one. Leupold produced the Detacho-Mount, which was one of the few simple ones. It was a top-mount mechanism, and very much resembled the mounts that are now used with Picatinny rails. In the 1930s, Weaver made a thing that everyone called “The Grasshopper,” because it employed several large, fragile springs that gave it the look of the garden-chomping insect. Later, the company came to its senses and offered a series of very simple, hugely popular QD mounts, including their own pivot mount.

The mounts made by Bausch & Lomb and Kuharsky Brothers were not considered QD mounts. They were designed for Bausch & Lomb Balvar scopes which were made without internal adjustments; windage and elevation was in the bases. This system allowed you to swap one scope from rifle to rifle without losing zero. I used both the B&L and Kuharsky bases, and preferred the latter. I had Kuharskys on four Weatherby Mark V rifles, and found that the system worked well if you had a very light hand on the adjustments. The Balvar scopes, by the way, were excellent. As I recall, they were one of the very, very few optical sights of the 50s and 60s that would stand up fairly well today.

You have to take all this within the context of its time. Scopes back then had non-centered reticles, and if you didn’t want the crosshair way up in the northeast quadrant of your field of view, your bases had to have windage and elevation built in. This was an enormous complication, and changing scopes was something you did with the utmost reluctance, and only after months of prayer, fasting, and ritual purification.