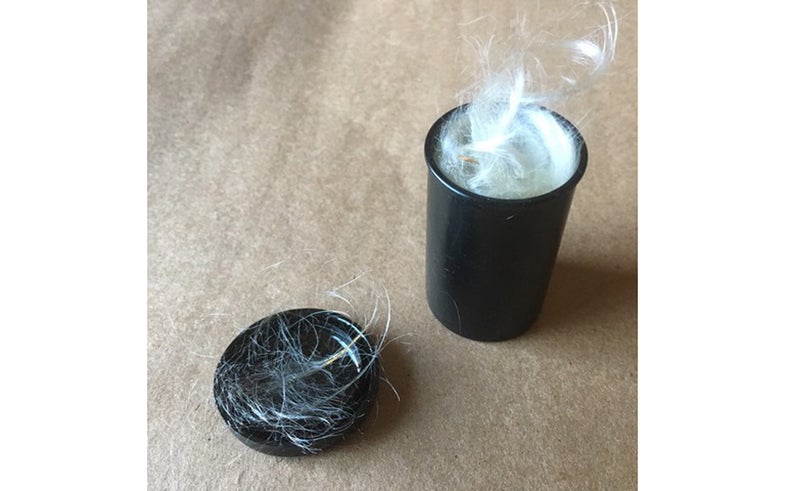 Enough bull thistle down to last through this season and beyond. By the author
SHARE

If you hunt America’s favorite big game animal—or anything else that depends on its nose—nothing is more important than knowing what the wind is up to. This is a lot harder than it sounds. Wind is like water moving over the land. And if you know anything about fluid dynamics, you know that that is almost infinitely complicated.

A wind that is blowing northwest miles at 8 mph at 20 feet, for example, may well be drifting 1 to 2 miles an hour southwest near the ground. You might want to move that stand.

There is, by the way, no such thing as a “windless” day. Air is always moving. If it doesn’t seem to be at the moment, just wait a couple of minutes.

I remember a red stag guide in Scotland who had two clients 500 yards directly downwind of some magnificent animals. Normally, that’s a no-go. But he noticed the deer were feeding in a notch, and off to one side of the notch. Further, he knew that wind swirls in such places. Further still, knowing that animals don’t care for swirling winds, he predicted that they would keep moving in the direction they were headed until they got to steadier winds. Long story short—I’m not sure I understand this completely, but the guide sure did—he was able to hustle his clients directly upwind towards them and kill the largest. It was all about the “carry,” which is what Scotch highland hunters call the behavior of the wind.

The absolute best wind indicator available is the down of the bull thistle, which is free and abundant along roadsides, pastures, and waste areas. Now is the time to get it. A single film canister of the stuff will last you years. (I filled the one in the photo three years ago and figure it’s good for another five years of hard use.) The fluff carries the seed of the plant, and Nature must have taken a special interest in the survival of the bull thistle, because that fluff can carry seeds a country mile on the slightest puff of air. I’ve often released a single strand and watched it float up and out of sight on what I thought was no wind at all. Try that with any of the talcs on the market. They drop like No. 6 shot by comparison. What you want to do is take the smallest amount you can between your fingers and hold it up against a dark background so you can see it. Evergreens are especially good for this. You usually have to blow on it to get it off your finger tips. Then, for the next 30 to 60 seconds, you’ll know exactly what the wind is doing. And it’s almost never what you think.