With the 100th anniversary of the World War I armistice, our shotguns editor looks back at “the day the duck hunters died.” 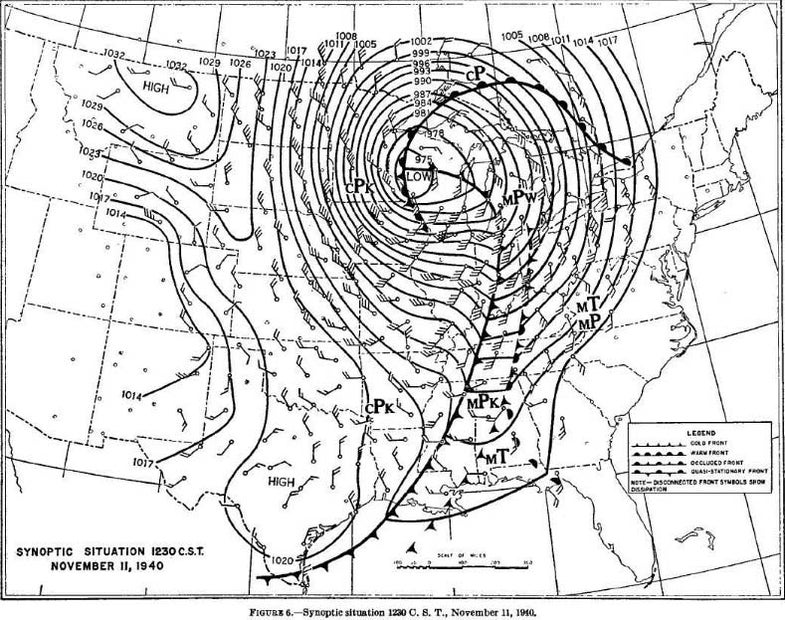 A weather map of the Armistice Day Storm of 1940. The storm moved more than 800 miles in six hours. National Weather Service
SHARE

There was a lot to remember yesterday, November 11, especially on the 100th anniversary of the end of World War I. Down the list of things to memorialize on that day, but still well worth recalling, is the Armistice Day Storm of 1940.

You don’t read about the storm as much as you used to. For years, “The Day the Duck Hunters Died” was a staple story in outdoor magazines. I was thinking about it recently in light of the Ten Best Hunting Inventions of My Lifetime post I wrote recently, and I realized “weather forecasting” should have made the list.

With the ability we have today to track incoming storms, the Armistice Day Storm of November 11, 1940, would have been have been dangerous, but it wouldn’t have been as tragic. In those days, however, the Weather Bureau’s Midwest Headquarters in Chicago wasn’t even open at night. The Bureau made two forecasts a day, released mid-morning and mid-evening. Obviously, there were no weather satellites, and meteorologists didn’t have many ways to look at the upper atmosphere, either. Weather forecasts were wrong often enough that people didn’t always take them seriously anyway.

What hunters on the Upper Mississippi knew that day was the weather was mild and the forecast called for cooler temperatures and a few flurries later in the day, promising conditions for a good hunt. And, a lot of them had Armistice Day off, so they could hunt. It was warm enough many went out in shirt sleeves in small boats, making their way to islands on the Mississippi.

As the temperatures dropped, ducks streamed down the river. They knew what was coming, and they wanted no part of it. Between 1:00 and 4:00 p.m., the end of shooting hours back then, temperatures dropped 25 degrees. The hunting was phenomenal, and even as the weather worsened, hunters stayed out to shoot. Rain turned to sleet, then white-out snow, winds blew 30 to 50 mph, making the river too rough to make the trip back to shore.

Overnight temperatures fell into the single digits. Trapped hunters spent the night on islands, huddled under overturned boats, and many never came back. Overall, the official death toll from the storm across the region was 154, including people lost on the Great Lakes and inland, where up to 26 inches of snow fell. Estimates vary, but as many as 50 duck hunters perished on the river.

Like World War I, the Armistice Day Storm is passing from living memory as even those who were very young are now in their 80s and 90s if they are still alive. Many who of those lived through the storm went on to serve in World War II. The only man I knew who survived the storm—he spent a night on an island—also survived the war in the Pacific and died not long ago.