Today the Senate confirmed Rep. Ryan Zinke as interior secretary, charging him with overseeing more than 400 million acres of... 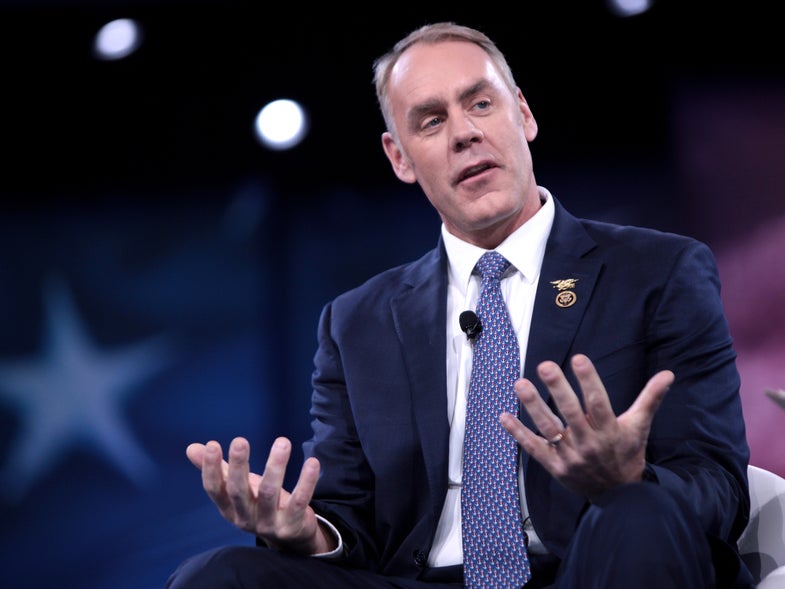 Today the Senate confirmed Rep. Ryan Zinke as interior secretary, charging him with overseeing more than 400 million acres of public land and the agencies that manage it, the AP reports. As a part of his duties, Zinke will oversee the U.S. Fish and Wildlife Service, National Park Service, and Bureau of Land Management, in addition to other agencies.

Zinke, an outdoorsman and a former Navy SEAL, has supported keeping Western public lands within the people and the federal government’s control, and not transferring them to the states. In January, Zinke, told the U.S. Senate Committee on Energy and Natural Resources that he is an “unapologetic” admirer of Teddy Roosevelt and that he is particularly concerned about public access. Zinke also told the committee that he recognizes the “distrust, anger, and even hatred” some citizens hold for federal management policies. He added, however, that he wants to restore citizens’ trust in the federal government and work with communities and states to resolve their grievances.

Sportsmen’s groups such as the National Shooting Sports Foundation, the National Rifle Association, Boone and Crockett Club, the Mule Deer Foundation, Rocky Mountain Elk Foundation, the Theodore Roosevelt Conservation Partnership, and Backcountry Hunter and Anglers had each extended support for Zinke’s nomination prior to today’s confirmation.

When the Senate advanced Zinke’s nomination on Feb. 27, Backcountry Hunters and Anglers issued a statement in which president and CEO Land Tawney said that he looks forward to working with Zinke. “His support of continued public ownership of our lands and waters and public access programs like the Land and Water Conservation Fund,” Tawney said, “along with his intimate understanding of sportsmen’s values speak well of his ability to succeed as interior secretary.”

Despite Zinke’s outspoken support of keeping Western public lands in federal control, in early January, he voted in favor of a move making it easier for Congress to transfer public lands to states. The rule that Zinke, and 233 other House members, voted to overturn required Congress to determine the value of public lands before transferring them to states or selling them to private organizations or people. Zinke’s vote provoked a swift outcry from sportsmen. “It’s especially troubling that Rep. Zinke, a self-proclaimed Roosevelt conservationist and possibly our next interior secretary, voted for this measure, because this is a major attack on Roosevelt’s legacy,” Brian Sybert, executive director of Montana Wilderness Association, told the Great Falls Tribune.

Moreover, Reuters reported in January that Zinke would consider expanding drilling and mining activities on public lands, though he said “sensitive wildlife habitats” would remain protected.

It remains to be seen whether the Trump administration as a whole will support keeping public lands in the hands of the people and the federal government. In January 2016, Trump told Field & Stream that he doesn’t like the idea of transferring lands to states. “You don’t know what the state is going to do,” he said. “I mean, are they going to sell if they get into a little bit of trouble? And I don’t think it’s something that should be sold.”