How to Call in Resident Canada Geese

Dial down pitch, volumne, and frequency to pull in more local honkers 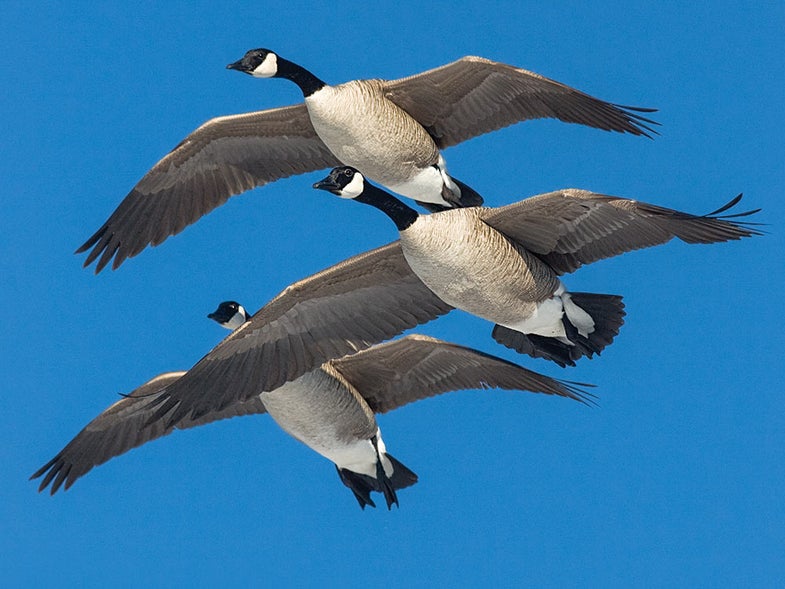 Looking to Land: Coax in birds that used to fly over your setup.. Donald M. Jones
SHARE

Early-season resident Canadas aren’t as talkative as their migratory kin. Try to chat them up too much and they might avoid you like I avoid cocktail parties. This is true no matter how good a caller you are. How do I know? I talked to two world-champion goose callers, both of whom dial down their own calling for local geese—that is, until they have to crank it up, a little. Here are their secrets.

“Resident geese know every puddle for miles around and whether or not the slight bump of your layout blind was there yesterday,” Rogge says.

“If you’re in a spot that geese have been using regularly and the birds are working, don’t give them any reason to become suspicious by calling aggressively. Instead, you need to keep it minimal. As in none.”

If approaching birds need a little encouragement, Rogge will throw them a few single, quiet clucks or feed calls. But what if the quiet stuff doesn’t work?

“My ace-in-the-hole calls are the double-cluck—a two-note, low-high call—and the quick spit, also a two-note call, produced by saying ta-who into the call. Both are short, excited calls that can turn resident geese quick, but I hold them in reserve for when I really need them.”

Overall, the less calling you can do to get the job done, the better, he says.

“This can be hard for guys who are in love with their own calling skills, but it’s important because, although resident geese aren’t smart, they imprint very quickly. In a single day, they can learn that excited calls mean danger, and then avoid those places.”

There are times when resident geese raise a ruckus, but compared to migratory birds, they’re less vocal and have deeper voices.

“Softer air tends to yield a deeper tone,” he explains, “so I adjust my airflow. Others switch to a longer, more deeply tuned call.”

Mann’s favorite vocalizations for resident geese are the honk, the moan, and the double-cluck. “Everything a Canada goose does is a honk or part of a honk,” he says. “A cluck is just a very short honk, for example. A moan is half a honk, but drawn out.” If you learn to produce a good low-pitched honk, you’ve got the building blocks for everything else.

“The moan is that long, drawn-out awwwwwwww you probably associate with those heady moments when birds drop their landing gear,” Mann says. “It’s a good closer call to get birds to commit. But it’s also ideal when birds sneak up and you haven’t had a chance to greet them with a honk. The double-​cluck is a low cluck followed by a higher one, often in run-on form: cluck-click, cluck-click, cluck-click… It’s an excited call sometimes made by a single goose landing or by geese challenging one another. And it can get birds that are not very excited about your setup excited in a hurry.”

But like Rogge, Mann uses this call sparingly for resident birds. “Overall, a little bit of quality calling goes a long way.”