Restoring Mule Deer Habitat, One Swing at a Time

From the jobsite on the mesa above Glenn’s Ferry, Idaho, you can look south over the deep green of the... 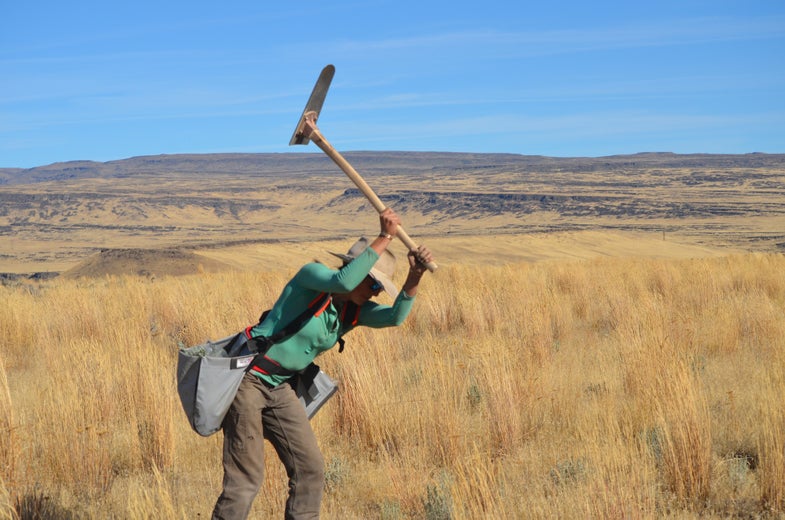 From the jobsite on the mesa above Glenn’s Ferry, Idaho, you can look south over the deep green of the Snake River plain and the mighty Snake itself, beyond to the Jarbidge Mountains of Nevada, hazy and beautiful in the distance. The mesa is part of the Bennett Hills, a vast expanse of mostly Bureau of Land Management land, and the winter range for an estimated 10,000 mule deer. It is a place of mahogany-colored jagged basalt, burned over too hard in the 2011 Blair Fire, an austere desert landscape that stretches to the far northern horizon, where a few tough Ponderosa pines show against a white sky.

Before the Blair Fire, this was big sagebrush country, prime winter range, and a favorite destination for local mule deer hunters looking for toads. Since then, it has become colonized by a storm of invasive weeds from the steppes of Eurasia, cheatgrass, medusahead, rush skeleton weed…none of them good for native wildlife or livestock. It is a kind of perfect storm of loss. When the fires burn here now, they burn so hot in the mat of invasive weeds that only the cheat and the medusa head can come back. Without the big sage plants to catch and hold the winter snows, there is less water in the soil every year, again favoring the invasives over the old native grasses and shrubs so crucial to our mule deer here.

My crew and I are here to plant 80,0000 seedlings of big sagebrush, on a public land restoration job that is a partnership between the Mule Deer Foundation, the Idaho Department of Fish and Game, and the U.S. Bureau of Land Management. If we do our jobs right, and with a little help from the weather, and a little luck that will hold off fires for a few years, this mesa, and the yawning big winter ranges all around, can be big sagebrush country again, with big bucks and flocks of sage grouse, and all the components of a healthy and productive land.

For almost 20 years I’ve been writing about conservation and conservationists. Now I’m getting the chance to put my own pair of White’s boots on the ground, and do some of the actual work of making things better.

The hoedads rise and fall, the line of workers lost in the immensity of the mesa. The planting unit is almost exactly one mile wide here, bound by a bony two-track road at our starting point, and the cliffs that fall away to the north. We deliver boxes of seedlings to the planters with two ATVs and a UTV, hauling packs filled with energy bars and fruit, and jugs of water. When we run low on plants, BLM workers negotiate the grim approach “road,” a steep two track of basalt boulders that spears through a break in the cliffs, hauling new boxes from a refrigerated truck parked so far below that it is just a white speck on the plain.

Eric Freeman, a local Idaho Fish and Game employee who knows this mesa like the back of his hand, is dropping off boxes and drinking water on a mound of shale rock, tying a length of orange flagging to a tall patch of crested wheat grass to mark the stash for the lead planters. It’s the second full day of planting, and people are getting faster, smoother, falling into the rhythm of the work.

A lone sage grouse hurtles by, startled by all this sudden movement in this empty, wind-swept place. The crew ranges from our lead planter, Jeremy Oday, a logger and small farmer in the Yaak Valley of Montana; to my nephew, Kim Bass Clanton, a whitetail hunter, obsessed fisherman, and U.S. Forest Service firefighter from Deerfield, Virginia. There is Blake Votilla, a mountaineering guide who bases out of the Bitterroot Valley in Montana; and Austin Waisanen, of Greybull, Wyoming; and Raina Phillips-D’Angelo, a backcountry ranger, mother of two, and small farmer in Challis, Idaho. Everybody on this crew has an ability to live and work outside, and to plant an average of about 800 to 1400 sage seedlings per day, all day, every day, in any kind of weather, until the job is done.

I’ve carefully handpicked this bunch of 11 American badasses for this particular restoration job, and, as it turned out, I chose well. On October 13th, we finish the last boxes of seedlings before mid-afternoon, bringing the job in one and half days under schedule: 80,000 seedlings in eight and a half tough days of planting, just ahead of a cold front laden with wind and rain.

Working partnerships like this one, between state and federal agencies and pragmatic conservation groups, are the future of wildlife habitat restoration on public lands in a time of lean budgets for agencies like the BLM, and at a time when such restoration has never been more needed. We worked with BLM’s Danelle Nance, who is also coordinating some big crews planting and restoring sagebrush habitat with the conservation group Pheasants Forever, a partnership that dates back over five years now.

“In the middle of that PF planting, we got three quarters of an inch of rain,” Nance told me recently. “Getting anywhere in gumbo and sand was a mess, but we managed to get all the plants into the ground.” This year, she said, including our job at King’s Hill, the partnerships will result in 175,000 sage seedlings planted. “That increases our capacity so much,” she explained. “It frees the BLM to take on this kind of restoration on what is truly a landscape scale, which is what we need in the wake of these bigger fires.”

All in all, about 1.5 million seedlings will go in the ground this fall on Idaho public lands managed by BLM. “We’ve got this Mule Deer Foundation project, we’ve got our own planting projects, we’ve got Rocky Mountain Elk Foundation working with us planting bitterbrush and sage and doing aspen restoration on the Jarbidge Field Office, and we have all of these PF projects, both planting and taking out invasive juniper,” said Nance. “These partnerships are really the cutting edge of how to get big things done right now. We’ve got a new project with Idaho Fish and Game planting willows and restoring fish habitat on the Little Wood River, where a lot of the work is being done by volunteers.”

It is a fairly straightforward deal that packs a big punch, says IDFG’s Matt Pieron, a biologist leading the state’s Mule Deer Initiative. “Our guys like Eric Freeman were crucial in identifying the priority areas. They had the local knowledge of how mule deer use these landscapes, backed up by a lot of telemetry and GPS data. We identified traditional ranges that weren’t getting used anymore, and new areas that were suddenly becoming important to big herds, and we’re working with the BLM to concentrate restoration efforts there.”

IDFG provided the sagebrush seedlings for the King’s Hill project, and the Mule Deer Foundation stepped up with funding for the labor and other costs. BLM monitors the work both short- and long-term, and provides staffers to help haul plants and support the jobs in progress. On our job, consulting biologist Steve Belinda, the Executive Director of the North American Grouse Partnership, was the project manager (as Belinda noted, “The Grouse Partnership and the MDF have the same goal of restoring the sage and shrub ecosystems that both mule deer and sage grouse depend on. A project like this is a perfect fit”).

My crew and I will be working on this project for at least the next two years, restoring American sagebrush habitat on our own public lands, and putting our hard-earned dollars into American businesses in good towns like Glenn’s Ferry, and in our own hometowns and states. We’re looking for lots more partnership work, as are the Mule Deer Foundation, Pheasants Forever, Rocky Mountain Elk Foundation, the Grouse Partnership, and many other conservation groups.

One of our crew members, George D’Angelo of Challis, Idaho, was headed home to work on another habitat restoration job with the BLM and Trout Unlimited on the Pahsimeroi River (when he’s not swinging a hoedad, George and his wife Raina also run the River of No Return Brewery).

There has never been a time when so much work needed to be done by American hunters and fishermen, nor when there was such a clear road to being directly involved in restoring and bolstering the health of our own public lands and waters. These are huge projects, already well underway, with more on the drawing boards, and they need our efforts to make them succeed. Volunteers are more than welcome on most of them. Anybody who hunts the West, or who cares about the future of our public lands, can find out what they need to know by contacting these groups: