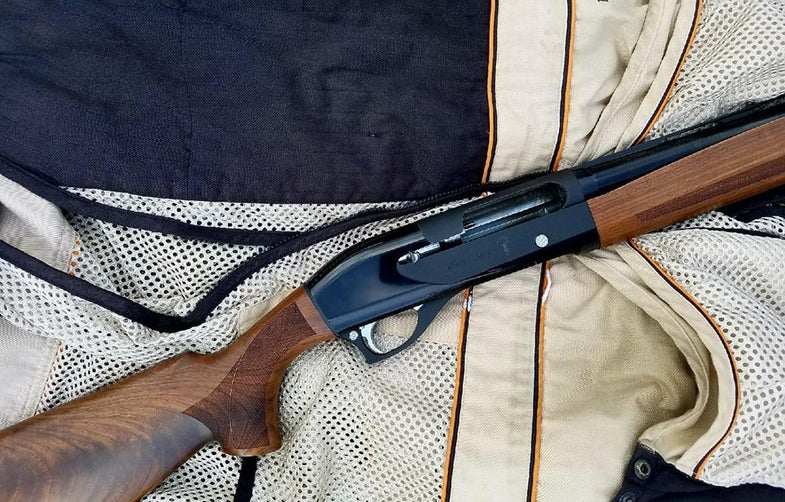 After a round of Skeet and 5-stand, Retay's new shotgun left the author impressed. Phil Bourjaily
SHARE

Clint, the hunting manager at the store where I pick up loaner guns, took a look at the Retay Masai Mara and said, “I’m impressed, and I don’t say that very often anymore.”

Sadly, I, too, have become jaded by the race to the bottom in shotgun fit, finish, and price. It’s refreshing to see a gun like the Masai Mara, which looks as if it were made with pride and skill. It definitely stands out among the crowd of inertia guns introduced since Benelli’s patent expired. It’s a well-made, good-looking semiauto, and while it’s not meant to be a budget gun, it is priced almost $150 below the comparable Benelli, which would be the Montefeltro, my personal favorite Benelli.

Retay is a Turkish maker, founded in 2006, the same year the Benelli patent expired to make Benelli-like shotguns. The video I saw of the factory shows a facility as clean and high-tech as anything you would find in Italy, and the resulting gun is not the typical Benelli knockoff. It has some unique features: an instantly removable trigger group and a “no click” bolt. The trigger group isn’t held in place by the usual pins. To take it out, you push a button near the trigger and pull it out. Although it may be a solution to a problem that doesn’t exist,* it’s a neat piece of engineering

The click-free bolt, on the other hand, definitely meets a need. Inertia guns can get bumped out of battery easily, or fail to close completely if you ease it shut for stealth. When that happens, the gun goes “click” instead of “bang.” It’s dispiriting. Benelli patented a detent pin that cures the click in the Ethos and the SBE3. No other inertia gun has that feature, except the Masai Mara, which has a click-proofing system of its own built into the bolt. It also has a very clever removable ejector, which again may not materially improve the gun, but it speaks to the care with which it’s designed and put together.

The wood on the sample gun is dark, richly figured walnut (they call it “luxury,” I’d call it AA; whatever it is, it’s lots nicer than the wood on my Montefeltro), and had a matte oil finish. The receiver is two-tone matte and gloss anodized black. It has a soft recoil pad and sling swivel studs come standard.

My test gun had a 30-inch barrel and weighed a little more than 7 pounds. Like many inertia guns, it feels great in your hands because the forend can be made quite slim and the gun balances very well, as there is no gas system up front to add bulk and weight.

I shot it at Skeet and 5-stand and thought it was easy to hit with. The trigger breaks just under 6 pounds—fine for me, less fine for the sensitive among you—and the long barrel helped the gun move smoothly to the target. The 30-inch version would make a terrific dove gun. It gun cycled everything I fed it, including 7/8-ounce reloads. The more I shot it, the more I thought, “I really like this gun.” If I had to find fault with it, I’d say I wished the safety button were bigger, but I’m reaching here.

I haven’t had it long enough to put it through the kind of torture that Benellis survive every day in Argentine dove fields, but from what I have seen of this gun so far, it looks like a winner, and it lists for just $990 in walnut, $799 in black. Camo guns are available, too. It comes in a choice of 24-, 26-, 28- and 30-inch barrels in a plastic case that’s a bit of an upgrade over most of the hard cases semiautos come in, and it contains five chokes shims and a snap cap.

*According to the manual, you can “take the trigger group out and keep the gun safe in bar or living room,” so there’s that. Maybe it made more sense in the original Turkish.