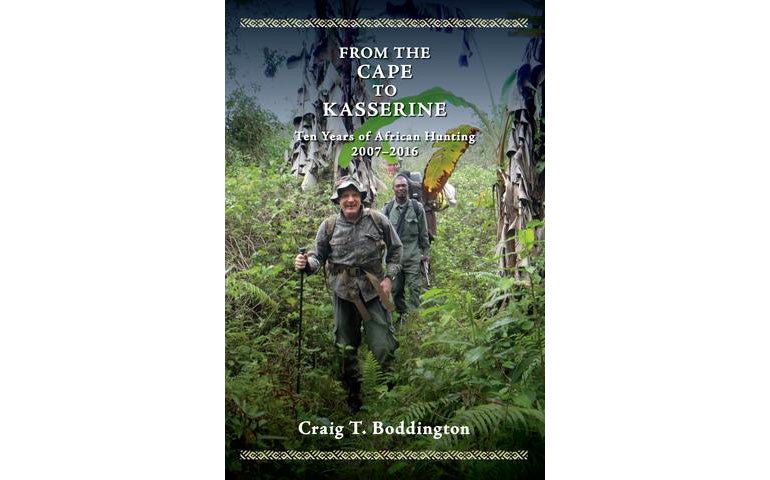 Boddington's book on his most recent ten years of African safari. From craigboddington.com
SHARE

I believe I’ve decoded Craig Boddington’s role in life: He’s here to go to all the exotic places we will never see and report on them. In the course of doing this for the past four decades, he’s earned the Weatherby Hunting and Conservation Award for 2017. This is presented only to the most serious, and successful, big-game hunters of world-wide experience. The last gun writer to earn it was Warren Page in 1958.

This book is the chronicle of Craig’s safaris from the last decade, and the fourth in his series of ten-year books. It takes us from northernmost Africa (the Kasserine Pass, where in 1943 Generalfeldmarschall Erwin Rommel taught the U.S. Army II Corps that you really don’t know what war is like until you’ve fought the Germans) to the Cape of South Africa, which is on the bottom of the continent. In between, it visits regular safari stops such as Zambia and Zimbabwe, and some that very, very few hunters get to see: Ghana, Burkina Faso, Liberia, and Cameroon.

What sets this book apart is its tone: It’s the polar opposite of something like Death in the Long Grass or Horn of the Hunter. There are no dramatics. On many of these safaris, Craig had his family along, which makes fooling with the Reaper a poor idea. Instead, it’s relaxed, and chatty, as though you were leafing through a scrapbook of Africa photos (Craig takes lots) with him there to tell you about the hunt in detail.

Many of the species Craig took are unusual and little heard of, and interesting. It’s not the usual buffalo-lion-elephant-kudu recitation that most Africa books deal in.

One thing did leap out at me, as it were. There’s a chapter on the Kalahari (Desert, Botswana) lion, with photos of two of the biggest lions since the species evolved. They’re the only photographs I’ve ever seen that give a true picture of how massive these cats are.

And: One of the two men to whom the book is dedicated is Craig’s father, who was a naval aviator during World War II. Let Craig tell it:

“He was carrier-based in the Pacific, flying off the USS San Jacinto, time and again having to find the postage stamp of the carrier by dead reckoning and kneepad calculations. In 1945, when he turned off his switch for the last time, he swore he would never again fly over blue water…and he never did. Every time we brought [Africa] up he’d consider it seriously, and then come back to the same conclusion: ‘Nope, I’m not going to cross an ocean.’”

Haunting. As is Africa. That’s why we keep going back.