Rewriting Conservation in the 21st Century 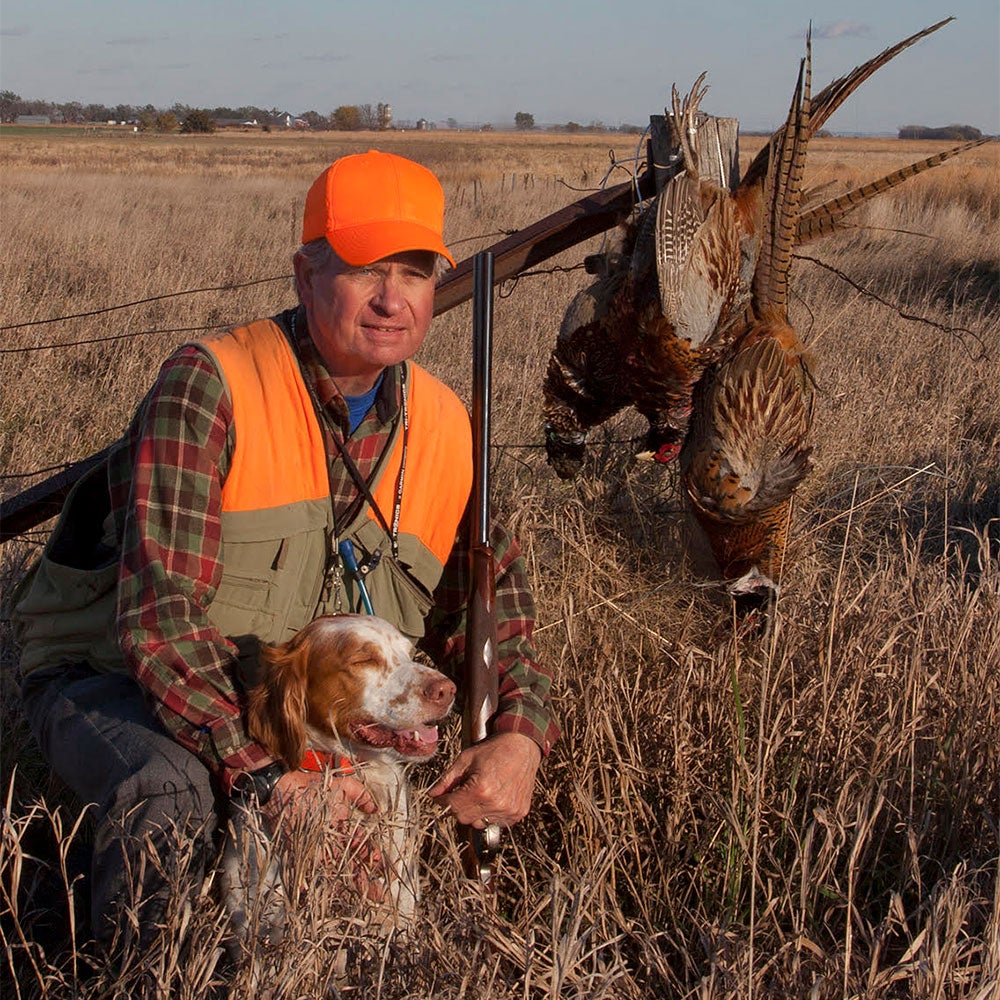 It took me a week or so to catch up to Chris Madson on the telephone because he was on a month-long road trip, following what he calls his Solstice Rule—30 days, or more, of camping and chasing roosters and sharptails across Wyoming, Montana, and down through western Nebraska and Iowa, before the winter solstice on December 21. “The dogs and I have been working our tails off this year,” Madson told me. “Twenty-eight days, 26 wild roosters, and now I’m headed home to Cheyenne. I kind of feel like this is a day of mourning. It is pretty much all over for us until next September.”

I’ve known Madson for about 15 years now, as a friend, a source for stories, and a clearinghouse for information on conservation and hunting. He knows a lot, and he’s earned that knowledge: Madson worked 30 years as the editor of Wyoming Wildlife, which he made one of the most beautiful and respected state game-and-fish magazines in the U.S. Before that, he spent six years working for the Kansas Department of Wildlife, putting to use his master’s degree in wildlife ecology from the University of Wisconsin.

But it was Madson, the writer, who I first came to know—specifically through his Wyoming Wildlife column, “The Land Ethic,” which he named after an essay in Aldo Leopold’s seminal text of American conservation, A Sand County Almanac. Madson began his writing career following in the footsteps of his father, who became an outdoor writer when he returned home to Iowa after serving as a bombardier on a B-17 during World War II, writing features for the Des Moines Register and producing wildlife and conservation books for publishers that ranged from the Winchester Arms Corporation to the Audubon Society. “My father knew Ding Darling and some of the other greats of his time,” Madson told me. “If I know how to splice two words together, well, a lot of it is because of him. You could say that I come by that talent honestly.”

Unlike his father, though, Iowa did not hold Chris Madson for long. “When I was 9 years old, we spent a night in Wyoming, in our little camper on Beartooth Pass, on the way to a family vacation on the Olympic Peninsula,” he said. “It took me until 1983—I was 30 years old—to find a job and move there for good.” He caught the elk hunting bug—and caught it bad. “Elk hunting took me over. I loved to hunt pronghorn and mule deer, but it has always been elk hunting that has been the main thing for me.” He killed his first bull in the Platte River Wilderness on the Medicine Bow-Routt National Forest, in the Platte River Canyon itself. “I was 31 years old, and that is still the hardest pack-out I’ve ever done. I was hooked.”

He had been reporting for years at that point, as editor of Kansas Wildlife (the magazine of the state fish and game agency) and as a freelancer for Outdoor Life, National Wildlife, Audubon, and other magazines, writing about everything from standard fishing and hunting stories to in-depth reports on the effects of pesticides on fish and wildlife, dewatering of tributary creeks by irrigation, and basically any environmental or conservation conflict that affected fish and game and the public’s access to them. This path led him, in 1983, to Wyoming Wildlife magazine, and to his column, “The Land Ethic.”

“The column was almost always controversial,” he told me. Madson did not shy from topics like the dangers posed by Wyoming’s dependence on feeding elk through the winters. (The feedgrounds, which concentrate elk abnormally, are considered a major disease event waiting to happen, and their continued use—because of development, agriculture, and simple geography, there is not nearly enough natural winter range to support large numbers of elk—is one of Wyoming’s longest-running wildlife controversies.) In my opinion, one of the best columns Madson ever wrote shined a light on the elephant in all of our rooms—human overpopulation, which is still a taboo subject in most mainstream conservation and fishing and hunting publications. Madson used a simple trip from Wyoming to Denver, gridlocked in traffic, navigating crowded streets filled with “combat drivers,” to ponder not just the loss of wildlife and fishing, but the loss to the very essence of human freedom that too many people, living in crowded spaces, inevitably entails.

Madson stayed at *Wyoming Wildlife *for almost 30 years, writing his column and hundreds of feature stories on every one of the major wildlife and sportsmen’s issues of the day in his state. It was a kind of total, life-long immersion in the world of the Western outdoors, combined with the demand for close study and analysis that is required of a professional writer and editor.

After he retired from the magazine in 2013, he planned to just fish and hunt, enjoy his time at home with his wife and family. But, as anybody who knows Madson will tell you, he’s not really cut out for relaxation. When the hunting was over, he was reading, writing, pondering, and writing again. His new iteration of The Land Ethic, essays he published on his website—I would not call any of his writings “blog posts”—was born in 2014.

In the first essay in a series called, “The Land Ethic in the Twenty-First Century,” Madson offers a concise history of how the U.S., unique among the nations of the world, created the vision and the tools for achieving the conservation successes that underlie every part of our modern hunting and fishing, and the economies and quality of life that those pursuits have created. He writes:

The discovery was repeated again and again as each generation of emigrants ventured into territory they considered to be unsettled, built their cabins, and lived off the fat of the land while they labored to transform it. As stands of old-growth white pine, chestnut, and oak melted away under the onslaught of the timber barons, as populations of bison and elk disappeared at the edge of the frontier and the passenger pigeon and Carolina parakeet began their free fall toward extinction, the idea of a more judicious approach to the management of natural resources steadily gained public support.

And so Americans began to organize. The trend began among zoologists and enthusiasts of natural history: the American Fisheries Society in 1870; the American Forestry Association in 1875; the Nuttall Ornithologists’ Club in 1873, which became the American Ornithologists’ Union in 1883; the Boone and Crockett Club, a gathering of influential patrician sportsmen and scientists, in 1887.

The essays are extraordinary. They are so well-written and carefully crafted that—as someone who has spends most days of his life writing and who knows how difficult the process can be—each essay must take him days to complete. Why did he do it? I asked him. Why did he come back to serious writing, for free, after so many years of doing it for a living?

“I was kind of driven to it,” he said. “The short answer is, I had spent 40 years thinking about our relationship to the land. But especially, I came across an essay called ‘The Death of Environmentalism.’ It wasn’t a new thing—it was written in 2005—but I only found it a couple of years ago. And it did not agree with what I knew about conservation.” The essay, written by two self-described “eco-modernists,” urged people to “decouple” from nature, and claimed that the failure of developed nations like the U.S. to address climate change was proof that an entirely new approach was needed, because people no longer truly cared about conserving nature. Eco-modernists are not hunters and fishermen, apparently—nor do they seem to know about the kinds of conservation triumphs that Madson has spent four decades writing about, and living, and celebrating at work and in the fields and on the rivers.

“The death of environmentalism?” he said. “The death of conservation? When so many of the worst problems we have are so easy to fix? When we’ve already accomplished so much, there were people actually writing that conservation is dead? It was eating me up, thinking about it. I couldn’t sleep. My wife was worried about me.”

So he went back to work. “One thing I did come to admit,” he said. “On the biggest conservation issues—clean water, climate change, public lands, the big challenges—we’re losing ground. We’re becoming satisfied when we lose less, and that is not going to work if we want hunting and fishing and wildlife to be around for the next hundred years.”

Madson and I both agreed that to know our own history is the first step to winning the conservation battles that we will face in the coming years. It is tempting to say that Aldo Leopold could not have imagined the challenges of the 21st century but that would be wrong; Leopold lived through the darkest days of American wildlife, when we had less than a third as many people in our nation as we do now, but had effectively wiped out almost all of our wildlife, and done so in record time. Leopold lived to see the turning of a conservation tide that he, more powerfully than any other single figure, helped to create.

With that in mind, I’d like to introduce everybody to his series on the history of American conservation, found at The Land Ethic, meticulously footnoted in case you want to delve even more deeply: Part One, Part Two, Part Three, and Part Four.

The time has come for American hunters and anglers, once again, to assume the responsibility of righting and strengthening the battleship of conservation, and setting sail for a new horizon. Chris Madson’s essays can be the fuel, the ammunition, for this new and exciting journey. See you out there.