Before we get into how the HMR shot, let us digress to the 6.5 Creedmoor so that you may better... 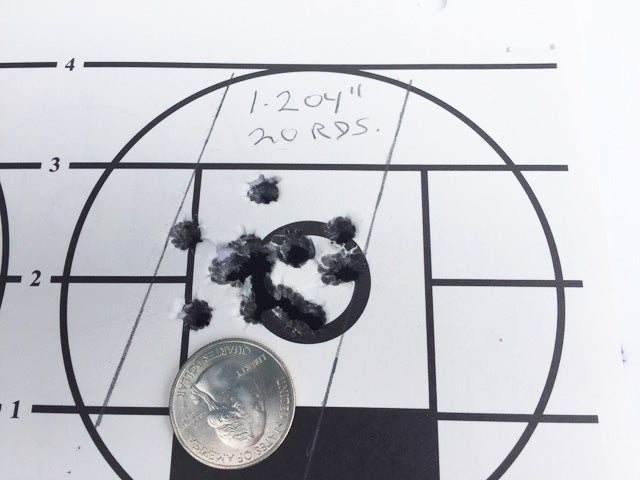 The author's 20-round group with the Bergara B-14 HMR. David E. Petzal
SHARE

Before we get into how the HMR shot, let us digress to the 6.5 Creedmoor so that you may better appreciate the rifle. The Creedmoor was designed by Hornady as a target cartridge and made its debut in 2008. It was created to take advantage of the spectacular qualities of 6.5mm (.264) bullets which, in the heavier weights of 140 grains and more, can pack ballistic coefficients of over .600, which is practically interplanetary.

Because these relatively light slugs stay supersonic (and therefore stable) so long, they are accurate way…out…there, despite their modest velocities of 2,600 to 2,700 fps. The 6.5 Creedmoor does just fine at 1,000 yards, and will pretty much match the much larger .300 Winchester Magnum.

Everything about the Creedmoor is scaled down: cartridge size, powder charge, recoil, muzzle blast, cost of ammo, cost of components. It’s easy to handload, and has no quirks, peculiarities, or vices. Target shooters took to it immediately, and it did just fine in that arena, but then hunters started catching on to the fact that here was a round that would drop game with dispatch, even a long way off, and would do it without rearranging the shooter’s cervical vertebrae.

At the 2017 SHOT Show, the Creedmoor took off. Everything was chambered for it. It’s so popular that I could not find a set of match-style dies when I was doing the shooting for this post. Never seen anything like it in all my born days.

The Bergara B-14 HMR. Bergara

The Bergara B-14 HMR. Bergara

And with that, let us get into how the HMR performed. The first thing I tried was Hornady ELD Match 140-grain factory ammo. The ELD bullet is super-streamlined and made with a polycarbonate tip that will not melt in flight and degrade the bullet’s trajectory. It was Hornady’s intent that the Match ammo be accurate, and priced low enough, that someone who didn’t handload could afford to enter a match with it and shoot well. My average for three five-shot groups was .824, which would certainly keep you in the black if you did your part.

Next I tried three hunting bullets: 140-grain Nosler Ballistic Tips went into .892. Nosler 140-grain Partitions scored .746. It may have occurred to you by now that for this bore diameter, I stick to 140-grains or heavier. It’s at that bullet weight that the cartridge does its best and most efficient work.

Now we come to the odd part. Back in the 1960s, Jack O’Connor got hold of some stray 170-grain .270 bullets, just a few, which he loaded and shot. They produced a one-hole group, back when you did not see one-hole groups from hunting rifles. Segue to last summer, when a fellow at the range was shooting up his remaining supply of 6.5×55 ammo, and offered me ten leftover 160-grain bullets of a length seldom seen on this earth. I hung onto them, and this seemed to be the time to shoot them, so I loaded them up and fired two five-shot groups that averaged .271, proving that history repeats itself, and that if a stranger offers you bullets, take them.

But the centerpiece of all this handloading was the Hornady ELD-X 143-grain bullet, which is accurate and aerodynamic (BC of .620) enough for target shooting and is designed to expand on game as well. That went into .502, average of four five-shot groups. So, if this were my rifle, this load is what I’d use to the exclusion of all else.

But the real test of the B-14 HMR was to shoot it under match conditions, which meant two sighters, and then 20 rounds for record, one shot every minute and 15 seconds, which is what you get when it’s for real. I used a Nightforce SHV 4X-14X scope set at the top power, and shot on a day with the air temperature at 36 degrees and no wind to speak of.

The 20 shots went into 1.204 inches. Seventeen of them grouped in .878. The three that strayed were caused not by wind, or by the rifle, but because I could not find a set of Forster match dies in 6.5 Creedmoor. What does this have to do with stray shots? Simple. Unless your bullets are seated perfectly concentric with the case, which in turn must chamber perfectly concentric with the bore, the slugs will hit the rifling at a very slight angle, and will wander in flight. At 100 yards, as in this case, it was .326-inch. In hunting, this makes no difference, but in target shooting, at 600 yards, it’s 2 inches, which can take you out of the 10-ring into the 9 ring.

Forster match dies line up the case perfectly, and support the bullet with a sliding collar so that it goes straight in the case every time, and you don’t get wandering projectiles. I hold Forster personally responsible for not making tens of thousands more Creedmoor match die sets than they did so that I could have gotten mine, and am still pretty bitter about the whole experience.

If you multiply 1.204 by 6, you get 7.224 inches, which is what a group like this would expand to at 600 yards. Since the 10-ring at that distance is 6 inches, you’d get at least 17 shots in there, with a chance for the last three as well. This assumes that you’ll shoot good. If you do shoot good, you can turn in a very respectable score with this rifle.

I’ve made all this sound matter of fact. If you’d like a better idea of what a spectacular shooter this rifle is, try 20 rounds with your own gun at 100 yards, one shot every minute and 15 seconds. I doubt your group will look like this one.

What an astounding rifle. Bergarausa.com