I took a course in college on Icelandic mythology, in which the end of the world is known as Ragnarök,... 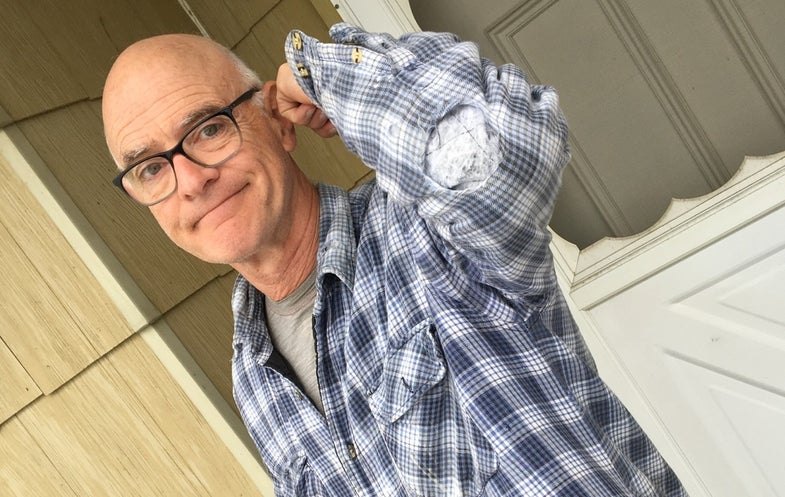 I took a course in college on Icelandic mythology, in which the end of the world is known as Ragnarök, literally “doom of the gods.” I remember it chiefly because of the metaphor cited in one of the ancient myths describing how everything is destroyed. It was “And the world shall be torn apart like an old garment.”

It’s one of those phrases that sticks in the mind. I thought of it because today I’m saying goodbye to an old friend, my blue plaid Randy shirt. People who have nothing better to do and read this blog will remember that Randy shirt is a term I coined denoting any inexpensive, polyester-lined, insulated cotton garment with sleeves for the upper body. Randy shirts are usually plaid and virtually always manufactured in someplace like Pakistan, Bangladesh, or Sri Lanka. They’re favored by tradesmen, country boys, and anyone who spends time outdoors and doesn’t mind getting their hands dirty. Including women. (The winner of the Randy Shirt Contest was a woman.) You won’t impress anybody by wearing one, but they’re a great example of form following function—cheap, warm, durable, versatile, and light. I have a number of others, but the blue one has always been my favorite. The longer I had it, the thinner the cotton outer layer became until the thing seemed to have a greater warmth-to-weight ratio than any garment I owned. I wore it to drag and butcher deer, hunt shed antlers, and clean the gutters. It was torn in many places, missing buttons, and the cuffs were almost worn through. I knew its days were numbered, but I still wore it.

What did it in was a circular hole in the left elbow that showed the gray polyester lining. I guess that elbow just couldn’t take it anymore. It looked like when squirrels eat holes in the paper of your attic insulation and the stuffing shows. I realized I couldn’t wear it in public without people thinking I was homeless.

Farewell, old pal. I hope to be as useful in my life as you were to me in yours.