The last couple of weeks have been prime time. With the rut in full swing, big bucks on their feet,... 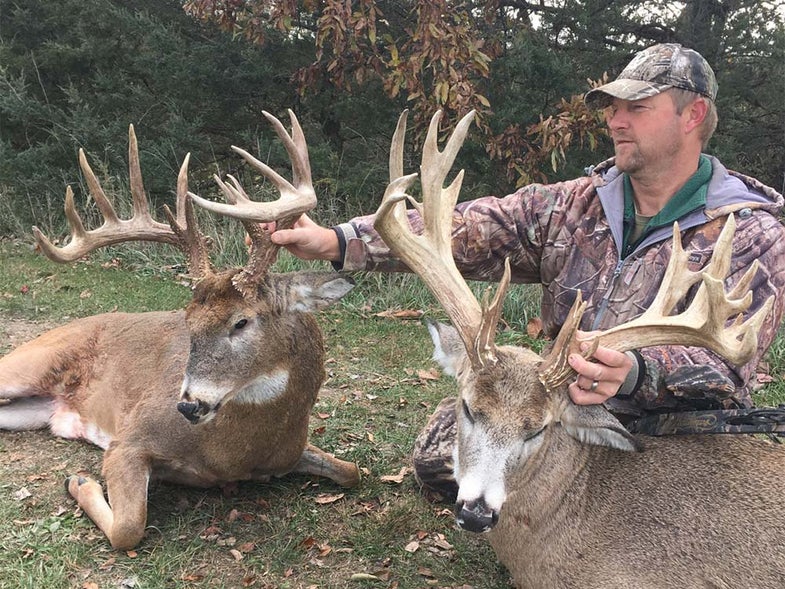 Daily Double: Snow took this 177-inch buck (left) and this 196-incher from the same stand, during the same sit!. Steve Snow
SHARE

The last couple of weeks have been prime time. With the rut in full swing, big bucks on their feet, and firearms season open in many of the top whitetail states, there have been a lot of happy hunters posing with tremendous trophies—and there should be plenty more coming in the days ahead. For now, here’s a sampling of the latest trophies to hit the F&S inbox.

Maine grows some big deer, but they don’t come easy. Deer densities are low, and it can take some serious work just to find a buck. According to the folks at the Burkettville General Store, Wendell Wentworth has it all figured out, as he drags in a dandy every fall. This buck weighed in at 268 pounds dressed and carries a wide, heavy rack.

Scott Phillips was hunting with Tim Clark’s Red Dog Outfitters when Clark asked him if he wanted a crack at a true monster. “I told Scott about this buck, but I also made it clear that he’d have to give me five days of total commitment,” Clark says. “No shooting smaller bucks, no asking to move to another spot. It was this buck or nothing, and I said if he didn’t want to do it, that was totally fine. He signed up, and on the last day of the hunt Scott was rewarded with a shot at this giant.”

Iowa hunter Steve Snow was on a mission to shoot the 13-point buck pictured on the left, above, when he went out for an evening hunt. “I had just crawled up into my stand, and my bow was still on the ground when I looked up to see him walking across the food plot 25 yards away,” Snow says. “As I watched him walk off after a doe, I pulled my bow up, disgusted with myself. An hour later I looked up and this big non-typical (on the right, above) that I’d been getting pictures of walks into the same plot, following some does. When he turned broadside I took the shot. I knew I’d hit him well but decided to wait until dark, then sneak out. While I was waiting, the 13-point walked back in and gave me a perfect shot. I took it and watched him pile up.” Snow put his landowner tag on one buck, and his statewide archery tag on the other.

Tom Sawyer lives in upstate New York but had made annual visits to the Midwest with his dad and uncle for years. “Then my Uncle Randy, who’s my dad’s twin brother, died just before last year’s bowhunt,” Sawyer says. “So Dad and I just didn’t feel up to it last fall; the three of us had always done everything together. But this year we were ready. We were hunting this new property in Missouri, and the activity seemed to all be happening on this remote section of the farm, where some CRP met a creek. I went back there and tucked in to a patch of willows, right on the ground. I rattled and had four small bucks trot right in and never see me, so I liked the setup. A while later, a big doe came out in the grass—and right behind her was this giant. I had one long shot at him but it was windy and I passed it. He was walking away when I rattled once, and he ignored it. Then I looked up to the sky and said, ‘Bring him in to me Uncle Randy.’ I hit the horns hard, and the buck spun around and walked right in for the shot. The biggest buck I’d shot before him was 140 inches, and I like to think my uncle had a big part of this special buck.”

Not much information on this buck, other than a name and a score. Nathan Johnston was hunting during southeast Minnesota’s shotgun season when he tagged a brute that carries mass from his bases to the end of his beams.

Cooper Soule is only 14, but this great buck is his third with archery gear. Soule grunted this beautiful Pennsylvania 8-point buck in, then used his PSE Rally— set at 48 pounds— to make a perfect double-lung shot.

Whitetail Properties agent Joe Gizdic left his Illinois home to hunt the Arkansas River in Kansas last week. “We had high winds like they always do in Kansas, but I found a nice funnel with a good scrape line running through it,” he says. “I’d hunted the same setup a couple evenings prior and knew it was a great spot; there was just tons of sign and lots of thick cover. So I came back for a morning hunt. I had a spike come through early, then this guy came in mid-morning working a scrape line. He’s a heavy, 5-1/2-year-old buck, and that third beam was 16-1/2 inches long.

Dave Nennig named this Iowa buck “Joker” a few years back. “When he was younger, he hung out with a buck we named ‘The Freak’ (read the Dec/Jan issue of F&S to hear the incredible story of that buck, which grossed in the mid 250s),” Nennig says. “The Joker was a pretty nocturnal buck for much of his life, but when he got older, he started moving around more in daylight. Going into the season he was the No. 2 buck on my hit list, and I was finally able to get a crack at him. He was 7-1/2 years old this fall.”

Dr. James Kroll has been a frequent guest of Kenn-Tenn Hunting co-owner Larry Porter's over the years. He returned for the state’s rifle opener and tagged this beautiful 10-point last week. “The buck was 6-1/2 years old and just an old warrior,” Porter said. “He was all scarred up from fighting, but still weighed 240 pounds.”

While it’s legal to bowhunt during Minnesota’s gun season, most guys put the bow on the shelf after the firearms opener. Not Melissa Koenen, who kept her Mission bow in her hands and just switched from regular camo to the blaze variety. Her perseverance was rewarded when this beautiful 8-point walked into bow range, and Koenen made a perfect shot.

Some monster bucks manage to escape recognition until someone puts a tag on them. Not this one, which Tim Phillips had nicknamed “The St. Paul Giant” and had hunted for four seasons. Phillips wasn’t the only one who knew about—and pursued— the buck, but he was the lucky one to tag the 39-point whopper non-typical.

Jeff Green had been hunting in Kansas with Wicked Outfitters for only three days when he shot the 160-class archery buck on the left. "Since he had several days of hunting left, he decided to buy a Missouri rifle tag and hunt a property we have there," says co-owner Whitney Fouts. "He shot a 140-inch 8-point to make it a double."

Continuing on the double theme, Charles Benoit was hunting in Irwin County, Georgia, when he caught a big 9-point slipping through the timber at 8 a.m. Benoit used his Browning .270 to drop the buck, then decided to enjoy the day and remain in his stand. At 1:42 p.m. a second shooter—this time a dandy 10-point—made the mistake of cruising past Benoit's setup. "I sent these photos in to show what a lot of luck and a little persistence can produce for a patient hunter," Benoit says.

Hunting public land in northeastern Missouri, Drew Harris dropped this super-tall 8-pointer on November 18th. He then dragged the buck to a creek, loaded it into his canoe, and paddled more than a mile back to his vehicle. That's hardcore.

I’ve heard widespread reports of lockdown in much of northern and Midwestern whitetail range within the last week, but there have been almost as many reports of big deer starting to move again. Iowa hunters are starting to see big deer on their feet, and a North Dakota friend saw five shooter bucks in a single morning’s sit last weekend. We are entering the pick-up breeding phase of the rut, which is a great time to kill a big one, as mature deer are the only ones with the stamina to keep after those few does coming into estrous late. With firearms seasons open in many states, any bucks hesitant to move for breeding may get encouragement from hunting pressure. I expect to get plenty more pictures of whoppers in my email in the days to come. In southern states like Alabama, pre-rut sign should be increasing, and my Texas friend Brent Johnson just sent me a pic of another Lone Star giant. Should be nothing but good times for Southern hunters in the weeks ahead.