The last week of October and the first few days of November—which around here, at least, I would call the... 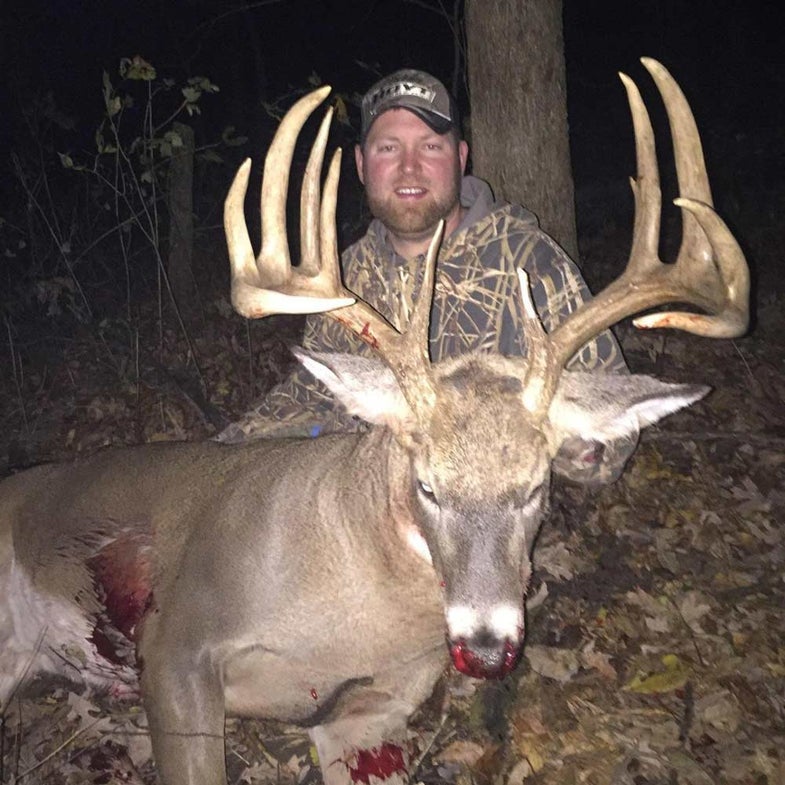 The last week of October and the first few days of November—which around here, at least, I would call the late pre-rut—is one of my favorite times to hunt whitetails, as big bucks start cruising hard to find those first willing mates. While I haven’t seen a whole lot of big-buck activity from stands lately, to be perfectly honest, every time I checked my email or text messages over the last week and a half, I’d get an eye-popping reminder of how good this period can be. As usual, the late pre-rut produced a bunch of great bucks. Here’s the proof. 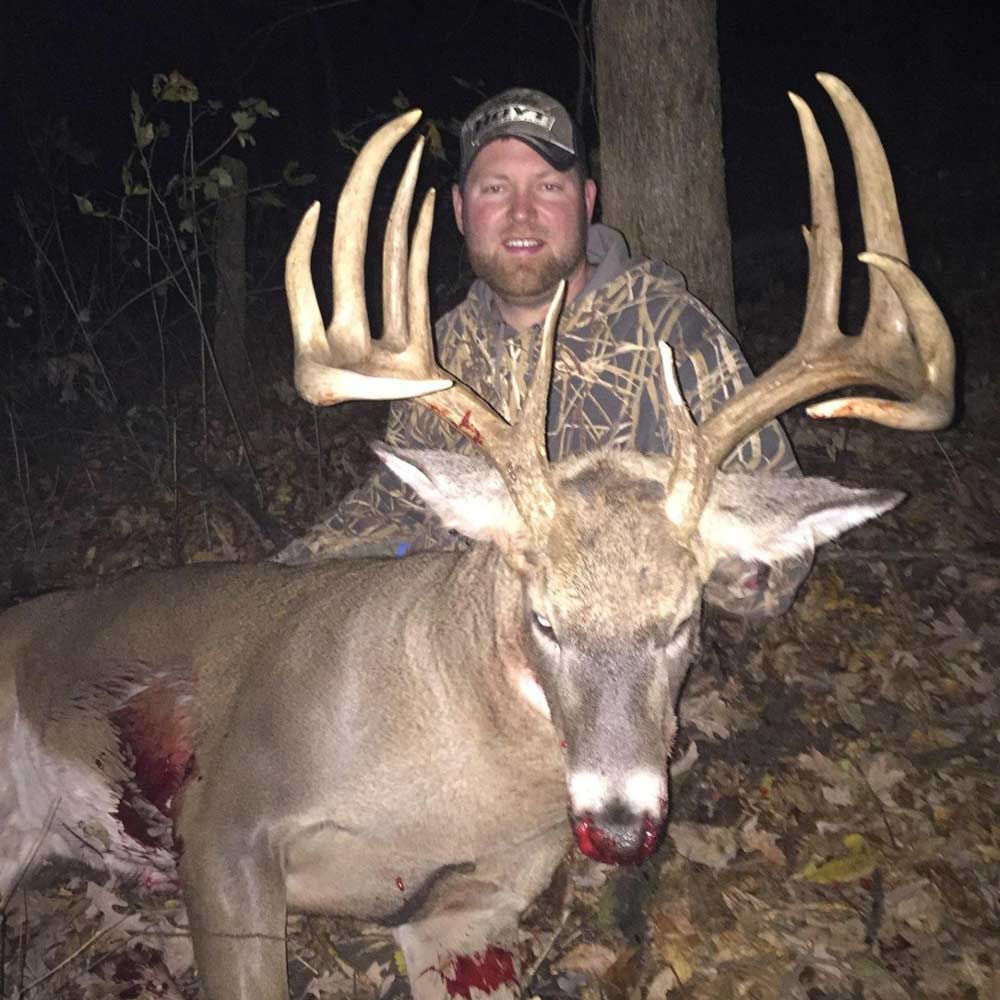 This is the third gross B&C buck taken in Wisconsin’s legendary Buffalo County that I know of this season. It’s also the biggest. Dylan Fluekiger had hundreds of pics and a matching set of sheds from this monstrous 6×5. Still waiting to hear hunt details because Dylan is busy hunting other states, trying to tag another giant. He did share the buck’s gross score of 182 even. 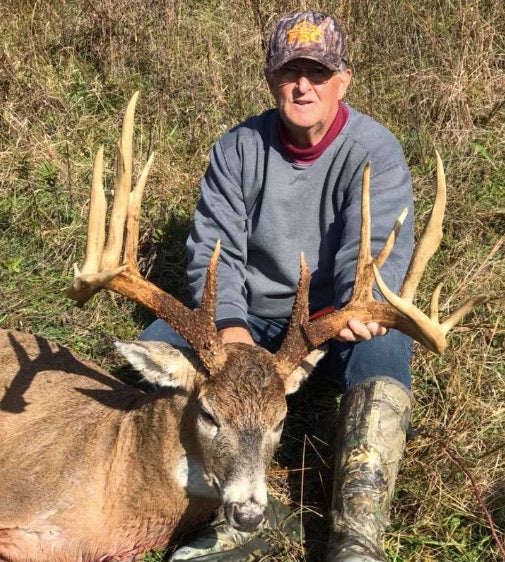 Crossbow Colossus: This giant-framed Ohio buck is said to go well over 200 inches.

We have reached out the granddaughter of this Ohio hunter after she posted this picture on Facebook in late October, saying her pawpaw had taken the buck of a lifetime. I’ll say. According to her post, this incredible crossbow buck grosses 211 even. We’ll bring you more info as soon as we have it. 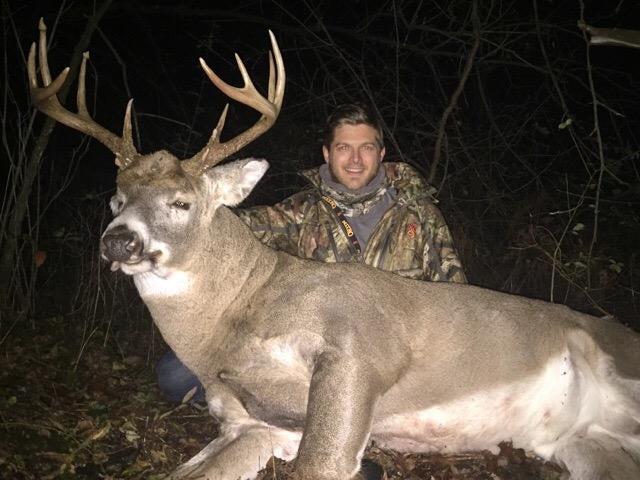 Logan Marum arrowed this huge-bodied 5-year-old buck, dubbed “Punkin’ Head,” on his family’s Wisconsin farm. Marum actually had a shot at another dandy buck the day before, but his bow blew up at the shot. “He had to drive to the archery shop the next morning and get his bow fixed so he could get in a stand the next day,” says Marum’s father, Ted. “Fortunately it all worked out when this buck came in. I don’t think Punkin’ Head had grown 10 inches of antler in the last two seasons, but he sure kept getting fatter. He was just a tank.” 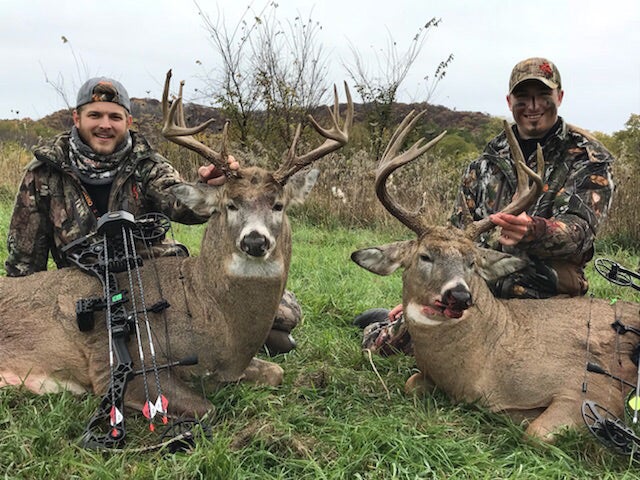 Hayden Krimmer (right) helps his buddy Logan Marum (left and above) with all the off-season deer work on the Marum farm. In return, Krimmer gets to bowhunt. He passed on several good deer before this heavy-horned 9-point wandered in to bow range. “He came by at noon with three other bucks, all trailing a doe,” Krimmer says. “It was my first hunt of the year on that farm, so it was pretty amazing, and special because Logan got his buck, too!” 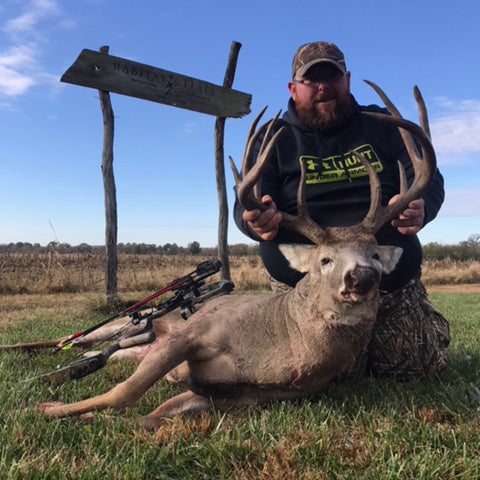 Arliss Reed is a full-time waterfowl guide at Habitat Flats, but he keeps his eye on deer, too. “We had pics of this buck in one area over the summer,” Reed says. “Then in the fall, nearly two miles away, I found about 40 rubs in a 200-yard stretch of creek-bottom willows. I set up a Double Bull blind, and the first evening I saw a pair of bucks, one that I’d have shot but he wasn’t in range. The next sit this guy came in. He’s an 11-point that grosses 168-6/8, and has a 13-inch G3. When I walked up to him, I realized I knew him from those summer pics.” 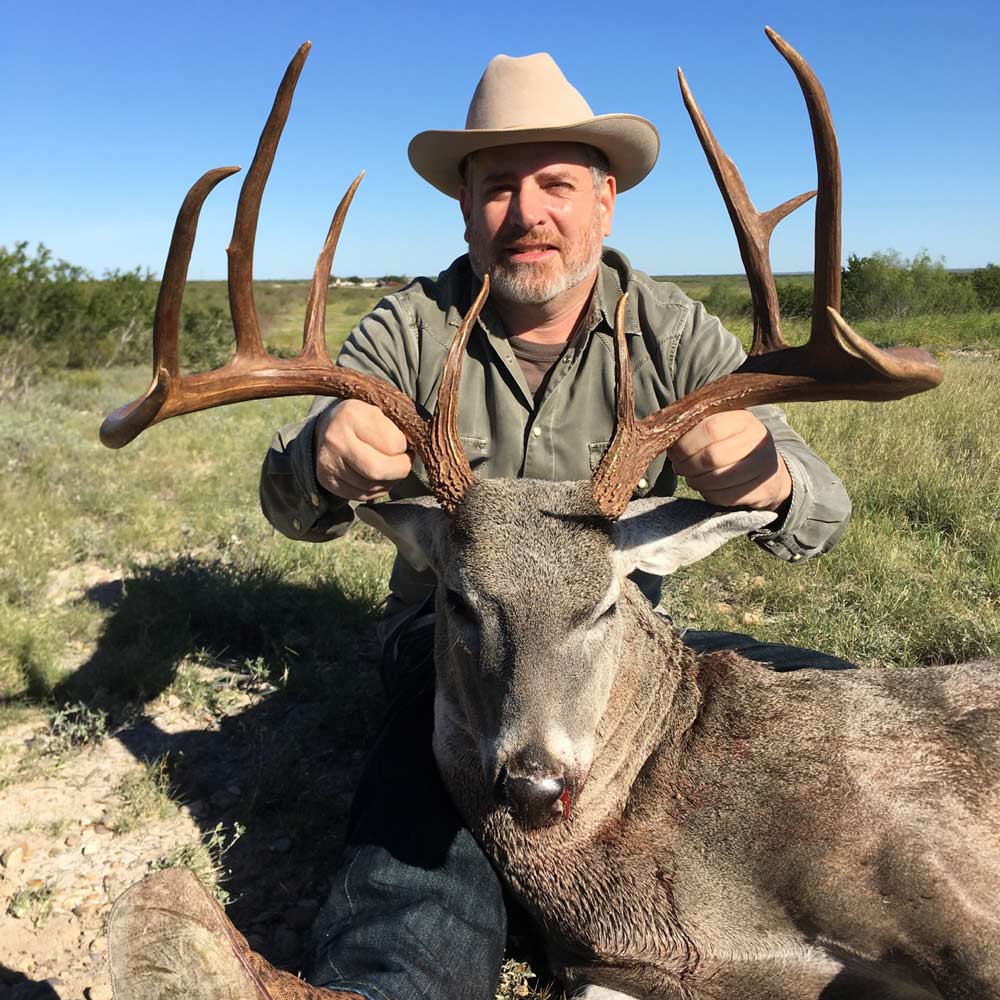 It’s pretty tough for a 9-point to crack the 170-inch barrier, but this fantastic Texas buck did just that, grossing 176-5/8. “Based on our experience with this deer, we think he’s 8 years old,” says ranch manager Brent Johnson. “Arturo owns this property, so it was awesome to see him reap the rewards. 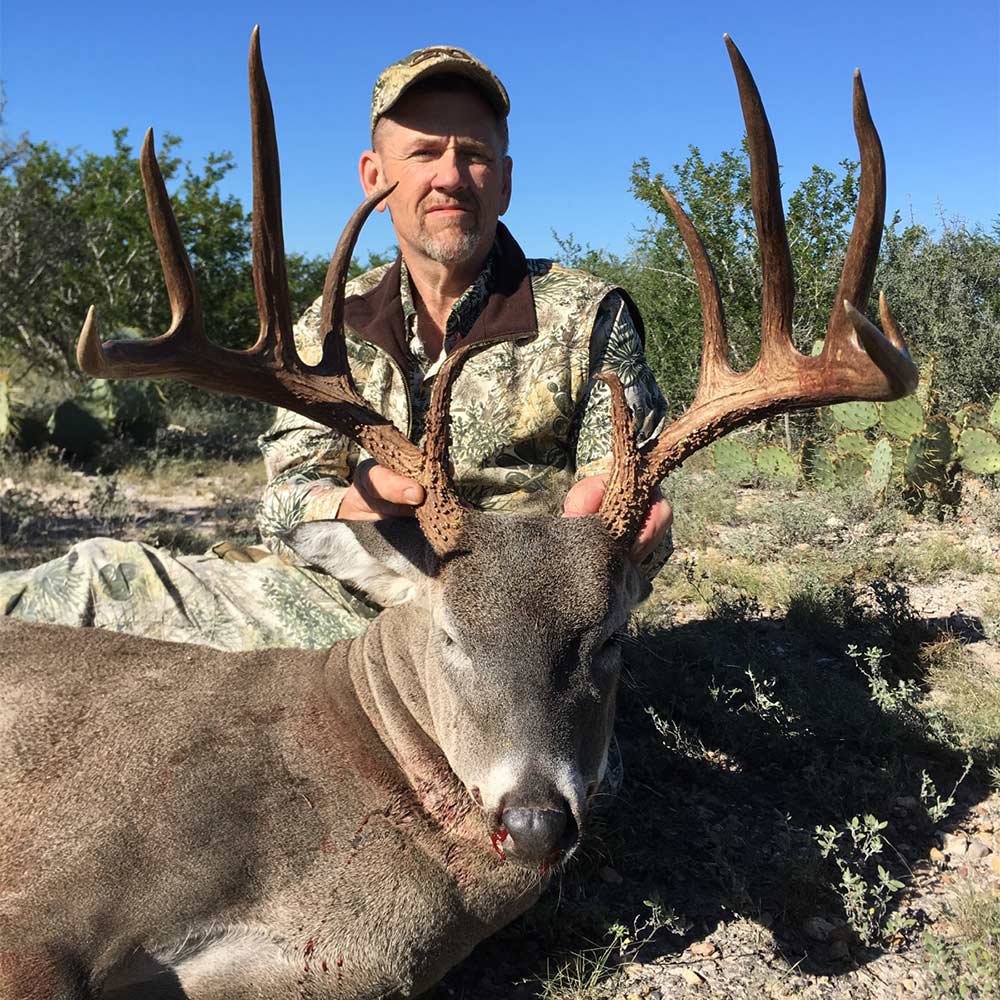 Bryan McComas helps Brent Johnson (above) manage and guide on the Benavides ranch in south Texas. When he got a chance to hunt for himself recently, he shot this 172-6/8” 11-point. “That buck was 7 years old,” Johnson says. “We set up in brush blinds close to bedding, because you never see these old deer in the regular setups until the rut kicks in.” 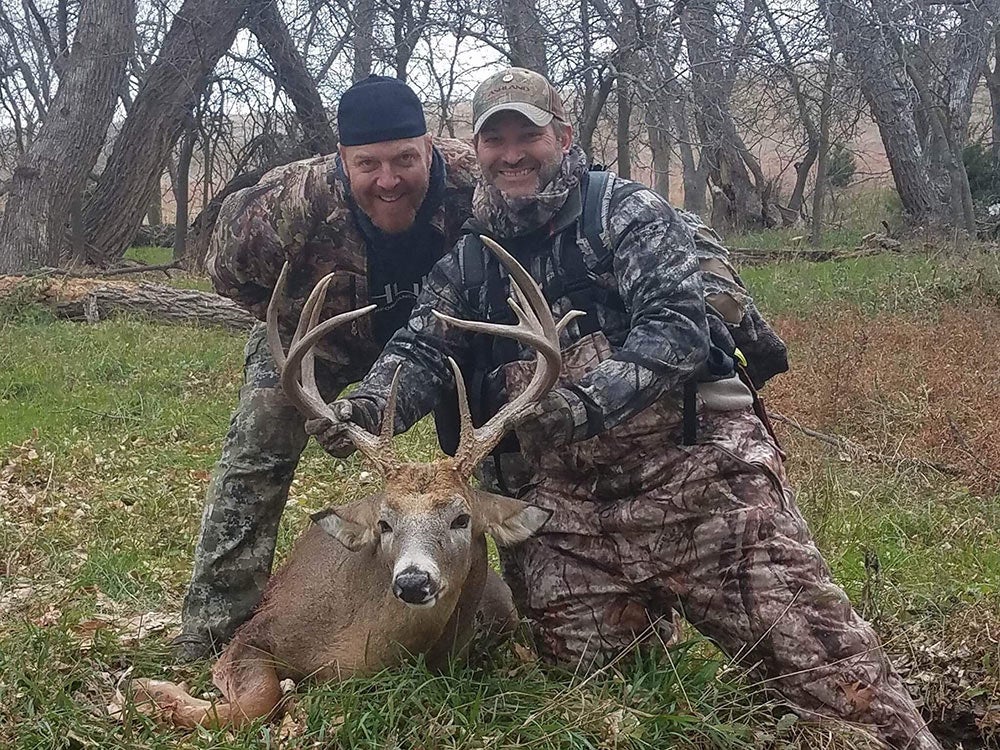 “We were only four minutes into legal shooting when this buck walked in,” says Red Dog Outfitters Tim Clark. “John saw the big body, glanced at the rack and saw that kicker point, and decided that was enough information. We were thrilled to walk up to that beautiful 11-point buck together! This is just one of several great bucks we’ve taken in the past week. All of a sudden, it’s going like gangbusters here.” 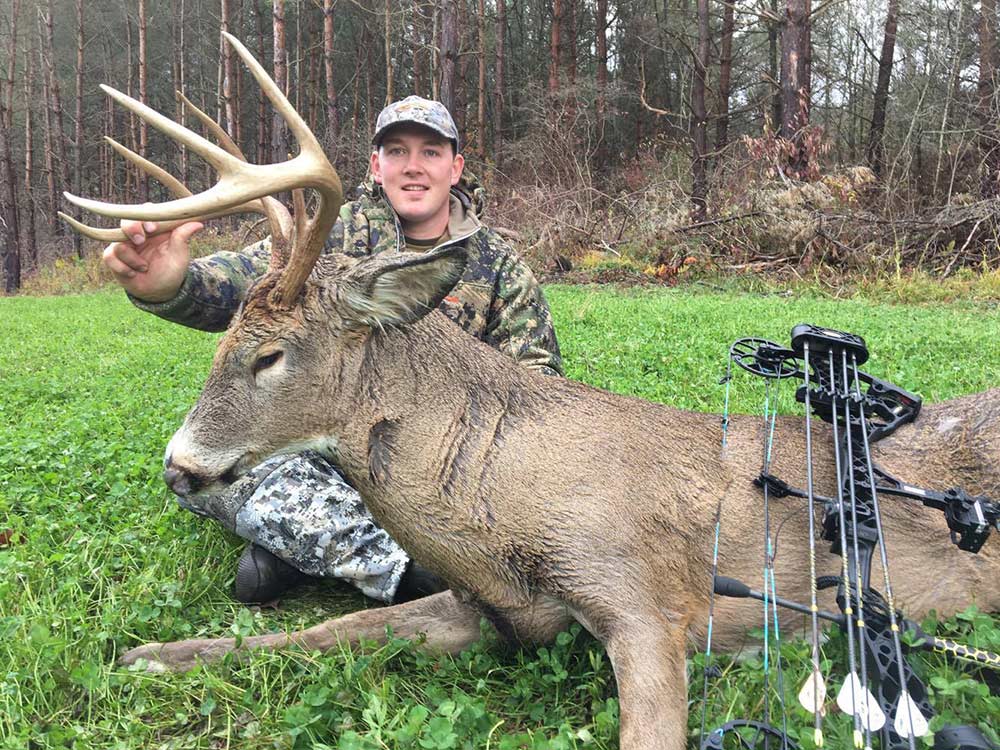 Evan Owens sent us this pic of his huge-bodied, perfect 8-point. “I shot this buck in Western New York,” Owens says. “He weighed 232 pounds on the hoof. I called him in from 100 yards in a clover plot, and he came on a dead run to 15 yards. It was one of the most memorable hunts I’ve had, and also the first buck I’ve killed on a property I bought three years ago and have put a lot of work into it.” 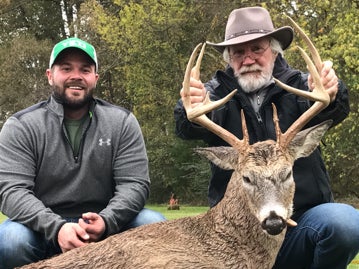 Hats off to Taylor Cavin, who at age 67 took his first whitetail buck ever, a tall 9-pointer, while hunting with Kenn-Tenn Hunting. “He was pretty excited, and it just got better when his son Tyler shot a buck the next day,” says Kenn-Tenn co-owner Larry Porter. 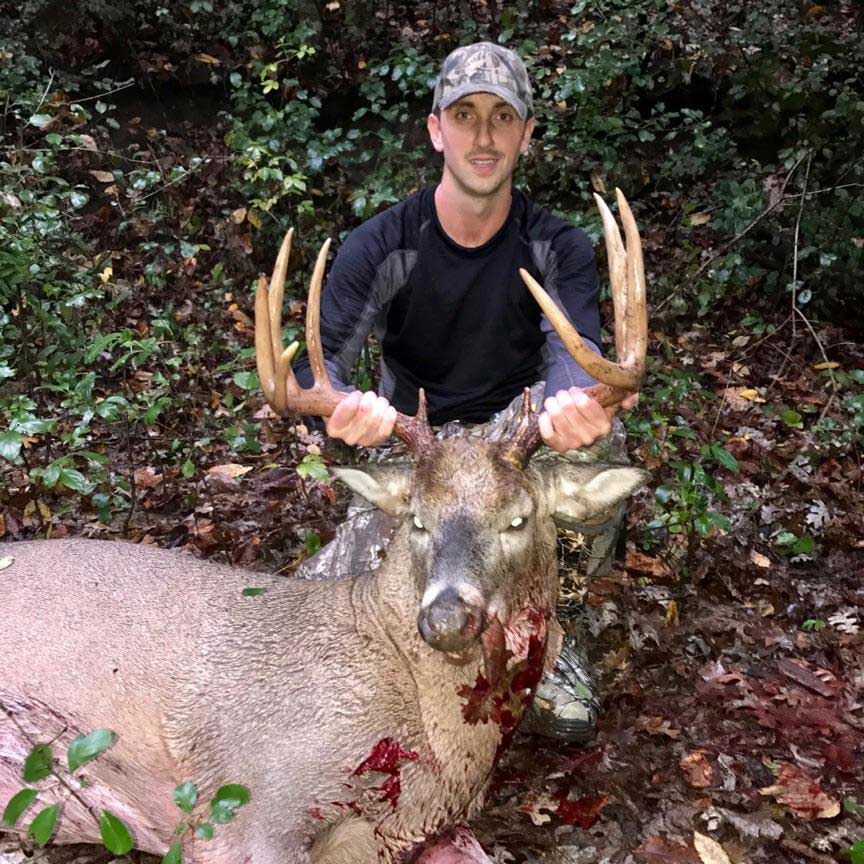 Dylan MacGaheran was hunting a food plot between a wood line and a standing cornfield when this monster-bodied 9-point walked out. “I’d barely settled in the stand when he just slipped out of the woods, already in bow range,” he says. “It looked like he was going to walk right into the corn, but he finally turned and gave me a perfect shot. He ran 150 yards down a steep hill and fell over. His body was so big we had to quarter him to get him out of there! He was the first deer I’ve ever shot an arrow at, so I’m pretty excited!”

As I write this, the very best hunting of the rut is either in full swing or just a few days away in much of the country. My contacts in the Plains states tell me that bucks are already going bonkers there, and here in the upper Midwest I’m hearing lots of reports of big bucks beginning to move all day long, with lots of cruising and some chasing. Same goes for much of the mid-South. In other words, you need to be in the woods this week, and if you can handle an all-day sit, now’s the time. In Field & Stream’s annual Best Days of the Rut feature story, I picked this Friday, November 10, as the Best Day of the Year—a perfect excuse for a personal day and a long weekend.