By the calendar, we are in the heart of the so-called October Lull. Many whitetail hunters skip this part of... 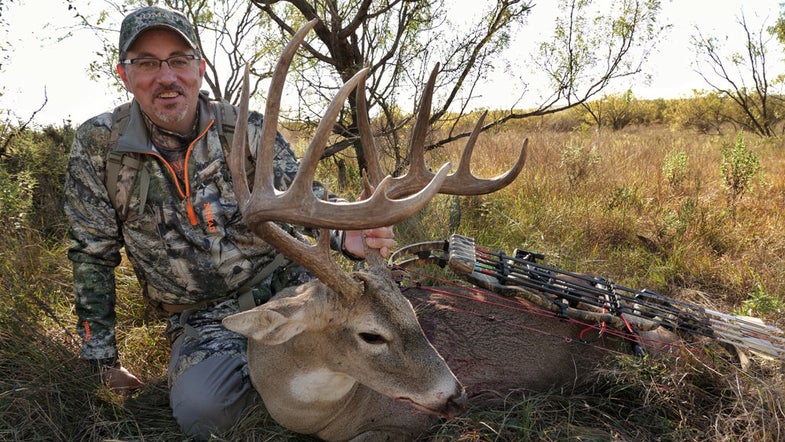 By the calendar, we are in the heart of the so-called October Lull. Many whitetail hunters skip this part of October, and wait a week or two when “things get good,” as this month morphs into November. Add to that the insanely warm weather many of us have been bemoaning, and a lot of hunters just haven’t bothered to hit the woods yet. But not the diehards below. They not only kept their heads in the game, they tagged some fantastic whitetails. 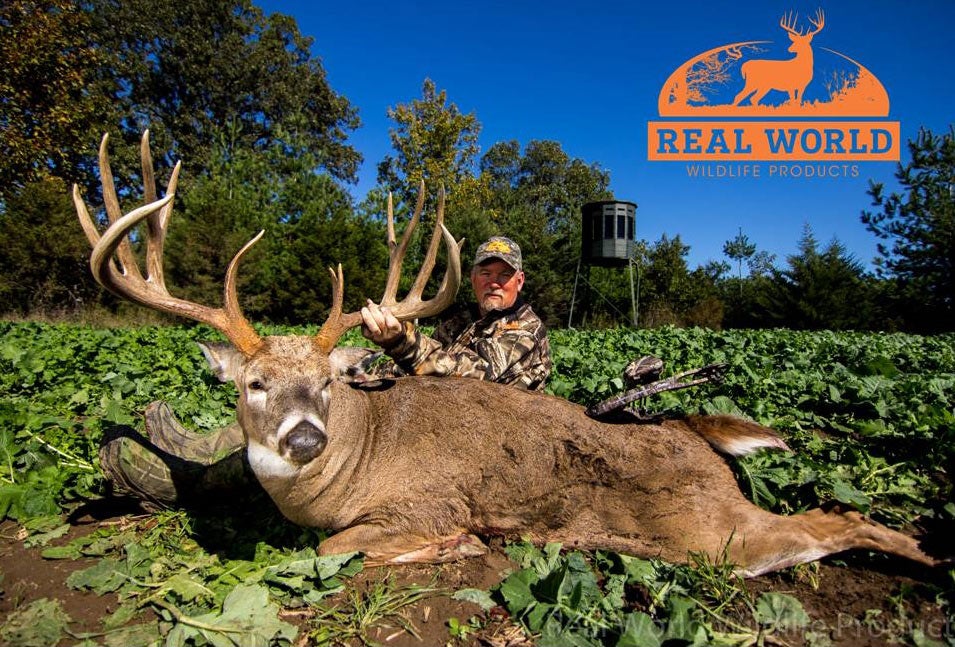 Don Higgins, co-owner of Real World Wildlife Products, passed this incredible buck as a 4-1/2-year-old last fall. In the spring, he found the deer’s sheds, which (assuming an 18-inch spread) measured 180 inches. “I really felt he had the potential to go 200 inches with another year.” Turned out, he was right. 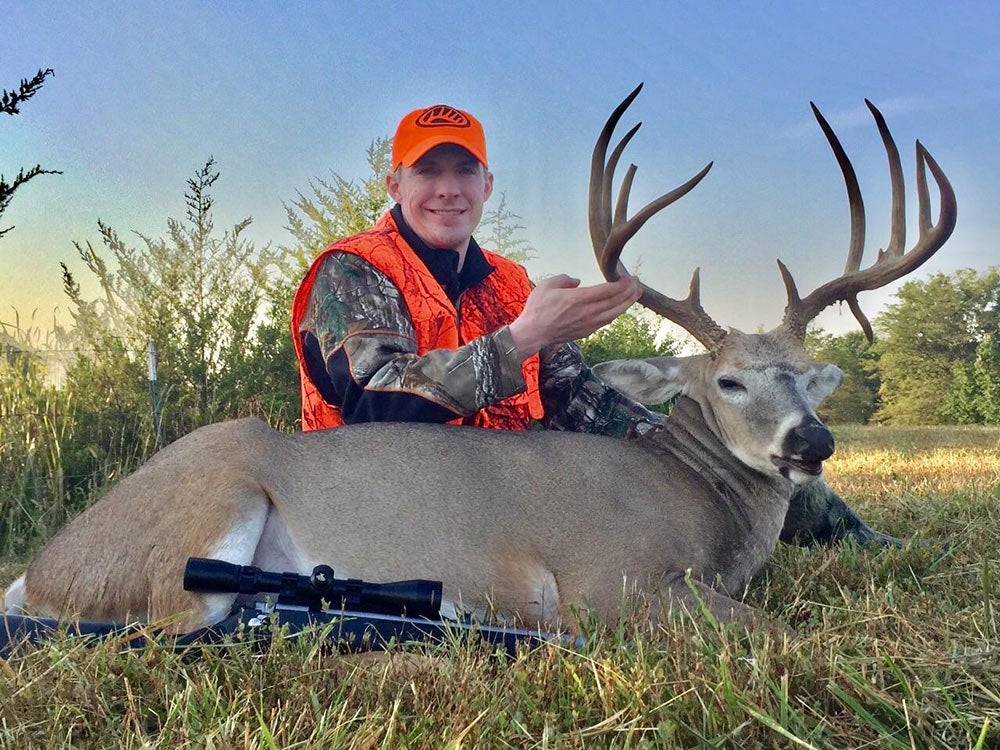 On the last day of five-day Kansas hunt, Whitetail Properties agent Kyle Herr decided to go for broke. “This buck was the only one I wanted to shoot,” Herr says. “He was bedding in a river bottom and feeding in a huge bean field in the afternoon. But in four afternoon hunts, I just couldn’t get within range. So, on the last day I just decided to risk bumping him and snuck into the river bottom in the morning. It paid off, as the buck gave me a 50-yard shot when he returned to bed.” 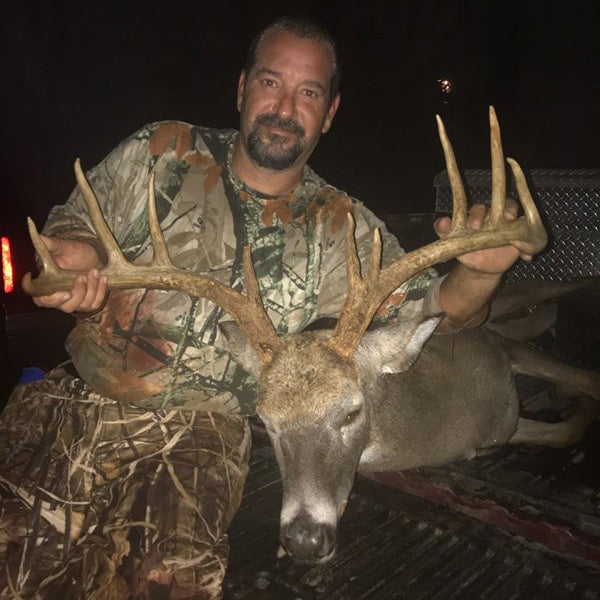 The Hoosier State flies under the radar of a lot of big-buck nuts, but whitetails like this are changing that. Chris Daniels’ 12-point sports a nice forked brow and an inside spread of 24-1/2 inches. 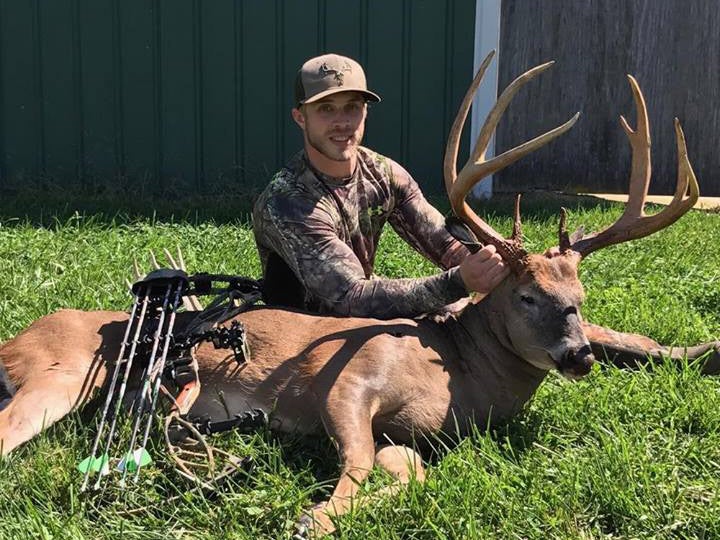 Any 8-point that grosses over 150 inches is a giant in my book. Jimmy Bonski’s buck soars well above that, grossing 167-3/4. The 5-1/2-year-old buck has tremendous height and some awesome kicker points. 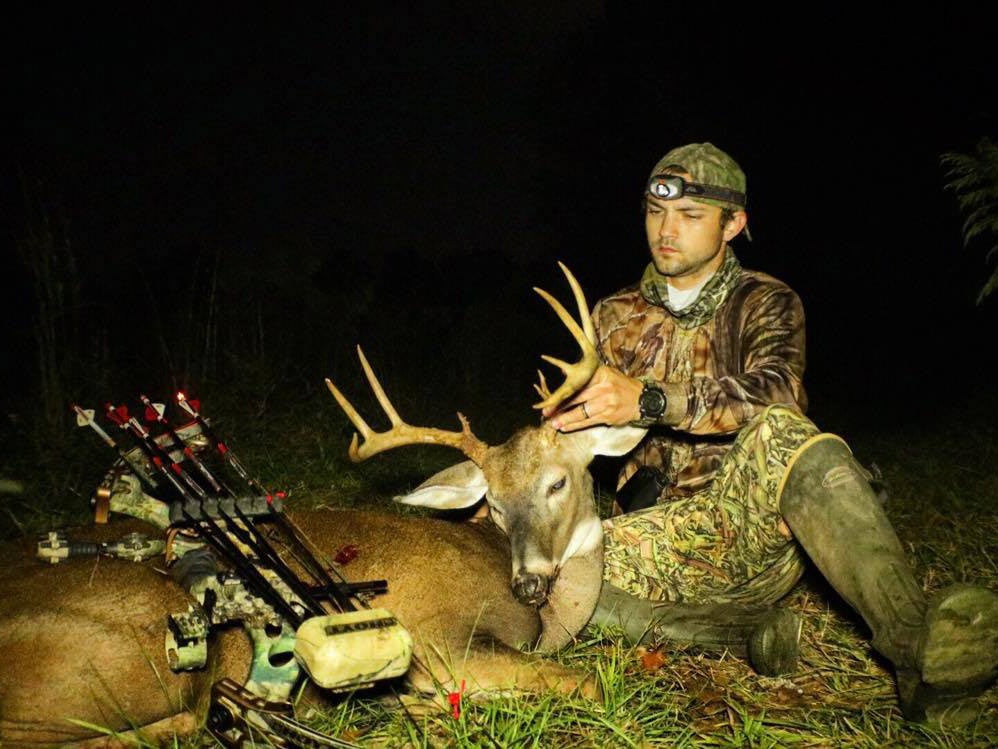 Way to Go: Smathers tagged this Mississippi 9-point by changing up how he accessed his stand.

Land Smathers got on to this Mississippi 9-point early in the season, but waited for weeks to get the right wind conditions to make his move. “I didn’t see him on the first two hunts, so the third time I tried accessing my stand from the opposite end of the property,” he says. “That hunt he did exactly what I expected, and I got my shot. After blood-trailing and finding him, I realized he’d been bedding about 50 yards from where I’d parked on the first two hunts. That buck had been watching me walk right to his food source. He taught me that proper access is everything.” 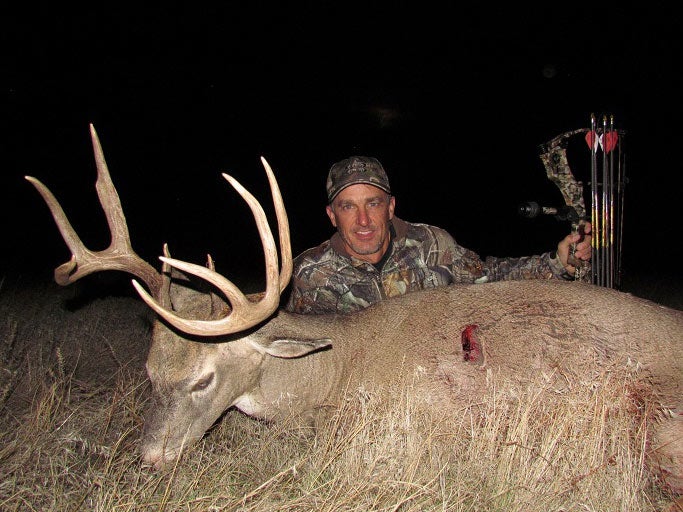 Tall Boy: Kimnach with a tank of a 9-pointer.

Montana Whitetails owner Keith Miller says his hunters have had more shot opportunities so far this season than in any he can remember, and the best weeks are yet to come. While much of the country has been in a warm spell of late, his part of the Big Sky state has seen snow already. One of Miller’s successful clients this week was Gary Kimnach, who arrowed this tall-racked, big-bodied 9-point on an evening hunt. 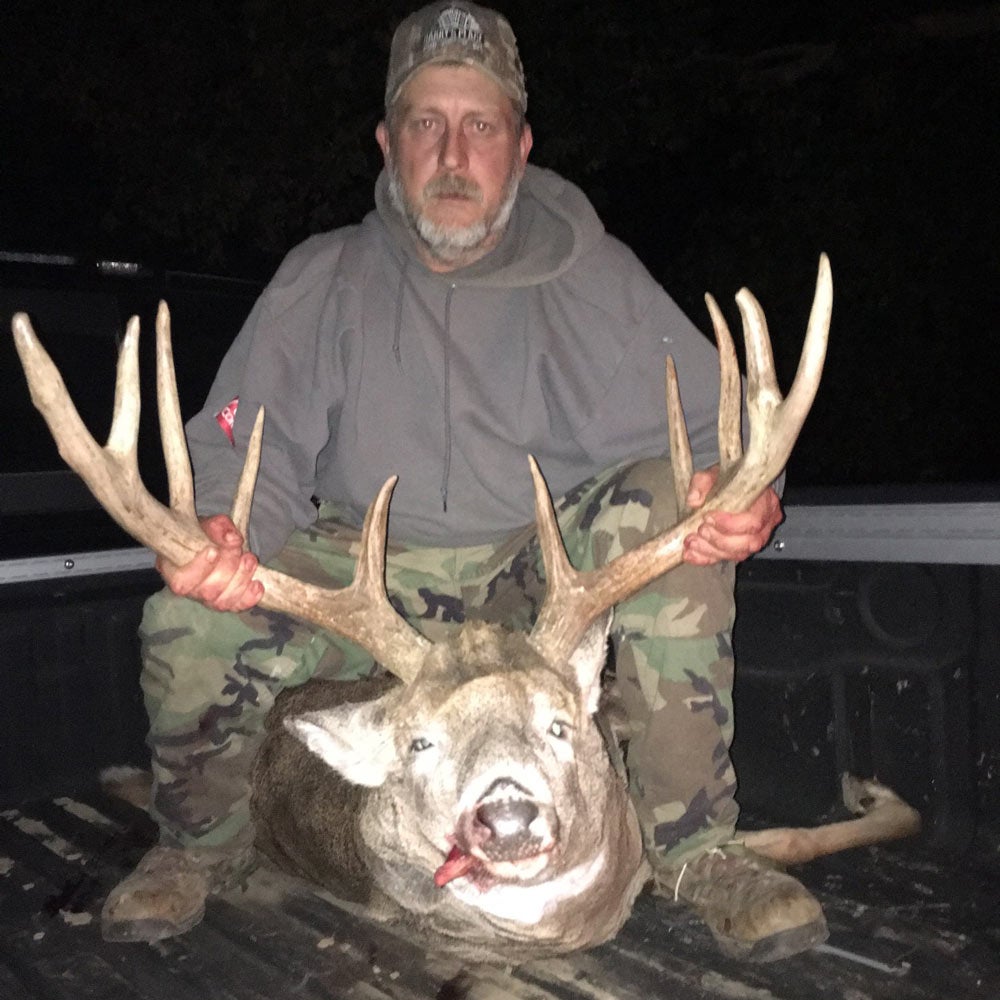 Wisconsin bowhunter Travis Althoff spotted this wide, massive 10-point two weeks ago on an afternoon hunt. “I watched this buck on the opposite of the field I was hunting,” he says. “He was feeding, but also dogging a doe some. So I went over there to scout a few days later, and found a bunch of scrapes, some huge rubs, and big tracks. I figured I’d better hunt him before the rut took him somewhere else. I got a stand in there, and shot him on the first sit; he was 25 yards behind a doe and followed her right in. ” 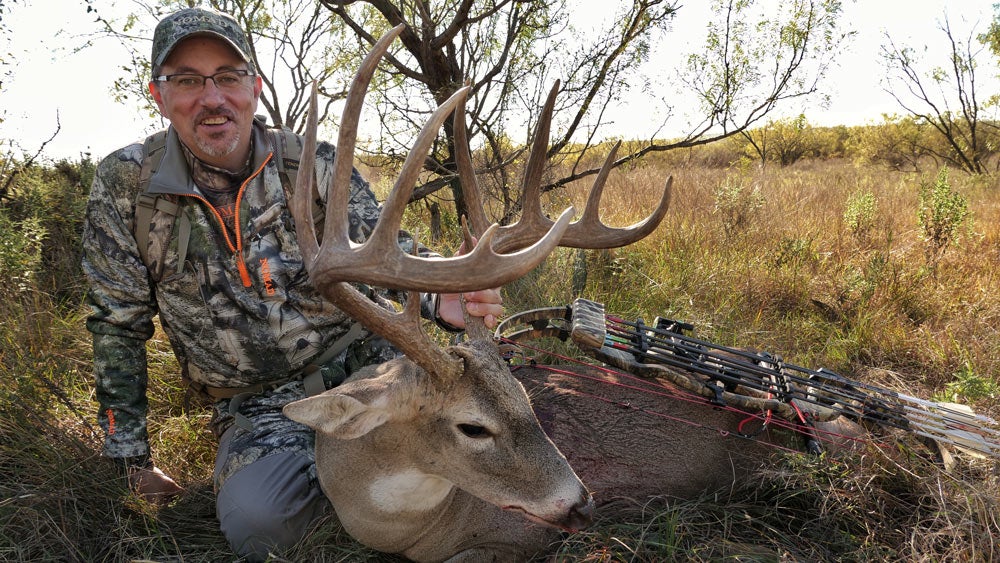 Yes, Mark Drury is on our list again—for the third straight time. Drury heads to Texas each October for a bowhunt. He started getting pics of this beautiful 10-point in 2015. “I hunted him that year and last fall, but I never laid eyes on him,” Drury says. “This fall I was scheduled to fly back home late in the week, but I saw there was a cool front and high pressure heading in for the weekend, and I thought, If I’m going to have a chance at this buck I better stay. So I stayed. And I’m glad I did.” 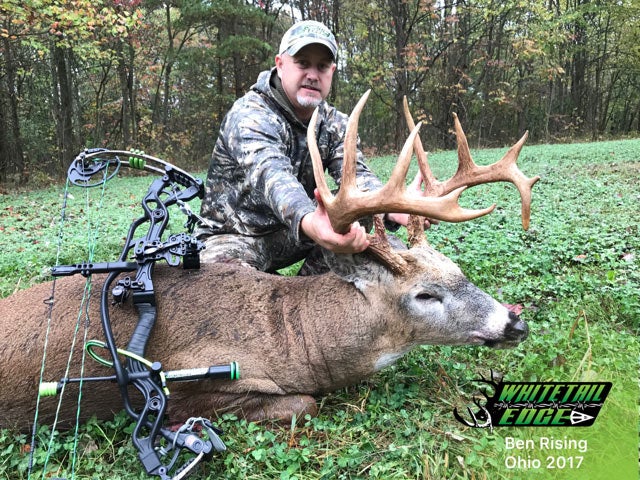 Ben Rising (whitetailedge.com) nicknamed this Ohio buck “On Time” because of the deer’s set-your-watch predictability on summer feed patterns. “He wasn’t quite that easy when fall came around, but he was still pretty faithful to an 80-acre area that had all the food and habitat he needed,” Rising said. “He was 6-1/2 years old this fall, and I decided it was time to take a shot at him.” The buck fed slightly out of range on Rising’s first sit, was a no-show on the second, then showed up within bow range of a ground blind. “I’ve shot bigger bucks, but this deer was a trophy because of his age.” 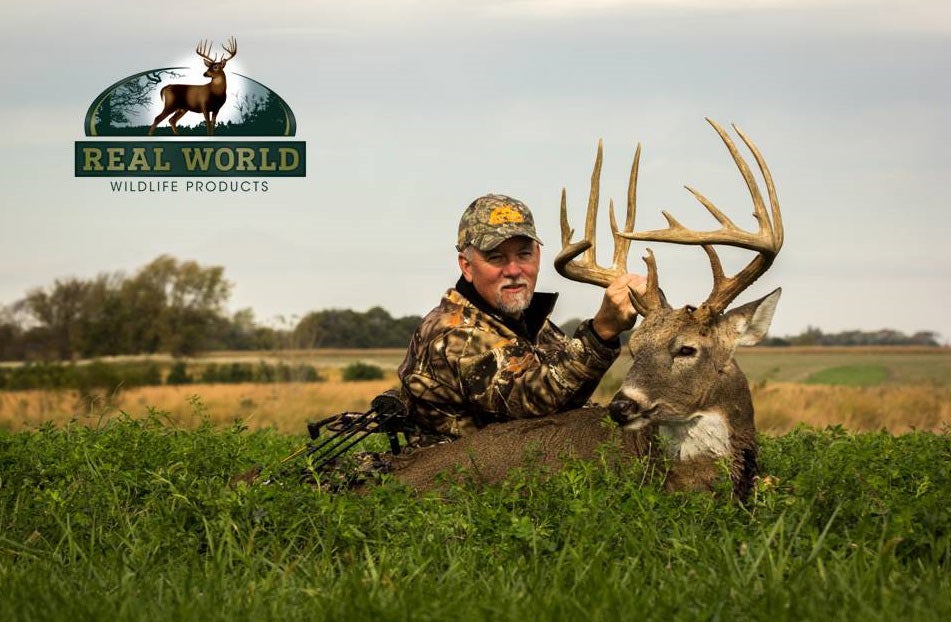 Dejavu: Higgins with his second Prairie State giant in the same week (Illinois has a two-buck limit).

Yes, the same Don Higgins (see above). Three days after he tagged the buck that opens this gallery, Higgins jumped into a different stand and shot this amazing 190-class bruiser—a buck he called “Trump” and knew well through sightings and trail-cam pics. No word from Higgins if he’s out buying lottery tickets as we speak…but he should be. 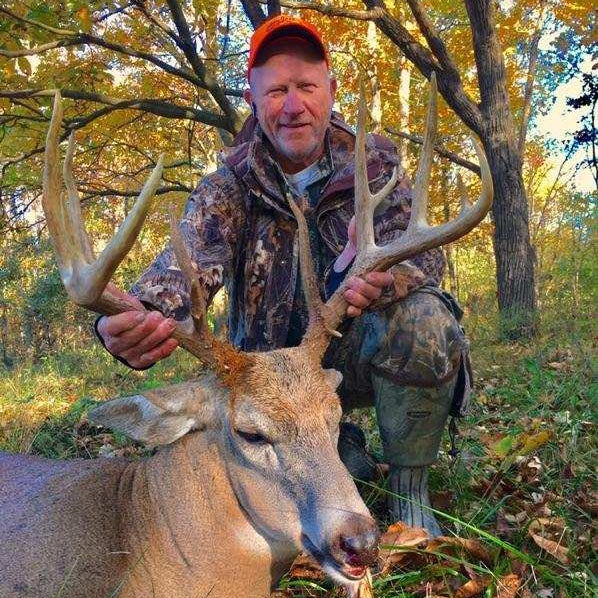 Surf the B&C record books a while and you’ll learn that America’s Number One hotspot for killing Booner bucks lies on Wisconsin’s western border. The scenic bluffs of Buffalo County flank the Mississippi River and consistently cough up more giants than any county in the country. Veteran bowhunter Stuart Hagen grew up there and shot this beautiful 10-point on his farm last week, adding yet another Booner to the books. 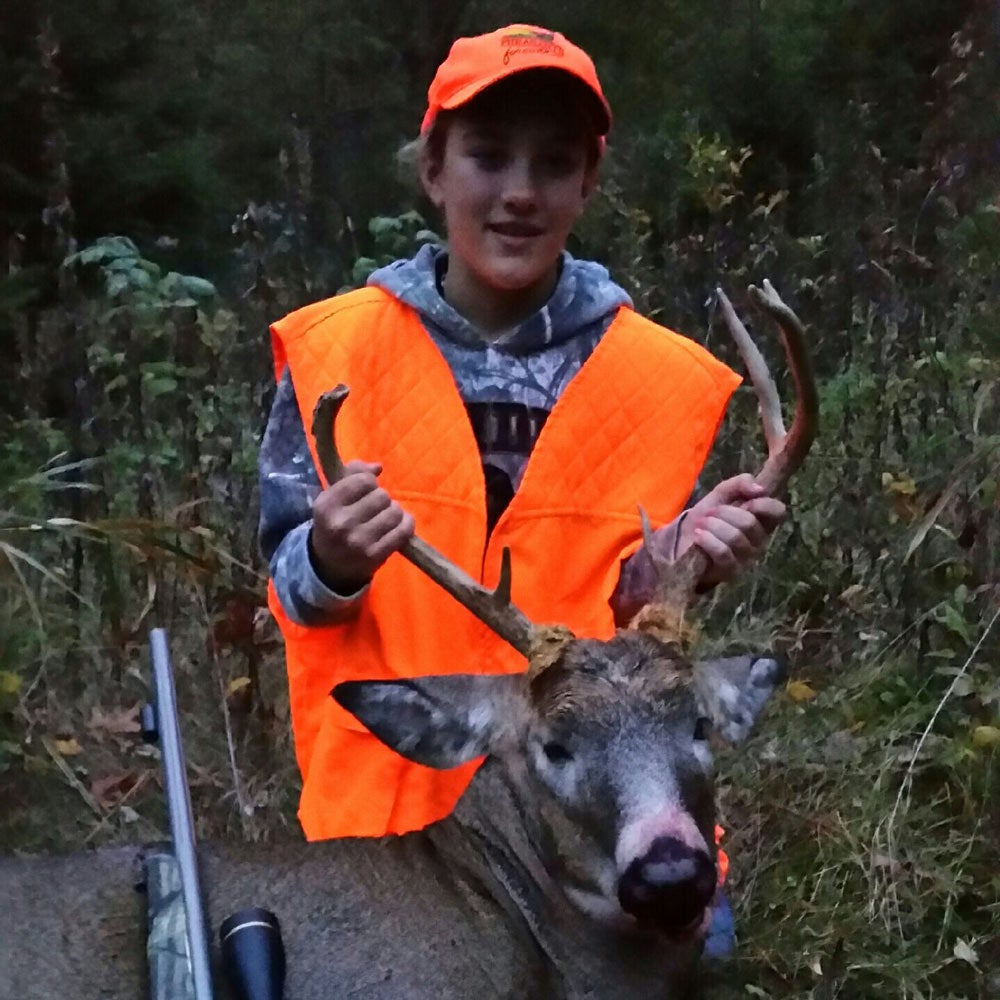 Minnesota’s annual youth deer hunt coincides with an October weekend when the state’s school kids get a four-day break from school. Megan Greden celebrated the vacation by using a .50 caliber muzzleloader to take this tall-racked six-point while hunting with her dad, Ross.