We’re on the backside of the rut in most areas, but pickup breeding has kept some truly big whitetails on... 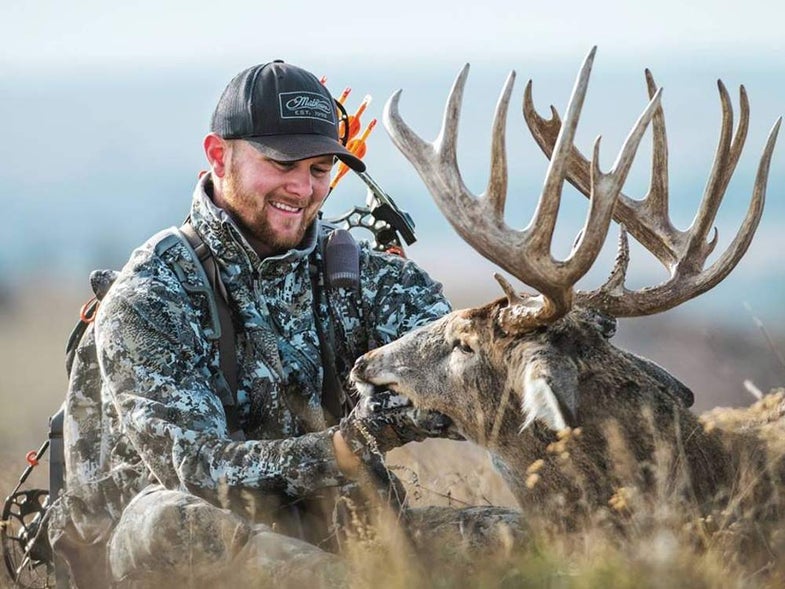 We’re on the backside of the rut in most areas, but pickup breeding has kept some truly big whitetails on the move. Add the pressure of firearms hunting—which was a factor for most places during the week of Thanksgiving—and I’ve seen some dandy bucks in my emails lately. Here’s a look at some of the best of them. 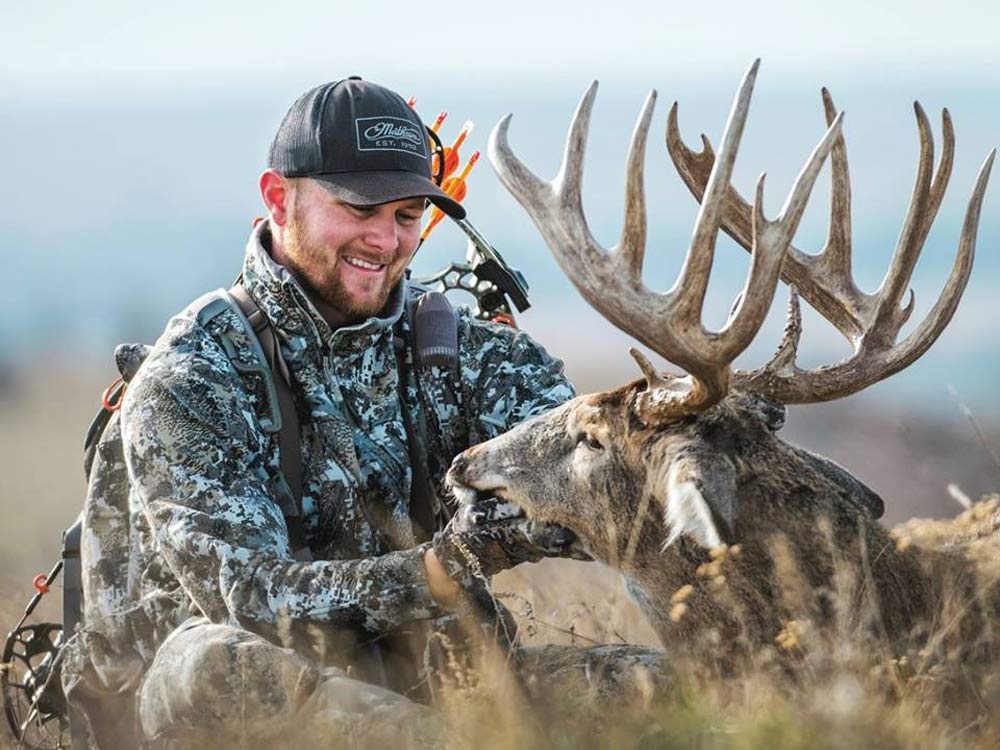 Dustin Lutt, co-owner of Rockhouse Motion, named this deer “Picket” when he got his first trail-cam pictures of the giant Kansas buck back in September of last year. After two years of hunting and strategizing, he finally connected with his dream 200-incher on the morning of November 27th. 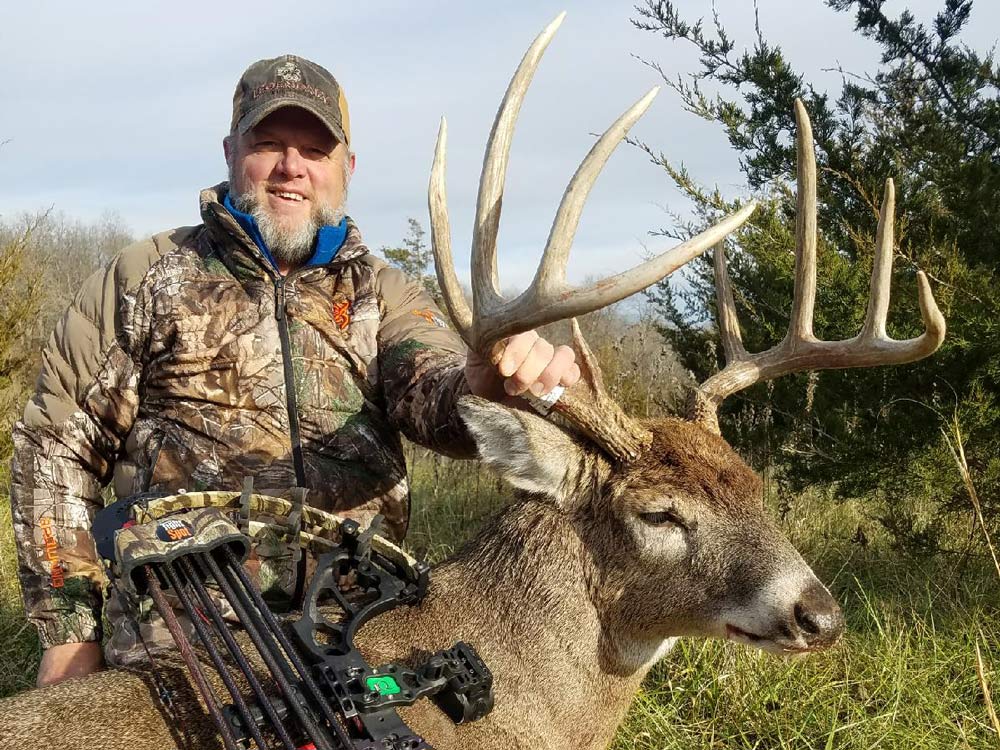 Tall Boy: Marum and “The Priest,” a big 10-point that lived near a country church.

Marum had nicknamed this buck “The Priest” because it hung out near a country church in southern Iowa. But the buck wasn’t acting particularly chaste the morning Marum shot him. “He was running does all over,” Marum says. “They were all stacked in a thick draw. I could hear them in there, and I’d catch an occasional glimpse of a deer. Finally, a couple of does popped out and headed my way. When I saw this buck follow them out, I recognized him right away.” The buck stopped in an opening 32 yards out, and Marum made a perfect shot. 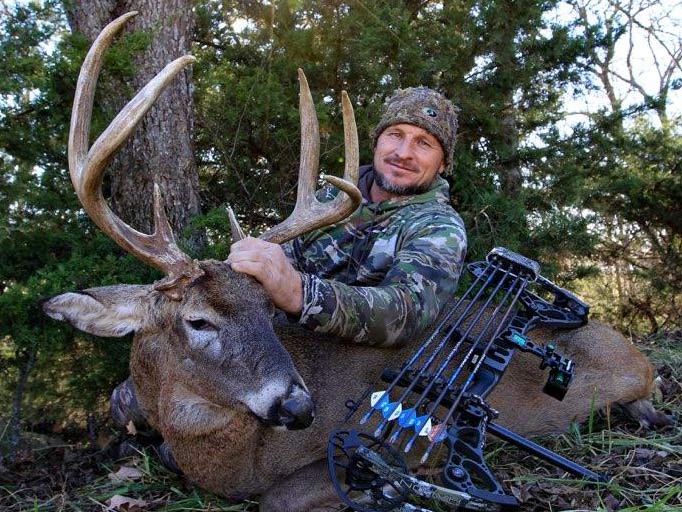 J.P. Boone is a full-time whitetail guide, so he doesn’t get many chances to hunt. But on a rare day without clients at Kansas’ Wicked Outfitters, Boone climbed in a tree, hoping for a crack at a buck he called “Captain Hook.” With 15 minutes of shooting light left a giant buck followed a smaller one into easy bow range. “I knew it wasn’t Hook, but there was no doubt he was a shooter,” Boone says. “I made the 16-yard shot, he went 40 yards, and it was over. I guess I’d rather be lucky than good.” Boone’s buck was 7-1/2 years old and dressed 300 pounds. 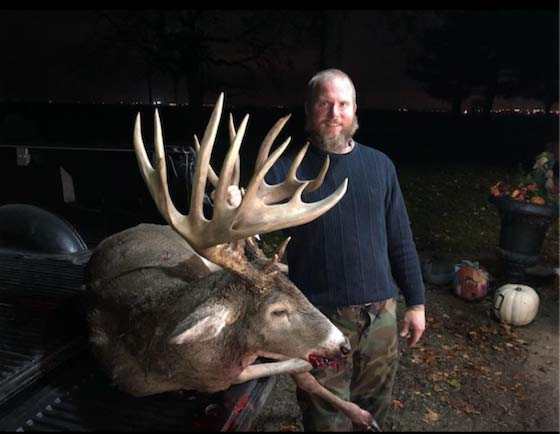 OK, this worked earlier in the year on an anonymous Kansas buck, so we’ll try it again with an Illinois version: We don’t know who the happy hunter is in this picture, but if it’s you or you know who it is, please let us know. The only details we have on this buck is that it was killed in Kankakee County. 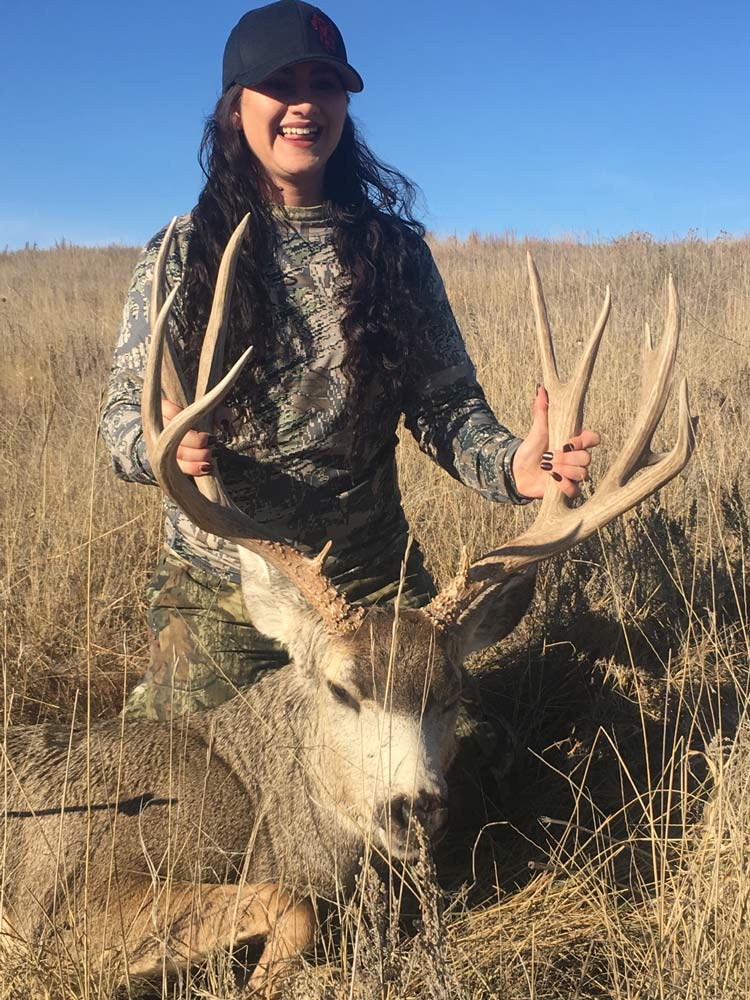 Kansas flies under the radar of a lot of muley nuts, but the Sunflower State can cough up some dandies. Katelin Silovsky is just 21 years old, but she knows just what those Prairie State counties can produce. She and her dad annually hunt with Tim Clark’s Red Dog Outfitters and last week Katelin slipped to within 24 yards of this 180-class buck and made a killing shot with her bow. 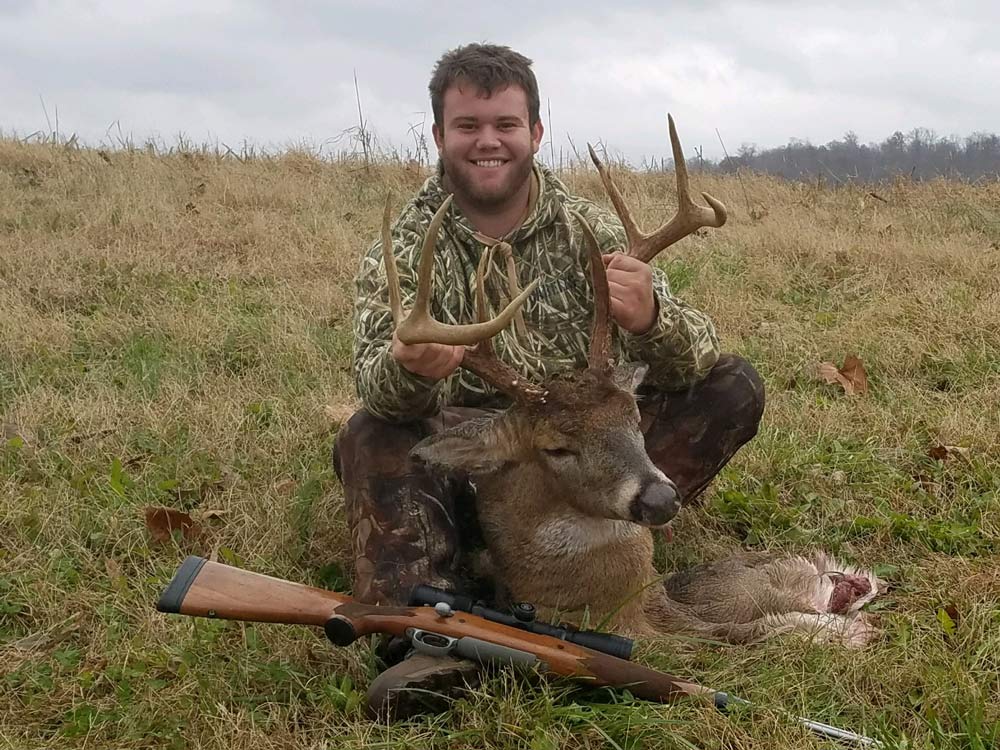 Bedroom Ambush: Reynolds took advantage of a 30-mph wind to sneak into this buck’s bedding area.

Hunt Reynolds is only 19 years old, but I’ve known him since he was a middle-school kid obsessed with hunting. Hunt slipped into a bedding area on the opening day of Indiana’s gun season. “It was a windy morning, so I decided to get aggressive and get right into a bedding area,” he says. “I was just leaning against a tree when this buck chased four does right into me. I dropped him at 55 yards.” 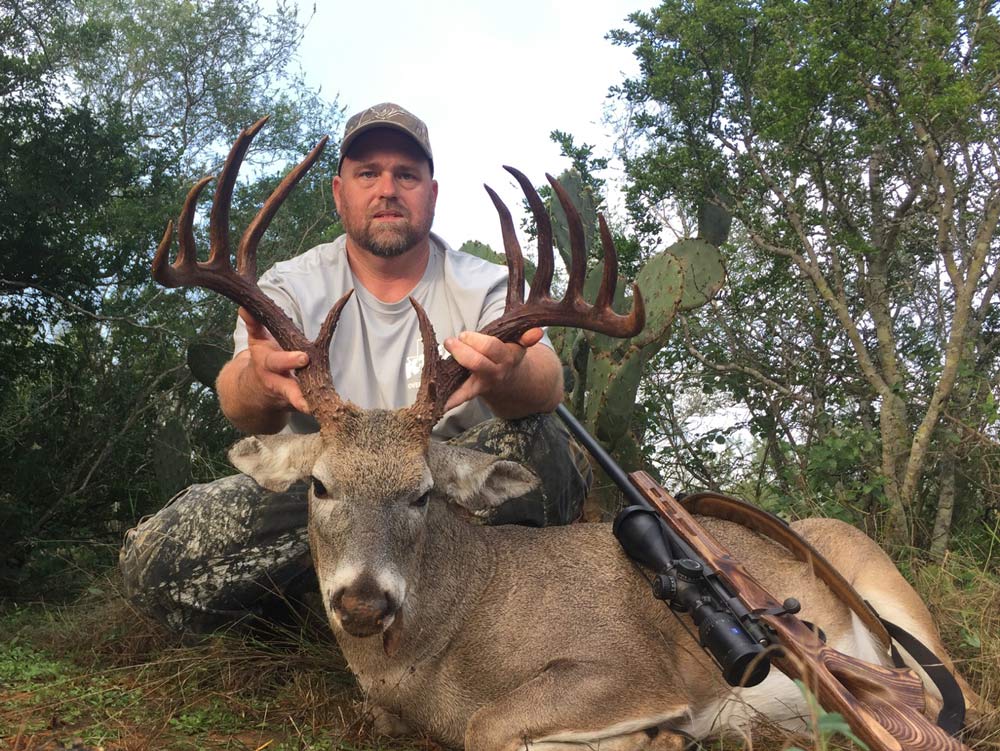 The best rutting activity is weeks away in south Texas, according to veteran ranch manager Brent Johnson. “We normally don’t see any good rutting action until close to Christmas,” he says. “So, we rely on our knowledge of mature bucks and where they like to hang out in order to get on them.” Keith Texter was hunting one of Johnson’s leases when he caught this pre-rut dandy moving during daylight. 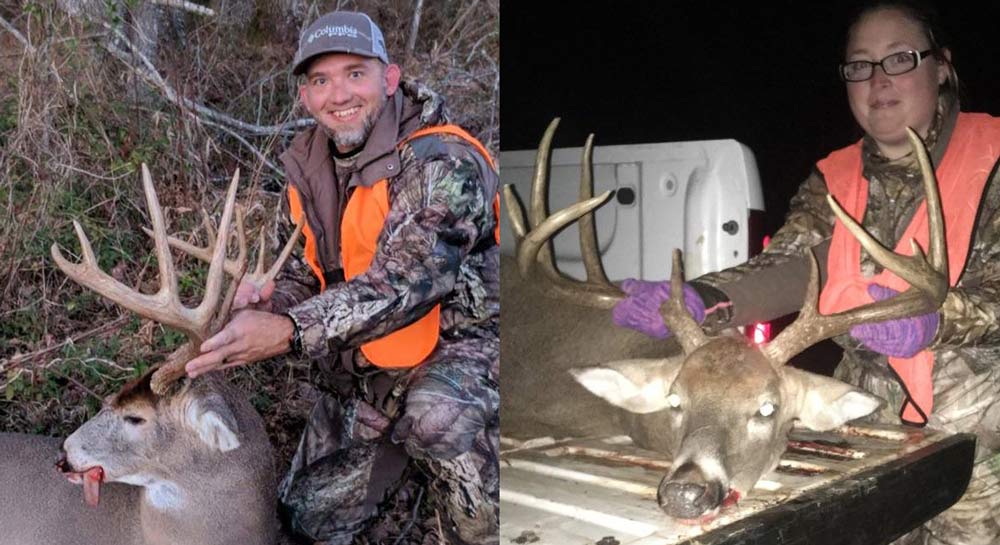 Bucks #8 and #9: Jeremy and Ashley Smith

Couple Double: Jeremy and Ashley Smith with a pair of wide-racked Kentucky bucks.

The Smiths were the guests of Larry Porter of Kenn-Tenn Hunting on the last week of the Kentucky rifle season. Jeremy’s 11-point buck was 22-1/2 inches wide and scored 162 B&C. Ashley’s buck—which she shot on the last hour of the last day of the season—was a 20-inch wide 10-point that scored 142. 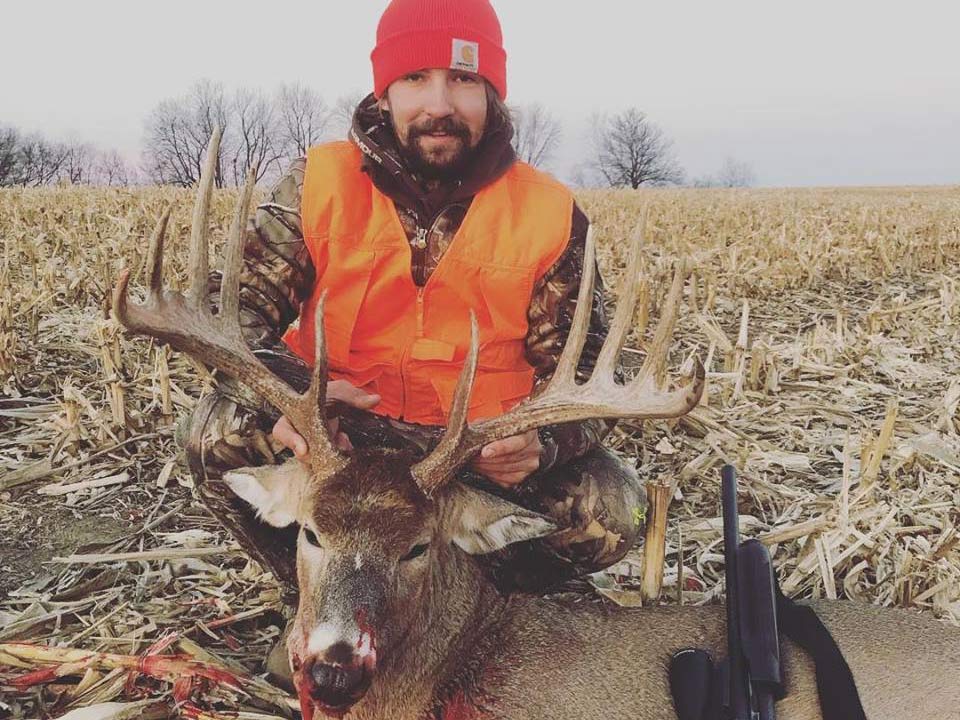 Redemption Time: Brenneman’s Iowa buck grossed a little over 160—despite a broken tine on its right side.

Iowan Brandt Brenneman shot this buck a month ago during the state’s archery season, but the arrow flew high and missed the deer’s vitals. Incredibly, the buck was totally healed up by the first day of Iowa’s shotgun season. Brennaman was sitting in the same stand on that Saturday opener—and this time he put the big deer down for good. 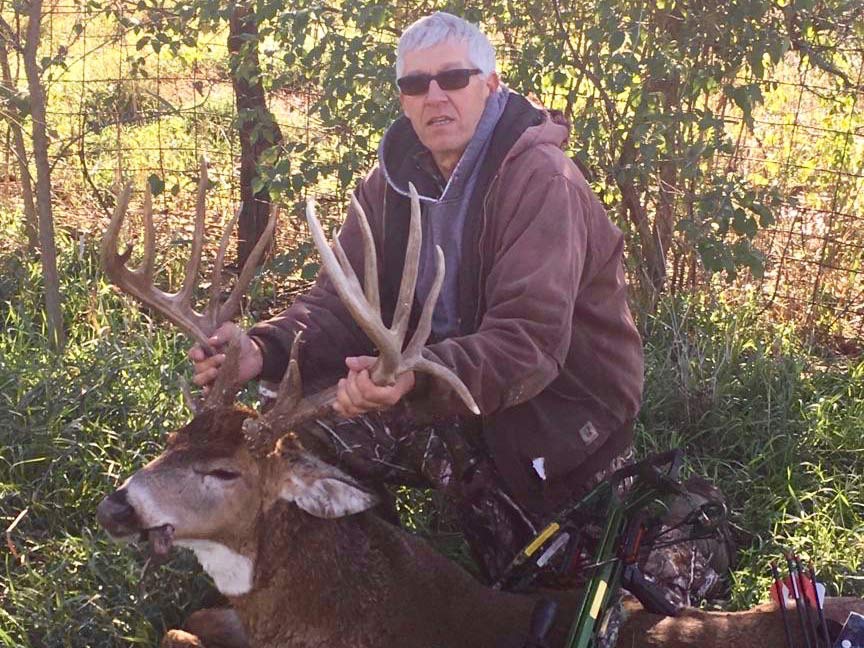 This huge Illinois crossbow buck came in just a little too late to be included in our last roundup. But we can’t ignore a stud like this, so we’re showing it to you now. Ray Grohmann arrowed the northeastern Illinois 19-pointer last month—his biggest buck ever.

On a national level, we’re in limbo land right now. Across much of the North, breeding peak is in the rearview mirror. But in southern states like Alabama and Texas the best is yet to come.

The good news for northern hunters is that unusually mild weather—which has suppressed overall deer movement—looks to be going away as a strong cold front bears down on the Midwest and sweeps eastward this week. Severely-dropping temps should put deer on their feet in search of food. Also, secondary rutting behavior should be kicking in within the next seven to 10 days. Hunters who focus their efforts on late-season food sources (think standing crops, waste grain, and acorns) should see some dandies.

In the south—and I’m totally jealous here—now is the time to search out that pre-rut buck sign that can put a giant in your lap before things get crazy. Walk out rub lines and search for primary scrapes, and the weeks ahead should produce some of the season’s hottest hunting.