These 15 Trophy Deer Made our 2017 October Big Buck Countdown

Hunting seasons are open in most of the major whitetail states, and some great buck pics are starting to hit... 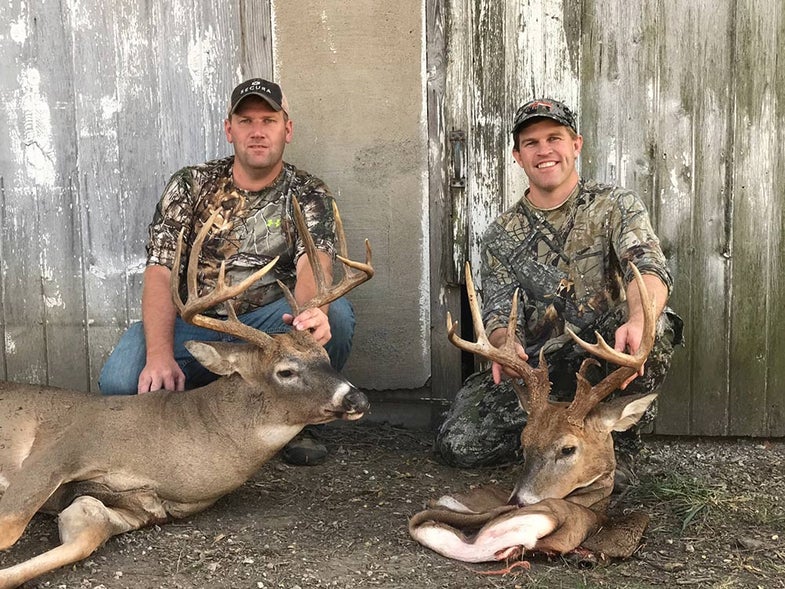 Double Take: Both Blakeman bucks were arrowed in oak stands.. none
SHARE

Hunting seasons are open in most of the major whitetail states, and some great buck pics are starting to hit my inbox. With the excitement of the rut still on the horizon, the best hunting is yet to come, but there are some fantastic deer already hitting the ground. Here are 15 dandies taken since October 1st.

Whitetail Properties agent Todd Bigbee had been keeping tabs on this incredible southern Kansas buck since last fall. “He was a 170-class buck last season, and we worked hard to avoid him, because we knew he’d be tough to pass, and because he’d be an absolute giant given another season,” he said. “This year he just exploded. I actually went to a ‘lousy’ spot on the opening night of muzzleloader because the wind was wrong for the ‘good’ spots. Shows what I know. This guy showed up and gave me a great shot.

Drury Outdoors team member Dawn Jensen has known this awesome Iowa buck for quite awhile. After checking trail cams this week, she found a spot where ‘Hook’ was moving during daylight. Jensen moved a stand mid-day, and the 160-class main-frame 10 showed on the first sit.

Kentucky outfitter Harry Pozniak (rivervalleyfarms.com) has been a long-time rut reporter and trusted source of all things whitetail for F&S readers. Harry took a little time off to hunt for himself, and arrowed this awesome 11-point. Not to be outdone, Pozniak’s wife, Jana, grabbed her bow and arrowed this pretty Kentucky buck as it visited a stand of oaks. Harry says the acorn crop is very good and the first good scrapes and rubs of the season are popping up. “All we need is a good cold front and it’s going to get really good,” he said.

Oklahoma bowhunter Garrick Harrison chased this Sooner State bruiser all last fall but couldn’t make it happen. Redemption came on this year’s October 1 opener, when Harrison got a crack at this 6-1/2-year-old buck—and sealed the deal.

We don’t have a single detail about this freakishly big buck, except that it was killed in Kansas. (The photo quality is rough, but it’s all we have for now.) If you know anything about this amazing deer, please let us know!

Continuing the we-want-more-details theme, all we know (or think we know) about this triple-beamed monster is that it’s an Illinois bow kill that came from McClean County.

Missouri can’t fly under the radar of serious deer hunters much longer if it keeps coughing up giant bucks like this one. Show Me State bowhunter Ryan Foster tagged this 21-point whopper in Clay County on October 8.

Alexys Palmatier is only 11 years old, but she made a veteran bowhunter’s shot on this great Pennsylvania 8-point. Though it may not rack up the B&C inches, Palmatier’s big-shouldered buck weighed 200 pounds and was making regular visits to an apple tree.

Mike Jahnke has killed a great buck in each of the last four seasons while hunting with Kansas’ Wicked Outfitters. This year’s giant was one that owner Whitney Fouts knew well; a monster 10-point she’d named “Jordan” for its resemblance to the Jordan Buck (the #2 B&C typical).

This is one of those “amazing if it’s true” photos that land on my phone once in awhile. What looks like a shed lying by a fallen tree actually appears to be an entire buck lying under the deadfall. Sad to see a nice buck go this way—but if you’re slow enough to let a tree fall on you, you’re probably not long for the world anyhow.

Brothers Jeff and Evan Blakeman were hunting their property in Putnam County Missouri last weekend, hoping to get a handle on deer movement for the upcoming rut. Well they obviously did far better than that, tagging this pair of awesome bucks.

Iowa is a big-buck stronghold, but most of those giants fall during the rut or late season. That wasn’t the case for Mark Drury this year. He shot this heavy, tall-tined monster as it visited a green food plot surrounded by timber.

This is supposed to be a list of October bucks, but we’ll make an exception for this monster 7-point Missouri buck shot by Taylor Drury. “Forky” had roamed the Drury farm for many seasons, but on September 28th made the mistake of walking within 20 yards of Taylor, as she waited in a blind overlooking clover.