Although the deer season’s primetime is still about a month away, bucks are starting to lay down sign and test... 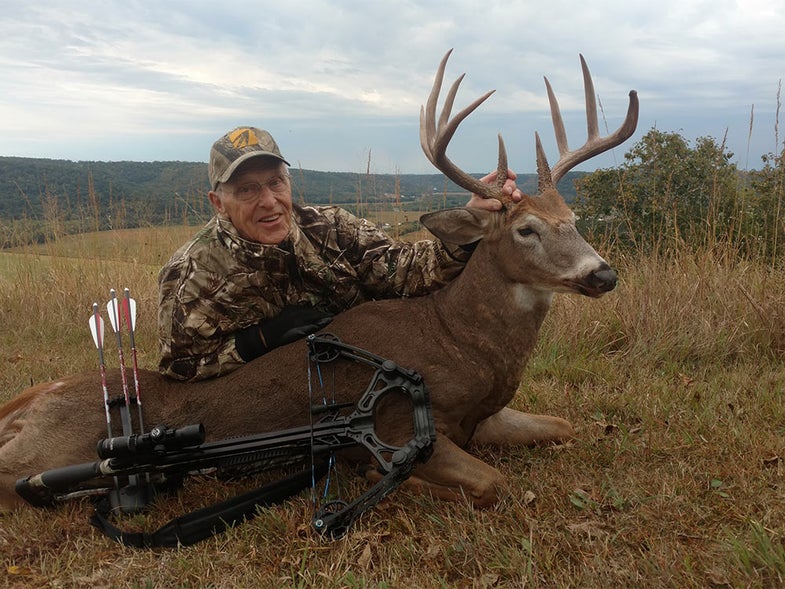 Although the deer season’s primetime is still about a month away, bucks are starting to lay down sign and test one another—and a handful of hunters are already putting tags or some real giants. Need proof? Here it is, our first weekly big-buck roundup for 2017. Every Friday—from now through the rut and well into the late season—we’ll be posting some of the top bucks taken around the country, plus timely advice for tagging your own beast of a buck.

Here’s what went down this week—plus, this being the year’s first roundup, a few that went down a little early in the month.

This deer gets top billing for personal reasons: the hunter is my dad, Marv Bestul. He’s 87 years old, and this pretty southeast Minnesota 9-point is his first buck with a crossbow. The 3-year old came to a watering hole two hours before dusk on Sept. 18.

September 18 was a pretty special day in my local deer woods. Less than an hour after my dad shot his buck, my neighbor and friend Dave Olson shot this 4-1/2-year-old bruiser. The buck came to an apple tree growing on the edge of a food plot. Dave had actually missed this buck last fall and had collected numerous trail-cam pics since.

The first big buck to hit my inbox this fall, this fantastic velvet whitetail was killed by Kentucky hunter Tyler Porter on opening weekend. Porter had dozens of pics of the 170-class buck throughout the summer and made a perfect shot on his first opportunity at the trophy.

Mark Drury makes an annual trip to Alberta to hunt mulies with outfitter Corey Jarvis of Three Rivers Adventures. Drury and Jarvis stalked within 25 yards of this 190-class velvet giant on opening morning. The buck bedded for 8 hours while Drury and Jarvis sat in 80-degree heat, waiting for the buck to stand. Finally, something spooked some nearby does, the buck rose, and Drury made the shot.

Fillmore County, Minnesota hunter Brady Boyum shot this hefty 160-class whopper on the opening night of Minnesota’s archery season. The buck was routinely visiting a small area containing apple and plum trees growing close to deer’s bedding area. Boyum had guided several buddies to their treestands before crawling up to his own setup. The giant buck appeared only 15 minutes later, and Boyum made a perfect shot.

Minnesota hunter Steven Koenen heard a buck fight break out near his stand, and when the winner emerged from the cover, Koenen recognized the buck immediately; the upturned beams and tall G-3’s made the buck he’d named “Matt” easy to distinguish.

You hate to see them go this way. This whopper roadkill buck from the Sooner State is rumored to gross over 200 inches. Oklahoma is gaining ground as a destination for serious whitetail hunters, and this buck shows why.

EHD has been a big concern in Iowa this summer, thanks to hot temps and large areas that received almost zero rain. This Mills County buck was found recently. It’s not clear if the deer was an EHD victim or vehicle victim, but it’s an a mazing animal either way.

Finally, here’s one that gives my dad’s buck a run for its money as my favorite of the month. This is Nolan Freeman and “Eclipse,” the monster drop-tine buck he took with a muzzleloader during the Iowa’s recent youth hunt. At 6-1/2, Freeman may actually be younger than his buck.

Warm—and in some cases flat-out hot—weather kept buck movement down a bit during the initial weeks of early bow seasons in many states. But that is quickly changing, and cooler temperatures should have you heading for your stand this weekend and next week. While some dandies have fallen so far, my general impression is that we’re behind the normal pace. Season openers are yet to come in many top areas, and I’m expecting more big deer photos to come as states like Iowa, Illinois, and Texas open in the next few days.

It’s been dry across much of the country, which should make lush, green food sources especially appealing over the next few days. Find the freshest buck sign along the edge of the grub, set up with a good wind, and get there early, as the cooler weather should have deer hitting those evening food sources a little sooner. Good luck—and when you kill your trophy, send us a picture.