Last week, Missouri conservation officials confirmed, for the first time since 1994, the presence of a female mountain lion in... 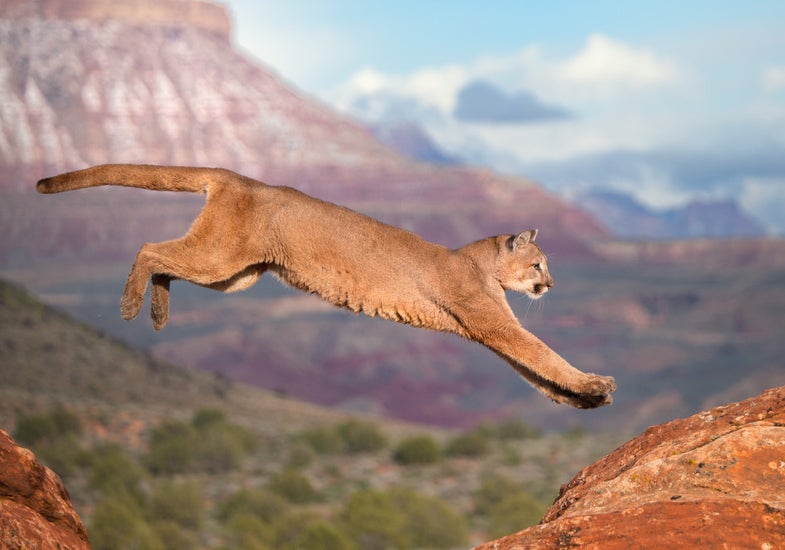 Last week, Missouri conservation officials confirmed, for the first time since 1994, the presence of a female mountain lion in the state.

In February 2016, a brain-worm-ridden elk, showing signs of attack, was found in Shannon County, Mo. The Department of Conservation took saliva samples from the partially eaten animal and were stunned when tests turned up female cougar DNA.

Since the early 1990s, there have been 68 confirmed cougar reports in Missouri, along with many unverified sightings. Female cougars, though, are nearly unheard of. “Mountain lion males will disperse over very long distances,” Laura Conlee, a DOC biologist, told the Springfield News-Leader. “All of the mountain lions we’ve confirmed so far in Missouri have been males. There was just one killed by a car last week in Warren County, and it was a male.”

Female cougars are uncommon in the region because they prefer to live and hunt near where they’re born. For this lion, that would likely be in the Black Hills, near the border of South Dakota, Wyoming, and Nebraska.

“We know that a lot of lions have dispersed from the Black Hills,” Matt Peek, a biologist for the Kansas Department of Wildlife & Parks, told the Kansas City Star. “They’re more likely to come across Nebraska from west to east following the river, which leads them to Missouri.”

Conlee is unsure whether the cougar will remain in the area, noting that it’s just as likely that it will continue moving. Also, she adds that there is still no evidence that the state has a breeding lion population.

In Missouri, mountain lions are protected under the Wildlife Code, which prohibits hunting but allows the killing of an animal should it threaten life or property.