Saving an SKB 100 from the Cowboys 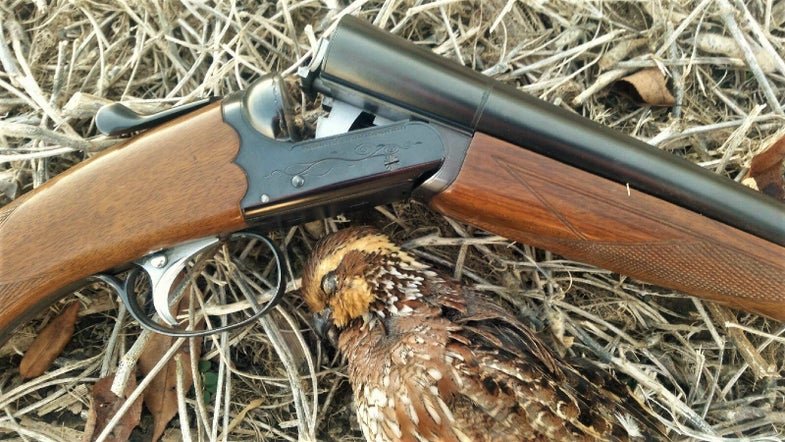 That’s my new used SKB 100 in the picture. It’s a rescue gun. I have saved it from being cut down into some modern cowboy’s coach gun.

Until now, I had nothing against cowboy action shooting, which is more or less three-gun shooting with late 19th century firearms. If people want to dress up in period clothes, give themselves a western alias and shoot targets simulating stage robberies and saloon shootouts, that’s fine. It’s probably a lot of fun. I’ve watched it on Youtube. Some of those cowboy action shooters can really shoot. They use lever-action rifles, single-action revolvers and side-by-side, pre-1899 pump, or lever-action shotguns. Again, all fine, except I learned a while ago that means some old Winchester Model 97 pumps get their barrels cut down to twenty inches, which isn’t great, but, whatever. There are a lot of 97s around and they make a good riot gun. Then I found out that, since the coach guns on the market don’t hold up well under the stress of competitive shooting, some cowboy action shooters buy old Savage Stevens doubles and cut them down. Well, okay, again, not great, but I can live with it. Those are good old cheap guns but hey, cowboy action shooters need shooting irons, too.

Now I come to learn that the hot guns among some cowboy action shooters are SKBs and the Browning BSS. They like them because they are very good guns and don’t give them the problems they run into with the cheaper doubles. So there are gunsmiths who specialize (specialize!) in chopping the barrels off these guns and tuning them up so the Paramus Kid and friends can use them to shoot balloons and falling plates.

Now I’m upset. Cutting the barrels off a neat old bird gun is no way to treat it.

The SKB, in its various grades (100, 200, 280 etc) and the BSS, both made in Japan, were excellent, reasonably priced double guns of the 60s and 70s at a time when there were no more good American doubles to be had. Ithaca imported the SKB guns, which have no relation at all to American made Ithaca doubles. The 20-gauge Model 100 weighed under six pounds and is one of the best close cover woodcock guns ever offered to American hunters. The SKB 100 had only one quirk: the scalloped edges where the stock meets the receiver will crack if the gun is fed too much heavy ammunition, although they can be readily repaired. Otherwise, they are trouble-free and sweet-handling guns.

I wouldn’t mind people cutting these guns down if more were being made every day, but they’re not. The SKB factory is gone (tooling for the BSS was all destroyed years ago) so there won’t be any more made, ever. At the very least, demand for these guns drives up the price, but what’s worse, every one that has its barrels cut off for cowboy action shooting is, essentially, ruined beyond repair* as a hunting gun. It shouldn’t be allowed.

I can’t save all the SKBs, but I got to this one before a cowboy found it. It’s in great shape and its 28-inch, Modified and Full barrels will stay that way, and I have high hopes for it as a pheasant gun. I’ve shot it some, and have done okay but not great with it. I’ll probably put it away and practice with it more next summer prior to the season. In the meantime, it’s locked away from anyone with a cowboy hat and a hacksaw.

You could have new barrels made and sleeved onto the monoblock, which would cost you more than twice what either gun is worth.