Zinke Comes Out Strong for Sportsmen Day One as Interior Secretary

On Thursday, a day after receiving Senate approval for his position as head of Department of the Interior, Secretary Ryan... 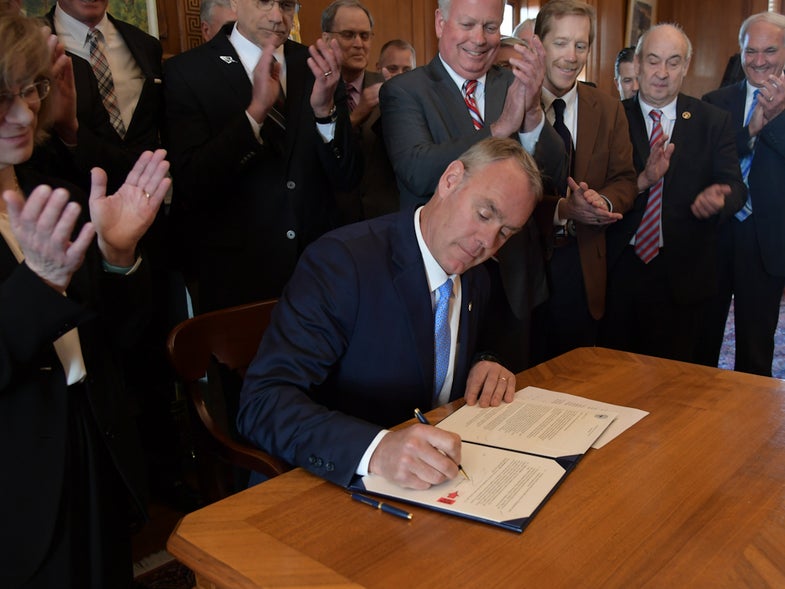 On Thursday, a day after receiving Senate approval for his position as head of Department of the Interior, Secretary Ryan Zinke signed two secretarial orders that sportsmen’s groups are hailing as positive signs for his support of hunting, fishing, and outdoors interests.

The first order, No. 3346, overturned highly contentious lead ammo and fishing-tackle bans on U.S. Fish and Wildlife Service properties and waters. The second order, No. 3347, directs bureaus and agencies to identify areas where recreation and fishing opportunities can be expanded on federal land. Moreover, the order instructs the Department of the Interior—which oversees the Bureau of Land Management, U.S. Fish and Wildlife Service, and the National Park Service—to seek recommendations from the Wildlife and Hunting Heritage Conservation Council and the Sport Fishing and Boating Partnership Council for expanding and enhancing hunting and fishing opportunities on federal public land.

In a statement, Ducks Unlimited CEO Dale Hall said that he considered the orders a clear indication that Zinke will be a voice for sportsmen in the Department of the Interior. “Providing places for all Americans to hunt, fish, and recreate is vitally important,” said Hall, who was present for the order signings, “as hunters and anglers are North America’s greatest conservationists. I want to thank Secretary Zinke for his strong commitment and look forward to working with him in his new capacity at the Department of the Interior.”

Prior to Zinke’s receiving Senate approval, sportsmen’s groups widely endorsed the Montana Republican for the job. By and large, Zinke was seen as a proponent of keeping Western public lands under federal control, as opposed to transferring them to states, as some of his now-former House Republican colleagues have advocated. In January, however, Zinke voted in favor for a rule change making it easier for Congress to transfer public lands to states, and received swift backlash for the move. Zinke has also incurred criticism for considering expanded drilling and mining activities on public lands.

Despite these controversies, in a conversation with Field & Stream on Tuesday evening, Land Tawney, CEO of Backcountry Hunters and Anglers, said that Thursday’s orders set a good tone for Zinke’s tenure as interior secretary. “He’s listening to sportsmen,” Tawney said, “and he’s responding.”

Also, it’s worth noting that Zinke rode a horse to work yesterday, as seen above.