A look back at the life and accomplishments of Lt. Col. Jeff Cooper, the embodiment of 20th century America. 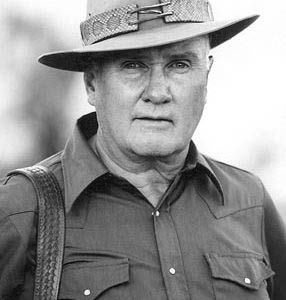 Some of you may recall a Sopranos episode from 2002 in which Karen Baccalieri, wife of Bobby Baccalieri, is killed in an automobile accident. Bobby is devastated, and keeps the last thing Karen ever cooked—a ziti—in the freezer. When asked why he doesn’t eat it, he explains that when it goes, she is truly gone.

So it was that I waited a long, long time to buy Jeff Cooper’s Gargantuan Gunsite Gossip 3. I had volumes 1 and 2, but when I read 3 that would be it—nothing more of Jeff Cooper, who died in 2006. The GGG series is a compilation of newsletters that Cooper put out from roughly the early 1980s until his death, and it’s a series of short essays on whatever interested him, which was just about everything.

I became a Cooper fan in the summer of 1958, when I got two of his early softcover books, Custom Rifles, and Fighting Handguns. I read them to rags, and got in trouble during my senior year in high school when I was caught reading Fighting Handguns during study hall.

Cooper’s convictions were cast in bronze. He detested ARs (“mouse guns,” he called them), the .223, most new guns, political correctness, women soldiers, rifle scopes, bad triggers, gutless politicians, modern education, the SHOT Show (although he went), and shooting off a bench. He worshipped the United States Marine Corps, the United States of America, bolt-actions, the .30/06, the Model 1911 pistol, the M2 Browning Heavy Machine gun, the English language, Winston Churchill, Theodore Roosevelt, and military heroes, regardless of the army in which they fought.

Cooper is a time capsule. He’s the embodiment of 20th century America before World War II, the pure distillation of the Greatest Generation, and if you’d like to see what they thought and believed, you’ll find it in his writing.

He was a highly educated man who graduated from Stanford and then, like most people whose college has done its job, continued his schooling afterward under his own steam. He was not so much an original thinker as a person who codified things into systems. Knowledge, to him, was something that should be organized so you could use it.

He could take considerable satisfaction in knowing that what he did, and wrote, lives on. Gunsite Academy, which he founded, is still very much in business. His books are still in print, and you can get them from Gunsite. The Scout rifle, which he developed and championed, is still made by half a dozen companies. The Model 1911 .45, which Cooper considered one of the supreme inventions of the 20th century, has become, if anything, more popular 107 years after its invention.

I met him for the first time in the mid-1960s in upstate New York. He was traveling the country giving demonstrations to police departments of what he called the Modern Technique (of combat shooting with a handgun, so that you could actually hit what you were shooting at). He was a tall, long-legged (what the Marines call “highpockets”) fellow with a short haircut, an old Rolex watch, and a 1911 in a buscadero rig. Someone asked him to demonstrate his fastest draw.

He said, “You don’t draw,” and with that, he simultaneously bent his knees, rocked his torso back, jammed his hand down on the gun so that the muzzle pivoted up, and shot through the open bottom of his holster. The whole thing was instantaneous, and there was a moment of stunned silence from the cops in attendance. If you tried to draw against that, you’d die for your trouble.

His end was a cruel one. When he was an old man, he fell and broke his back. As happens with the elderly, it did not heal, and he was confined to a wheelchair. For a man as active as he had been all his life it must have been excruciating, but it did not stop him from shooting or writing. He never complained. Occasionally he mentioned that he could not hunt any more, but that was it. In July 2006 he fell again, and did more damage. He was too weak for the surgery that might have repaired it. On September 25th, at age 86, he died.

The very last entry in GGG 3 is a quote from historian Bertha Calloway:

“We cannot direct the wind, but we can adjust the sails.”

And that was just what he did. Semper Fi, Chairman Jeff.