Have you got the skills to hunt with a flintlock? 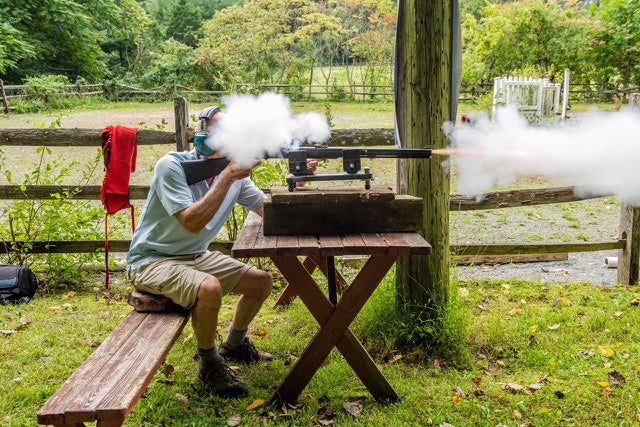 When the gun went off, I may not have flinched. But I sure wanted want to. There were, as the photo above shows, two clouds of smoke. The first came from the flint striking the frizzen, setting off the spark needed to ignite the powder in the pan. The powder burned and smoked there for a second, as if thinking things over, before it persuaded the touch hole to let it into the chamber to ignite the powder that sent the ball down the barrel.

Dave Ehrig, known as “Mr. Black Powder,” called “Nice shot” from behind me. And sure enough, just 25 yards downrange—the distance he sights a muzzleloader at—I’d punched a hole just 2 inches below the bull’s-eye.

Pennsylvania, to my knowledge, is the only state with a flintlock-only season, starting just after Christmas and running for two weeks. That’s when guys like Ehrig like being in the woods best. Ehrig, whose book Muzzleloading for Deer & Turkey runs to 472 pages and covers everything you need to know and then some, loves all front-loaders. But flintlocks, the gun with which we earned independence from England, have a special place in his heart.

“They’re the most primitive ones, the hardest to master, the PhD of firearms systems,” he says. And their range—you aren’t allowed to use optics on ’em in PA, though you can put fiber-optic sights on them—is short. Ehrig has shot multiples of almost every big-game animal in the U.S., including a 200-yard shot on a caribou in Alaska. “At first, he didn’t react at all. Then he made a few tight circles before he fell dead.” Still, Ehrig maintains, a good marksman who can kill a deer at 50 yards is a rarity.

He gave me and photographer Randy Harris more things to remember than I can remember about how to clean, load, and maintain a flintlock. Just enough to decide I wanted his book with me if I ever went hunting alone.

I shot twice more. One was just under a half inch from the target’s crosshairs, the other less than a quarter. “You’re a killer,” was Ehrig’s verdict. At that point, Harris volunteered to let me try the much longer barreled and beautifully worked flintlock his dad had made, but I declined.

“I kinda like where I am right now,” I said.